From David Nelson's awesome touchdown celebration to Mike Smith's decision to go for it on fourth-and-one in overtime, here are the best and worst plays from Week 10 of the 2011 NFL season.

Like we did last week, and every week before that, here are the five best and worst plays from Week 10 of the 2011 NFL season. We'll start with....

At this point in Devin Hester's six-year career, you'd think that teams would be smart enough to not put the ball in the hands of a guy who has returned 12 punts and five kicks for touchdowns. It just doesn't make sense why a team would take that chance.

The Bengals were trailing the Steelers by two touchdowns when Andy Dalton rolled out to the left and heaved a pass into the end zone towards fellow rookie wide receiver A.J. Green. Green was in double coverage. He was surrounded by safeties Ryan Clark and Troy Polamalu...but double coverage doesn't stop Green.

Unfortunately, Green was hurt on the play and he only made it on the field for a few more plays after that.

In the process of the Cardinals win over the Eagles in Philadelphia, wide receiver Larry Fitzgerald scored two touchdowns. The following video isn't one of those touchdowns but it is an amazing catch that set up the Cardinals for their game winning touchdown.

A week after showing flashes against a very good Bengals defense, Chris Johnson finally had the breakout game so many fantasy owners, and Titans fans, were waiting for. Johnson ran the ball 27 times for 130 yards and only his second rushing touchdown of the season.

Is this the spark that Johnson needed to play like the Chris Johnson that we all know and love, or fear, or is it just lucky game?

After scoring a touchdown, Bills wide receiver David Nelson decided to give the ball and a nice hug to his girlfriend. His girlfriend happened to be one of the cheerleaders on the opposing team, the Dallas Cowboys.

It was announced before the Eagles' Week 10 loss to the Arizona Cardinals, that DeSean Jackson, one of the team's starting wide receivers with a ton of big-play ability would be benched because he overslept and missed a team meeting.

Without Jackson, Vick only managed 128 passing yards and the Cardinals secondary was able to limit all other receivers to under 60 yards.

After throwing an interception to Bears cornerback Tim Jennings, Lions quarterback Matthew Stafford took off down the field to try to stop the interception from turning into a pick six. However, instead of getting to Jennings, Stafford looked more interested in tearing D.J. Moore's head off.

Of course this caused a bench-clearing brawl which Stafford did everything he could do to avoid.

The Browns had a chance to win their Week 10 matchup at home against the St. Louis Rams with a 22-yard field goal. They lined up for the game-winner and everybody figured that they would make the kick and that would be that. However, after a snap that practically rolled to the holder, the kick went wide left and the Rams won the game by one point. It was later confirmed that defensive end James Hall deflected the kick, but after that bad  snap the kick probably would've been wide anyways.

You can watch the missed game-winning kick here, or you can just watch this video which was made after their Week 9 loss to the Texans in Houston:

The Colts are easily bad enough to go 0-16 and win the Andrew Luck Sweepstakes. Curtis Painter was benched after being ineffective and was replaced by Dan Orlovsky, who was on the only other team to go 0-16, the 2008 Detroit Lions. The Colts only managed three points against the Jaguars and in the end it didn't matter if it was Painter or Orlovsky, the Colts just sucked.

Here are the game's highlights. There isn't anything to see, though.

The Saints and the Falcons were in overtime in Atlanta. The fate of the NFC South hangs in the balance. The Falcons had the ball at their 29-yard line and it was fourth-and-one. If they punt, they risk the Saints driving down the field and scoring. If they go for it, they can keep the ball and score themselves but if they don't make it, they hand the Saints the game.

Well since it's my worst play of the week, you already know what happened.

Here's how the Falcons and Saints were lined up before the play.... 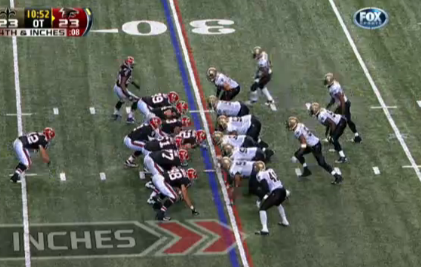 And here's how far the surging Saints defense line pushed back the Saints offensive line by the time Michael Turner got the ball. 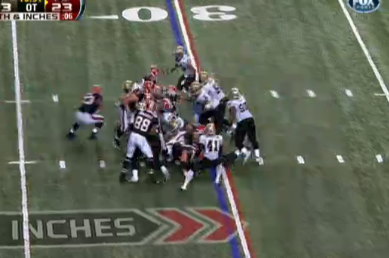 Needless to say that the Falcons didn't make it and the Saints won in overtime without much of a problem. I'm assuming that Sean Payton shook Mike Smith's hand and thanked him for the gift as the teams left the field.