Matt Schaub Injury: What's A Lisfranc, And How Long Will Recovery Take?

Houston Texans QB Matt Schaub has a Lisfranc injury. Unless you're a doctor, that probably means nothing to you. Let SB Nation's Medical Expert explain what exactly that is and the possible prognosis for Schaub.

Share All sharing options for: Matt Schaub Injury: What's A Lisfranc, And How Long Will Recovery Take?

The Houston Texans have marched to the top of the AFC South despite long-term injuries to two of their top performers, WR Andre Johnson and OLB Mario Williams. But with Matt Schaub suffering a Lisfranc injury to his right foot in the Texans' 37-9 victory over Tampa Bay on Sunday, the Texans may have lost their quarterback for the season, and in time, maybe their grip on the division.

Although the Texans have a bye upcoming and Head Coach Gary Kubiak would only definitively rule Schaub out for Week 12 against Jacksonville, recovery from a Lisfranc injury, which involves the bones and ligaments of the midfoot, typically requires months rather than weeks for a full recovery. This clearly places Schaub's 2011 season in jeopardy, and the major concerns for the remainder of Schaub's career and beyond will be whether the injury heals sufficiently to prevent chronic pain and stiffness of the foot. This will depend upon the exact nature of the injury and how easy it will be to realign the damaged areas of the midfoot, a proposition that may require surgery.

The Lisfranc joint is the point at which the metatarsal bones (the long bones that lead up to the toes) and the tarsal bones (the bones in the arch, which include the cuneiform bones) connect. The Lisfranc ligament is a tough band of tissue that joins two of these bones. It is important for maintaining proper alignment and strength of this joint. 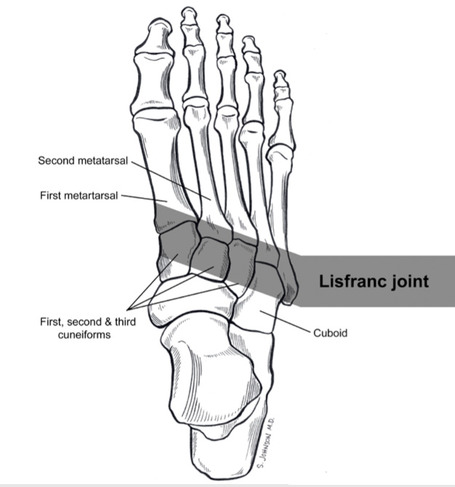 Lisfranc injuries occur as a result of trauma to the midfoot. In the case of a football player, a Lisfranc injury most commonly occurs when the forefoot is planted on the ground with the heel in the air. A downward or twisting force on the heel causes stress on and potential damage to the foot.

There are three types of Lisfranc injuries, which sometimes occur together:

A Lisfranc injury is initially diagnosed based on the history and description of the injury. A patient may describe the immediate onset of pain in the midfoot region. There may be difficulty or even an inability to put weight on the injured foot. Over the course of the ensuing days, swelling and bruising often occurs, and on a physical exam, the injured patient will be tender over Lisfranc's joint.

Any suspected injury should be evaluated studied initially with x-rays of the foot. When an injury occurs that involves a fracture in this region, a CT scan or MRI are best for evaluating the complex bony detail of the region. MRI in particular is helpful in detailed evaluation of the ligaments, and it can see bruising in the small bones of the foot, which indicates an acute injury.

If testing determines that the injury is stable, with the bones still in their proper orientation, a Lisfranc injury may be treated with a period of non-weightbearing followed by gradual return to normal activites. For a stable Lisfranc injury, treatment begins with a period of immobilization either in a removable boot or frequently a cast that includes the foot and the leg below the knee (a short leg cast). This typically lasts 6 to 8 weeks with the patient using crutches and not allowed to put weight on the injured extremity.

If the injury is unstable, or even if the suspicion is there for it to be unstable, then surgical treatment is warranted. The timing of surgery depends on the amount of swelling and the status of the skin overlying the injured foot. If there is too much swelling or the skin is in poor condition from the injury, a short period of elevation and swelling control is warranted prior to surgery. Surgery typically involves rigidly stabilizing the injured joints. The specific midfoot joints that are stabilized depend on the specific ligaments that are injured and may vary somewhat on a case-by-case basis. The majority of the time, stabilizing the injured region requires one or a few relatively small incisions, the placement of screws and in some cases wires. By holding the involved joints rigid, the torn ligaments are allowed to heal.

Postoperatively following a typical Lisfranc joint repair, the patient must be non-weightbearing on the operative foot for about 6-8 weeks. Subsequently, the amount of weight bearing allowed is gradually increased over the next few weeks, followed by physical therapy. At some point, once the torn ligaments have been given sufficient time to heal, the screws used to fix the Lisfranc injury are removed to allow normal motion and function to take place in the midfoot region. Although the actual timing is somewhat controversial, this usually occurs somewhere between 3 and 6 months after the first operation takes place.

The greatest concerns following treatment of a Lisfranc injury are whether the patient can regain his pre-injury mobility and, over time, whether arthritis of the joint may occur. Perhaps the most prominent NFL player to suffer a Lisfranc injury in recent years was former Eagles and Steelers' RB Duce Staley, who never quite returned to his previous level of play afterwards, proving just how difficult it is to regain full mobility of the foot.

Schaub has never been known for his mobility, and unlike a running back, for whom flexibility of the entire foot is of paramount importance, a quarterback is more likely to be able to return to his previous level of effectiveness after a Lisfranc injury has healed. The biggest issue Schaub may face on the field is due to the fact that, as a right-handed quarterback, he plants with his right foot when setting up to throw. Any lingering pain or stiffness in the right midfoot could potentially affect the power he generates from his lower body during his passing motion, not an issue that is likely to derail Schaub's return to the playing field, but something he will have to play through in the future.

Either way, the road to recovery from a Lisfranc injury is often an arduous one, and it stands to reason Matt Leinart - and not Matt Schaub - will be leading the Texans if they make it to the playoffs this season.