Tim Tebow And The Option Offense: Breaking Down The Film

How does Tim Tebow's spread offense work? What's the best way to stop it? We answer both those questions while taking a look at the film of Tebow and the Broncos offense.

Share All sharing options for: Tim Tebow And The Option Offense: Breaking Down The Film

Tim Tebow and his spread/option offense with the Denver Broncos have taken the team to 6-5 (5-1 with Tebow as the starting quarterback) and second in the AFC West behind the Oakland Raiders. Their running game is taking off -- it's currently fourth in the NFL -- but they're almost dead last in passing yards per game.

With all the hype surrounding Tebow, let's take a look at some of the staples of his offense, explain how they work and why they're successful, and propose a few solutions to stopping him. 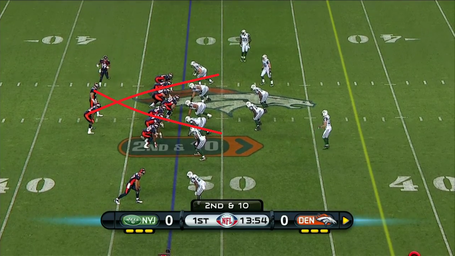 Here we see a very simple option run. Tebow stands back in the shotgun and has the choice (or option) to either hand it off to the running back, allowing him run to the left tackle, or take it himself and run to the right tackle. 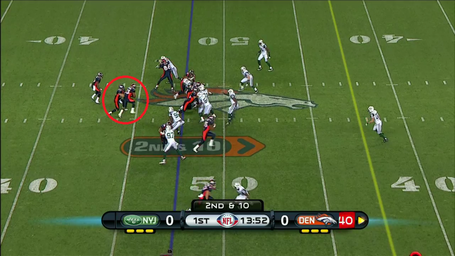 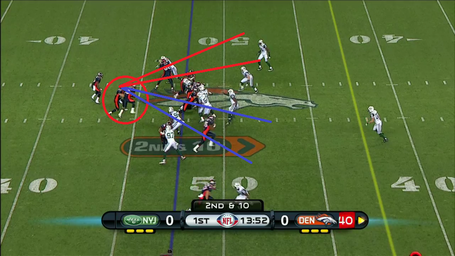 But really he's just buying time to make a quick read on the defense. He has to decide who he thinks will be more successful on the run -- himself or the back. 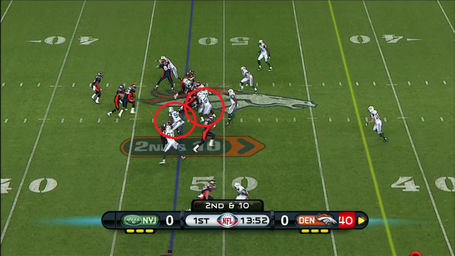 We saw this play more than a few times against the Chargers this past Sunday as well. 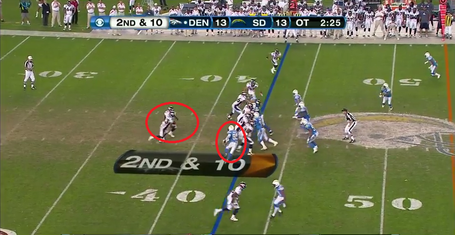 This play comes late in overtime. Tebow is reading Chargers linebacker Shaun Phillips here. Phillips' assignment is outside containment, but he over-commits to the inside and Tebow takes advantage. 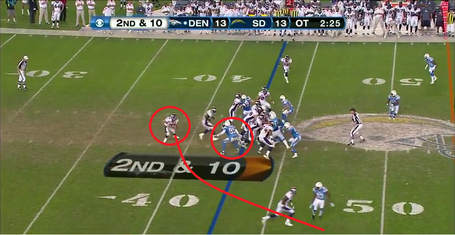 Tebow keeps the ball for himself. Phillips has blown his assignment, leaving a big gap for Tebow to thunder through. 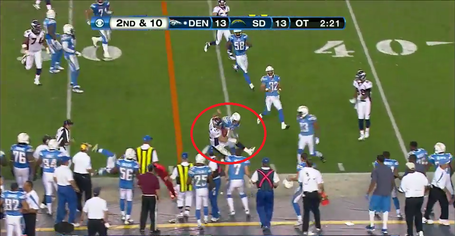 First down. You can’t allow Tebow to run this easily.

Another often-used play (with multiple variations) in the Denver offense is the triple option run. As we just mentioned, there are many different variations of how you can use a triple option run play, but the concept is the same -- the quarterback now has three options to choose from. 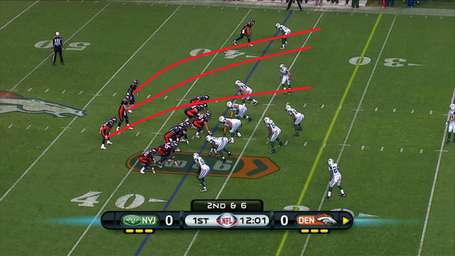 Here we have Tebow in the shotgun again. He has two backs in the backfield, one on either side of him. He's going to take the snap and head to his left. 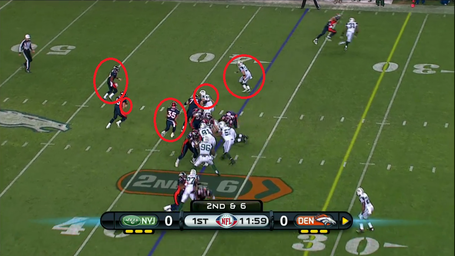 The two backs follow to the left. On this play, the Jets safety has come into the box to help in run support. He recognizes the runner on the outside early and gets to the edge to stop it. The Jets outside linebacker has set the edge and is also in a position to make a play on Tebow should he decide to keep the ball himself. 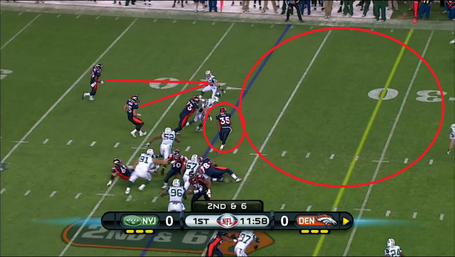 The combination of the Jets outside linebacker setting the edge and the Jets safety coming down on the outside really makes Tebow’s decision an easy one. Tebow takes what the defense gives him, and tosses a shovel pass inside, where the other back has a big hole to run through.

Looking at the game against the Chargers, the Broncos run a slight variation of this play in the first quarter. 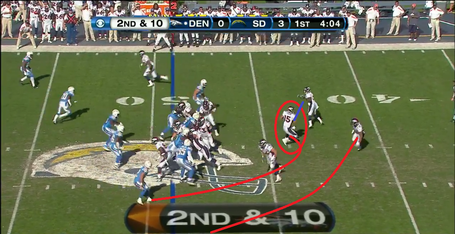 Tebow fakes the toss to one side, dragging the defense toward him, and then turns and runs to the left with one option outside him. 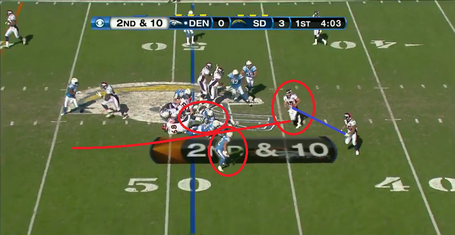 Tebow again has the choice to toss it outside or run it himself. He reads the defense and realizes there's an outside contain man in position to make a play on the toss, but his offensive line has cut blocked the defensive line. This creates a nice big hole for him to run into; Tebow takes the ball himself and gets 11 yards and a first down.

There are many ways to stop option runs. As Mike Mayock said on Thursday Night Football, to stop it you need to A.) have good gap responsibility, B.) trust your reads and C.) avoid getting caught up in the trickery. But with Tebow at quarterback, I’d like to see teams run a cover zero. (If you are unfamiliar with it, here's some more information on that.)

The basic point of cover zero is that the defense designates a man to cover every potential receiver (including tight ends, running backs and fullbacks), and each defender that has an assignment reads and reacts to their man. If his man runs a route, the defender drops into coverage and covers him, but if the man stays in to block, the defender has a license to blitz. This leaves the defense with no deep cover but one more blitzer than the offense can block. This would really test Tebow’s ability to get the ball out quickly and accurately, which is still a question mark with him.

One example of the cover zero defense comes from the Tebow touchdown run. That may seem like an odd play to use as an example considering the outcome, but the play call is exactly right; the execution is wrong, and doomed the Jets. 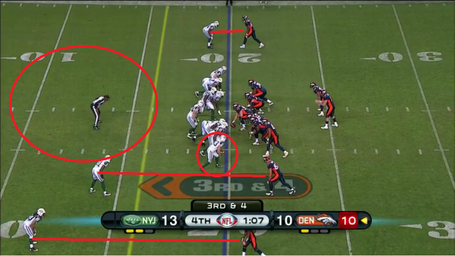 You can see that the Jets have no safety help over the top. They have three defensive backs covering receivers, with everyone else stacked on the line of scrimmage. The key man to watch here is circled in red, safety Eric Smith. 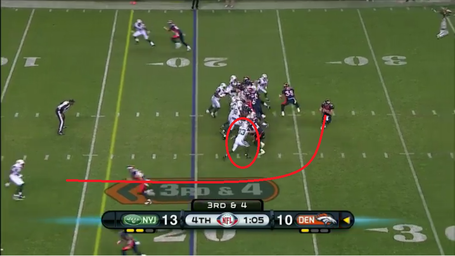 Smith has the outside containment but over-commits inside, allowing Tebow to scramble outside and downfield for a 20-yard game-winning touchdown. If Smith holds his responsibility on the outside,Tebow is forced to throw or take a sack.

Obviously, forcing Tebow to throw is a good thing. Running complicated coverages and blitz packages are just a lot of wasted effort with him -- he'll just tuck it and run. The cover zero will force him to throw, and, if past history is right, we'll see plenty of incompletions and turnovers.

Another common facet of in the option offense is the assortment of short passes to wide receivers, through screens or passes to the flat. 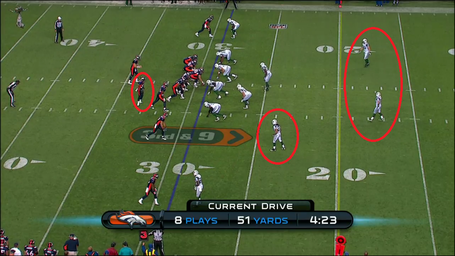 The Broncos receiver circled in red has just motioned over from the far side. He’s going to run out into the flat for an easy reception. This play works because the Jets are giving Tebow’s passing ability way too much respect, even on third and long. There's no need for that, of course, because Tebow won't beat you consistently through the air. 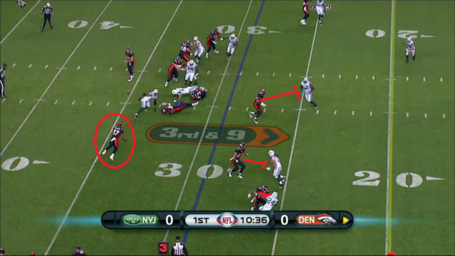 With the ball in the air, you can see how the play has developed. The Bronco receivers identify their man and get into position to block them. 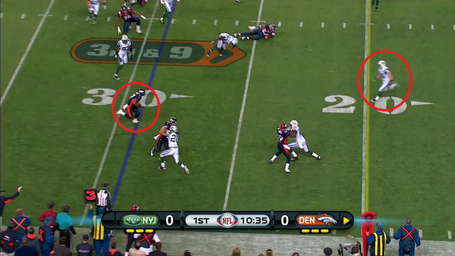 One of the two deep safeties has to come down in order to make the play, as the Jets defensive backs are occupied by blockers. Luckily for the Jets, the safety is able to make the tackle just shy of the first down, forcing the Broncos to fourth down.

But, later, the Jets decide to only have one deep safety. 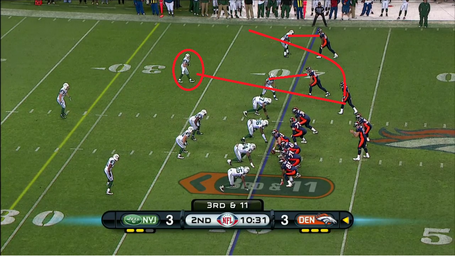 Jim Leonhard rolls down over the top of the receivers, leaving just the one deep safety. Tebow is going to throw this into the flat for Eddie Royal to catch and run. 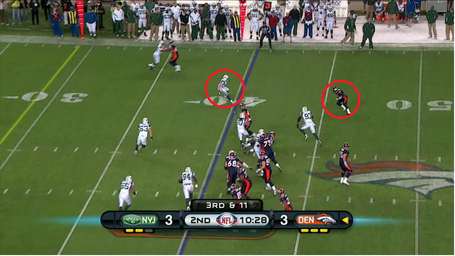 Leonhard reads Tebow and reacts quickly, getting to the line of scrimmage before Royal has fully secured the catch. 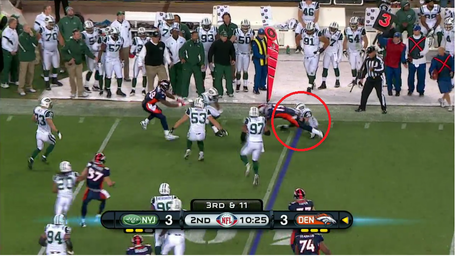 Leonhard shows Royal the sideline, pushing him outside toward it before tackling him for a minimal gain. This is the simplest way to stop the short passing game into the flat or wide receiver screens. I think the best way to defend it is to play man coverage with no cushion, all bump and run. If you can force Tebow to throw downfield, he won’t consistently complete passes.

Here’s an example of why I don’t like defenses giving the Broncos receivers that cushion in this offensive system. This is Tebow’s 39-yard touchdown pass to Eric Decker. 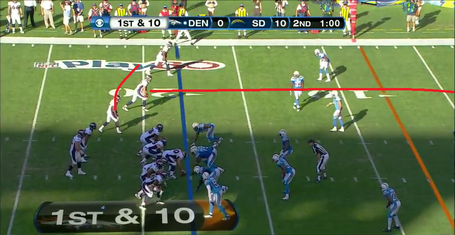 The Broncos are going to run one receiver into the flat like the plays we showed above. But Tebow is actually going to pump fake while Decker runs a go-route deep. The pump fake is aimed to get the defensive backs to bite on the play and land out of position. 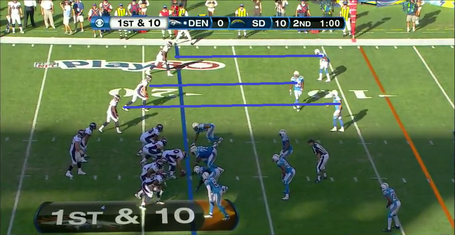 Notice how the defensive backs are all playing with a cushion, trying to read Tebow as he throws. 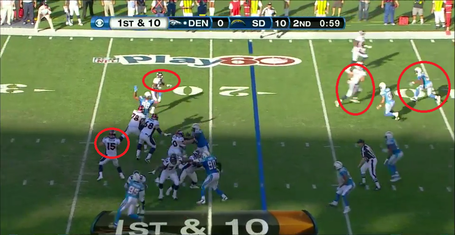 Tebow fakes, and gets not one but two defenders to bite on it. Most importantly, he gets the cornerback covering Decker to bite, allowing Decker to run right past him. If you're running bump and run coverage, that corner isn’t reading Tebow and isn’t biting on the fake. It also gives the corner a chance to disrupt the timing of the play by getting a good initial punch on the receiver. 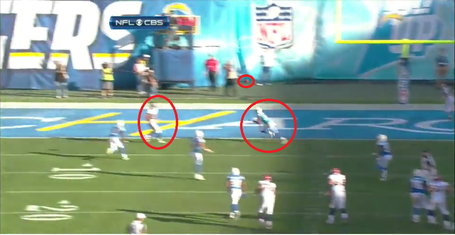 It also really doesn’t help a defense when the safety that is meant to be covering deep sits in the middle of the field and takes an eternity to realize that he should probably be helping over the top of the three receiver side of the field.

So that's a look at a few of the basic plays in Denver's offense. They generally run the same few plays over and over again with tweaks here and there. The key to stopping him seems simple -- make him beat you with the pass -- but the Broncos are 5-1 under Tebow, so it's easier said than done.