From Brad Smith's touchdown tip and catch to Ndamukong Suh's stomp, here's the best and the worst from Week 12 of the 2011 NFL season.

Hurdles, punt returns, rookies blowing up and the tip game. They're all part of the best parts of Week 12 in the NFL. We're also looking at the worst moments of the week and, yes, the Suh Stomp ends up in there as does the lack of bathrooms in Qualcomm Stadium.

One of the Washington Redskins' 50 running backs is Roy Helu and prior to Sunday he hasn't done a lot to be noticed outside of the fantasy football world. On Sunday he changed that when he hurdled Seattle Seahawks cornerback Roy Lewis on his way to the end zone and his first career 100-yard game.

Helu wasn't the only guy to look like an Olympic track and field star on Sunday but we'll get to that later.

In Week 9, Peterson returned a punt for a touchdown against St. Louis, which essentially ended the game.

The lesson is you don't punt the ball to Patrick Peterson because this is what happens:

That was Peterson's fourth punt return for a touchdown, which ties the single-season record held by Devin Hester, Rick Upchurch and Jack Christiansen.

The Bengals and Browns were tied as the final minutes were falling off the clock in the fourth quarter. Instead of playing for overtime, though, rookie quarterback Andy Dalton dropped back and sent a long pass down the field to fellow rookie wide receiver A.J. Green. Green jumped in traffic and caught the pass over Joe Haden and slipped his way down to the two yard line, setting up the Bengals for a game-winning field goal.

There's no video of that of that play but we'll make it up to you -- here's Jerome Simpson with an Oscar-worthy flop.

You saw Helu's hurdle, which was pretty awesome.

LeGarrette Blount may have out done him. 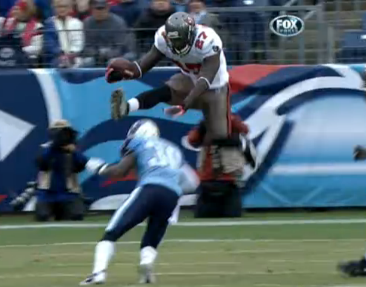 The Bills have been on a downward spiral over the last few weeks losing four in a row and six of their last eight but that doesn't mean that guys like Brad Smith don't deserve to make it on this list, especially when they make plays like this:

The Bears are down to the Raiders by five and they're driving down the field trying to win the game. With eight seconds left in the game, Caleb Hanie rushes his team to the line to snap the ball and spike it in order to stop the clock and prepare for a hail mary. But he thought about throwing it for a second too long and took a couple of steps back before spiking it down. The problem? Waiting that long means it's intentional grounding. Game over.

The penalty calls for a 10-second run off and there were less than 10 seconds left in the game so that ended it.

Chargers kicker Nick Novak had to relieve himself during their overtime loss to the Broncos on Sunday. Unfortunately for him, all the stadium bathrooms were apparently out of order. So, he just did this:

Steve Johnson scored a touchdown against the Jets and decided to mock Jets wide receiver Plaxico Burress, by pretending to shoot himself in the leg, for a touchdown dance.

Of course he was called for a penalty on that. The ball was placed at the 20-yard line, the Jets got great field position and went on to win the game.

At least we know that Steve Johnson can dance.

So he cost his team by celebrating, at least he can make up for it by catching a potential game-winning pa..... nope, he dropped it. 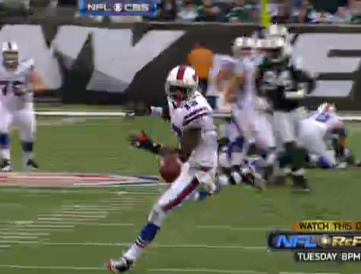 Yeah, that ball hit him in the worst possible place. His chest.

I understand allowing emotion to control you in a game but Ndamukong Suh takes it to a new level again and again. I appreciate a guy who plays with a lot of passion but stomping on people after a play is over is pretty stupid, especially with the refs standing right there (and then acting like you did nothing wrong after the game).

The worst part? He was ejected so his team was out an impact player that can change a game.