Hines Ward suffered what looked to be a head injury, probably a concussion, during the Pittsburgh Steelers game against the Baltimore Ravens on Sunday Night Football. Ward was attempting to make a catch over the middle before Ray Lewis hit him from behind, jarring his helmet as he lost control of the football.

Ward looked like he made the catch on a third-and-seven pass from Ben Roethlisberger, but was hit in the helmet by Lewis and then safety Bernard Pollard seemed to know the football out of his hands to cause the catch to be called incomplete upon review. 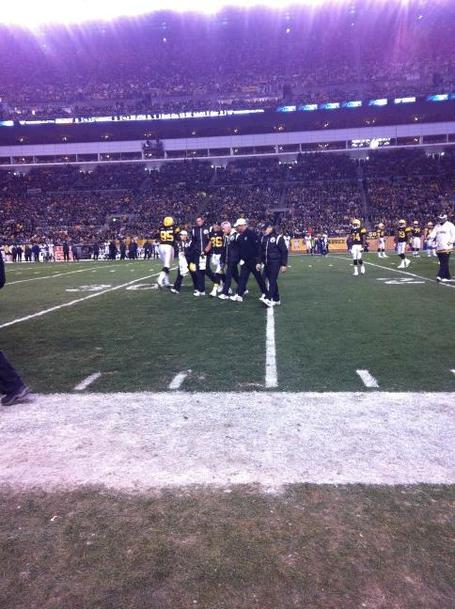 The picture above, uploaded by the Sunday Night Football Twitter account, shows Ward being escorted off the field with the help of the Steelers coaching staff, but the wide receiver certainly didn't look like he would be returning anytime soon. An official update on his status has not yet been reported, but he is on the sideline without his helmet after talking to trainers.

For more on this potentially epic game, check out Baltimore Beatdown for the Ravens' view on things, and head Behind the Steel Curtain for more on the Steelers. For more updates on this game, be sure to stay tuned to the Sunday Night Football StoryStream.