Drew Brees, The Passing Record He's About To Break, And What A Monster Season Looks Like

After 27 years, Dan Marino's single-season passing record finally appears likely to fall. So how is Drew Brees doing it? And how does his season compare to the monster quarterback seasons that have come before?

Share All sharing options for: Drew Brees, The Passing Record He's About To Break, And What A Monster Season Looks Like

In 1984, as a 23-year-old, second-year quarterback, Dan Marino shattered the NFL record for passing yards in a single season by throwing for 5,084 ticks. In the 27 years since, we've witnessed some of the greatest quarterbacks of all time -- Joe Montana, John Elway, Steve Young, Brett Favre, Peyton Manning, Tom Brady. And yet, that record -- as of this moment, anyway -- still stands.

This season, an NFL quarterback finally appears likely to reset the mark. With two of his 16 games left to play, Brees has piled up 4,780 passing yards, and needs only 305 to break the record (he'll probably need only one game to throw for as many). Brees, of course, is no stranger to monster passing stats; on the all-time list of highest single-season passing yardage, his name appears in the top 40 seven times. In fact, he came within 15 yards of the record in 2008.

These are the top five single-season passing marks of all time.

So, what does this sort of monster season really look like? How does Brees' 2011 performance stack up against those of these other dudes? I took a look and made some charts, and before I did, I decided to switch out Brees' 2008 effort with his in-progress 2011 campaign. 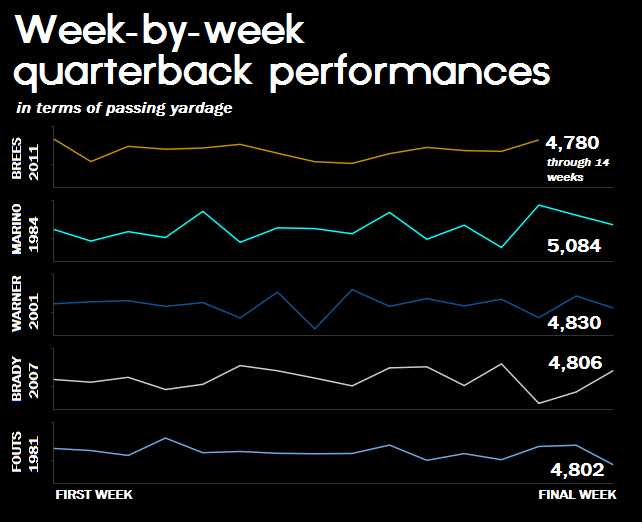 This chart illustrates the week-by-week variance of passing yards during the players and seasons in question. As you can see, Brees and Fouts put up the most consistent passing yardage week after week, while Marino, Warner, and Brady experienced a couple of peaks and valleys.

I find Brady's Weeks 15 and 16 particularly interesting here. Look at that dip. If he had managed to maintain his season passing average over those two contests, he would have busted Marino's mark by over 50 yards. Whether that should have even been a significant priority is another discussion entirely, but it's worth remembering that this is the season in which the Patriots went 16-0 and had clinched the top overall playoff seed eons before these games.

Back to Drew Brees, who has a reputation for distributing the ball unusually equally among his receivers. How impartial is he, and how does he compare in that regard to the other guys at the top? 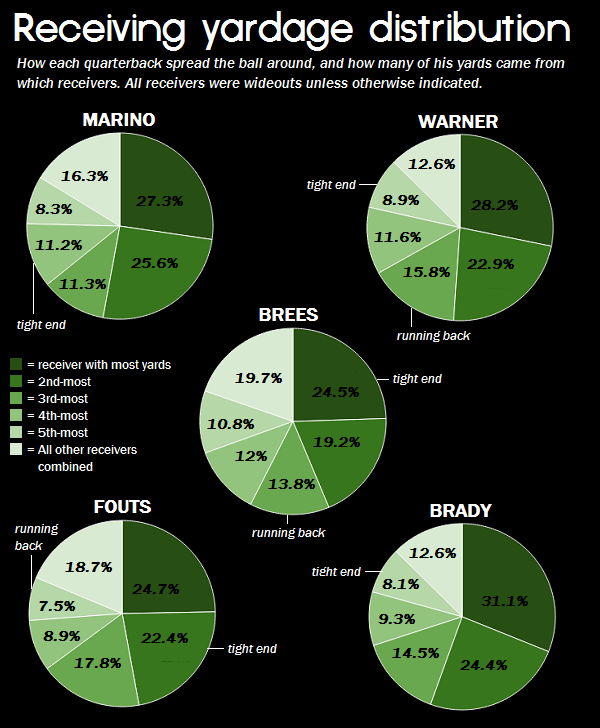 So that's unusual. Brees' relative impartiality may not jump off the chart at us here, but it does bear out that he spreads the ball out a little more than we might expect from such a quarterback.

Next issue: the success of a team's passing game is partially a function of the team's running game. If an offense can't establish the run, its passing game is hampered. Is Brees benefiting from a good running attack? What about those other guys? 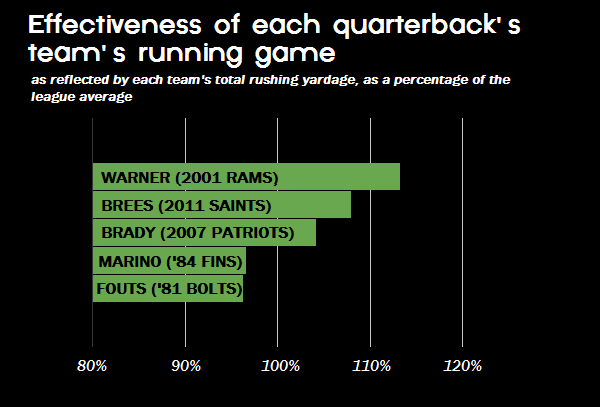 Of the five gentlemen in question, Warner certainly received the most help: thanks in large part to Marshall Faulk, the Rams' offense generated about 13 percent more yardage on the ground than the average 2001 team. The rest of the teams here exhibit deviations that I wouldn't call especially significant, though of course, even an extra 10 rushing yards per game help in their own little way.

A five-item sample size is far too small in order for me to say this with much confidence, but: look at how the three teams from the 21st century had above-average run games, and the two teams from the 1980s produced subpar rushing attacks. Were passing games from back in the day more capable of standing on their own feet?

That's a discussion for another day. For now, let's look at these quarterbacks' defenses. 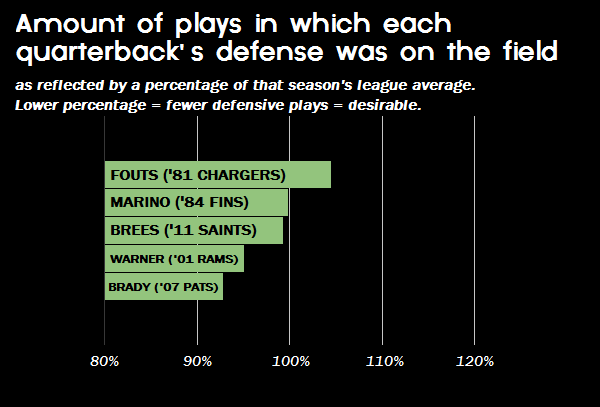 We should look at this graph backwards: smaller is better. The less time a quarterback's defense spends on the field, the more opportunities he has to throw up yardage.

Brady benefits the most here; in that 2007 season, the Patriots surrendered the fourth-fewest points in the NFL. Again, there isn't really a dramatic deviation here, but that in itself insinuates something important, however obvious: if you're going to put up a monster quarterback season like this, your defense needs to be at least half-decent.

Finally, there's a reason why we don't treat raw passing yardage as the sole, or even primary, indicator of a quarterback's overall performance or value. 5,000 yards are nice, sure, but plenty of coaches around the league would trade 5,000 for 3,000 if they could avoid interceptions. How do these fellows look in that respect? 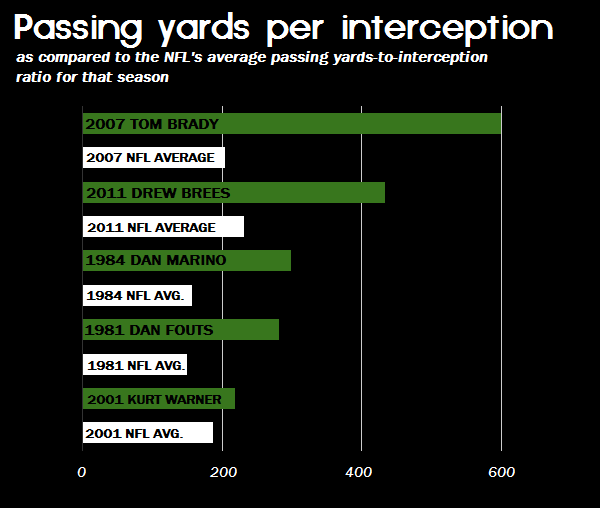 In terms of their passing yards-to-interception ratio, all five of them were better than the league average during their respective seasons. In 2001, Kurt Warner was barely better. This year, Drew Brees is far better.

And in 2007, Tom Brady's yards-to-INT ratio just about tripled the league average. That combination of so many yards and so few turnovers is simply staggering, and Brady's 2007 quarterbacking campaign must certainly rank amongst the very greatest of all time.

This season, Drew Brees threatens not only to break a 27-year-old record. He threatens to shatter it. This season, Brees has set a pace that would put him at 5,462 yards at the end of the regular season, which would surpass Marino's mark by nearly 400 yards.

If and when he sets this mark, Brees will pass Johnny Unitas to sit at 12th on the all-time career yardage list. After that, he would still have over 30,000 yards to go before he passed Brett Favre for the all-time lead. But he's only 31, and at this juncture, we should be hesitant to consider any passing mark out of his reach.