Packers, Steelers, And Other NFL Team Uniforms As Soccer Kits

Share All sharing options for: Packers, Steelers, And Other NFL Team Uniforms As Soccer Kits

These NFL-inspired soccer kits have made their way around the internet in the past week, but it wasn't until today that their creator posted the collection at his own blog. Jimmy Nutini designed un-American football uniforms for 12 NFL teams, including the two Super Bowl XLV opponents.

Each team's top prominently features a local corporate sponsor, as that's how they do it in Soccerland: 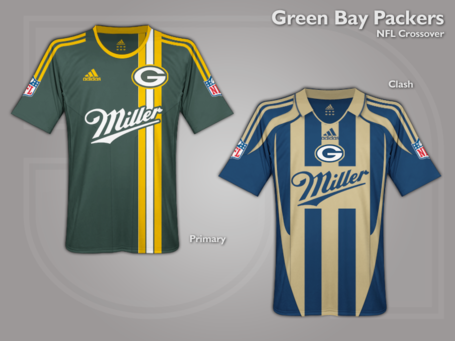 That clash design was inspired by the team's appalling throwback uniforms, which they wore earlier this year. Somehow those colors work much better here. And here's the Pittsburgh Steelers model: 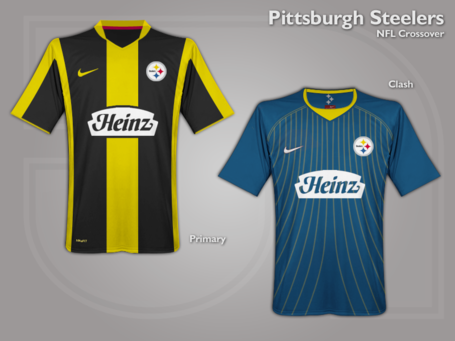 They're all very well-done. The Detroit Lions kit is my personal favorite, the Seattle Seahawks look is appropriately difficult to look at, and the Kansas City Chiefs edition makes me hope one of their coaches takes up Jim Tressel's sweater vest wardrobe soon.

Though as an Atlantan I do have to quibble about the choice of sponsor for the Atlanta Falcons. While Philips' name does grace our basketball stadium, I'm afraid nothing makes its way outside of 285 without getting a Chick-Fil-A logo stamped front and center. Grand Hustle Records, Ted Turner's face, and the SEC Championship Game are also in the running as potential sponsor logo choices.