A potential NFL lockout is a few weeks away but if we're going to stay sane through all this, we'll need someone to take the blame. And for that job, Panthers owner Jerry Richardson has all the credentials we're looking for.

On March 3rd, the NFL's current collective bargaining agreement expires, and professional football will officially begin a work stoppage. The NFL Players Association knows this. Roger Goodell knows this. You know this. The only question is, when it happens, who will we blame?

That's the only way this can be any fun. I mean, there's no way a lockout can ever be fun, but at the very least, we can create some heroes and villains in all this, and make this entertaining.

You know, give ourselves a storyline other than just, "The owners and players are all greedy, and none of them care about depriving us of football. Really, all that matters is the percentage of profits that they get." That'd be terrible and depressing, and I'm not going to stand for it.

And to that point, here's a pretty solid breakdown of what's driving a potential lockout, and it paints a clear picture of who's more blameworthy between the players and owners. One sentence distills things better than anything else: "The owners overspent on unnecessary stadiums, and now they want the players to work more for less pay to help pay down the debt."

So at least until one of them says something phenomenally insensitive, let's say we'll side with the NFL players. Because put it this way: When the television rights to one game each week nets the league close to $2 billion-a-year, it's hard to step back and claim poverty with a straight face.

So let's focus on blaming the owners. Which brings us to Jerry Richardson... 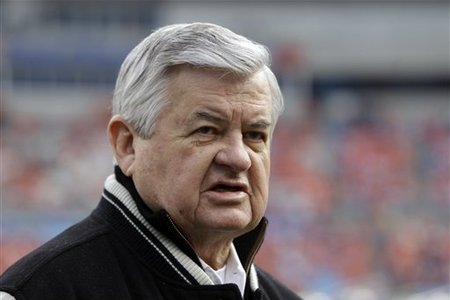 Richardson owns the Carolina Panthers, he's the co-chair of the NFL owners' negotiating team, and I mean... just look at him! He's like a caricature of everyone we've learned to hate from corporate America. Old, rich, and really angry-looking, for some reason.

Of course, he was ranked the league's third most powerful owner by Yahoo! Sports' Michael Silver, who relayed this anecdote from owners meetings a year ago:

... Richardson, the management council’s point man on the labor front, made an even more emphatic statement, opening a session on the first day with a fiery speech that had some of his peers ready to run through a wall. Recalls one witness, "Jerry said, ‘We signed a [expletive] deal last time, and we’re going to stick together and take back our league and [expletive] do something about it.’ He was practically yelling. It was amazing, and it set an incredible tone."

If you're looking to antagonize the players into a lockout and deprive football fans of actual football, it was an incredible tone. See, there's going to be an NFL lockout in the next few weeks. We all know this. But Jerry Richardson wants this. As far back as last March, he's been setting a tone that divides everyone.

Nothing says, "Let's work together" like "We're going to take back our league!"

But hey, at least he's consistent! Just this past week, at more labor meetings between players and owners, Richardson reportedly went after Peyton Manning. From Yahoo! Sports again:

Apparently, Richardson was particularly sarcastic when Manning started to talk about players’ safety. At one point, Richardson evidently said, "What do you know about player safety?"

Wait a second, this guy is downplaying player safety concerns? Get outta town!

As Jay Feely asked incredulously of everyone's favorite billionaire: "Jerry Richardson . . . he’s going to criticize Peyton Manning and Drew Brees and their intelligence in our meeting Saturday? And sit there and say dismissively to Manning  ‘Do I need to help you read a revenue chart son? Do I need to help break that down for you because I don’t know if you know how to read that?’"

Ah, but that's just the point. Jerry's an expert at this, and there's a reason he's the co-chair of the NFL owners' negotiating team. He's got certain virtues that come in handy with disputes like this. Take his complete and utter lack of shame, for instance.

While the league is supposedly in the midst of a revenue crisis, and on the verge of what became a 2-14 season with the league's worst team, Richardson's franchise decided to begin lobbying for a new stadium in Charlotte earlier this season. Which would be fine, except that Charlotte's Bank of America stadium was built in 1996, and because Richardson refused to spend money on the Panthers, the games have been routinely lifeless. And he thinks it's the stadium's fault?

But then... That's why he's our guy. The perfect villain!

He's the NFL tycoon that helped put Roger Goodell in power, and now he's actively galvanizing Goodell and the owners against the players to win back profit shares, while simultaneously asking players to play more and disregard safety concerns. And when he's not talking down to Drew Brees or Peyton Manning about revenue models, he's asking North Carolina taxpayers to bankroll a new stadium.

Finally, one more time from that labor piece mentioned above:

It would be too good to be true if Richardson, the guy lecturing players about profit margins and laughing off health concerns as the game gets bigger and more dangerous... Oh, wow. Of course, the owners' chief-negotiator made his fortune with a string of fast food restaurants. 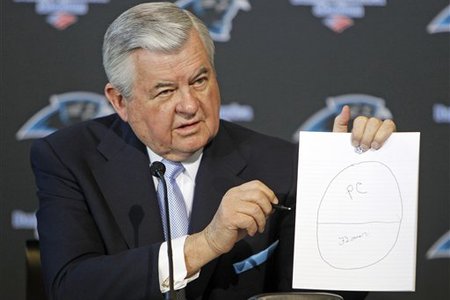 Over the next few months, Jerry Richardson will do his best to explain the NFL's need for wealth redistribution and increased profitability and all sorts of other abstract concepts. Whether it's talking down to someone like Peyton Manning, or talking to fellow owners, who take their pleas to the media. But as we get closer to a work stoppage, it's important to remember.

Nobody embodies the laughable audacity of these arguments better than Jerry, himself. And in the end, that's a good thing. The cartoonish fast food tycoon grilling players about profit margins and player safety? Someone like that makes this whole thing a lot easier to digest.