Did Christina Aguilera Forget The Lyrics During The Super Bowl National Anthem?

Share All sharing options for: Did Christina Aguilera Forget The Lyrics During The Super Bowl National Anthem? 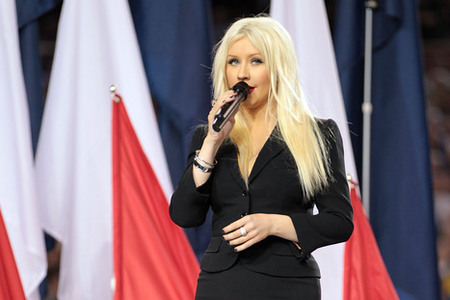 Say this much for Christina Aguilera: if she was trying to make headlines with her National Anthem performance at Super Bowl XLV, it worked. The thing is, they're all good headlines. Or, technically speaking, none of them are good headlines. It all centers on whether she sang the right lyrics. And, um, she definitely did not.

At the 40-second mark, instead of singing, "O'er the ramparts we watched were so gallantly streaming," she sings "What so proudly we watched at the twilight's last..." And then she trails off:

It's an understandable mistake, but good lord... Of all the places to screw up the words, you couldn't pick a worse setting than on National TV with 100 million people watching around the world. This is why the world needs R Kelly.

As for Aguilera's rendition there's also the Las Vegas angle, as oddsmakers still can't agree on whether she met or exceeded the 1:54 over/under they set for the anthem. So, all around, I think it's fair to say that we can all agree this year's anthem was an occasion to forget, and a mistake that we'll rectify by installing R Kelly as the defacto performer at every Super Bowl for the next 20 years.

Why? Because Robert Kelly won't forget the words, he'll IMPROVE the words.