Roger Goodell, NFL Owners, And The Lockout Question Without A Clear Answer

SB Nation was given an exclusive interview with NFL Commisioner Roger Goodell on Thursday, and amidst an honest, open dialogue centered on the NFL's collective bargaining issues, there was one question that never really got a clear answer.

Share All sharing options for: Roger Goodell, NFL Owners, And The Lockout Question Without A Clear Answer

NFL Commissioner Roger Goodell talked to SB Nation in an exclusive interview on Thursday afternoon, when he and the NFL ownership's chief negotiator, Jeff Pash, spoke extensively about the NFL labor situation, the league's continued commitment to the fans, and pretty much everything else you've heard from the league office the past few months.

It's still unclear as to how I lucked into being included on this call, but if nothing else, the conversation we had provided an excellent distraction from decimated NCAA Tournament bracket (thanks, Rick!) and confirmed a lot of what we already know about the NFL.

Namely, that the NFL is very, very good with public relations. And in a labor dispute that's very, very public, that's pretty huge. For instance, just by reaching out to an independent network like SB Nation, it shows the NFL as populists in a war between capitalists. Speaking to a network of fan-centric blogs underscores a commitment to all the crazy people that make the NFL what it is, and it lends some credence to the "fans' first" rhetoric that's been a key talking point for the NFL over the past few months.

'Course, it's also worth noting that the NFL has clear, defined talking points in all this, which should tell us something about the sort of machine we're witnessing. Along those lines, the one question that the NFL didn't answer on Thursday says more than any of the answers they did give. About halfway through our interview, I rambled out a question for Goodell and Pash, and their answer tells the story of the labor debate right now.

(Keep in mind—I'm technically a professional since SB Nation pays me for some reason, but I've interviewed like three people in my entire life, so... Not exactly David Frost over here.)

Q: Looking at the NFL the past few years, and some of the ratings and just the general popularity, I mean, the NFL brand is more ubiquitous than ever before. So how can NFL owners expect fans to believe the model is broken without releasing some more information on the financial side of things? Because from our end, it really looks like the league is doing better than ever. So how can you convey struggles without numbers?

Jeff Pash: Well, there's been a tremendous amount of financial information disclosed to the union in the course of bargaining, and the union knows (pause) as do people like you, who follow the game, that (pause) when stadiums were built in the last couple of decades, they were largely being built with public money. Now they're being built entirely with private money. Or heavily with private money.

So just here in the Meadowlands, for example, the Jets and Giants each have about $650 million of debt to service, plus they've got about $45 million-a-year in operating costs. Plus they have all the cost of upkeep, capital improvement, and things like that. If a stadium gets built out in the Bay Area or out in Minnesota, there are going to be very substantial costs imposed, and the current structure of the collective bargaining agreement doesn't recognize those costs to nearly the extent in order for the investments to be made. It's not a question of popularity, or of revenue, it's a question of having enough of a return, and a proportionate sharing of the financial risk, that the game can continue to grow, and benefit fans and players.

Roger Goodell: I would just add one other thing, to your point, the NFL brand is extremely popular, and you've seen the ratings. All of that is because the owners and players have worked together to try and create not only a business model, but a quality product that everyone can enjoy. And [they] have derived benefits from many different directions, but you don't rest on your laurels, for one, two you have to make sure you're looking toward the future, and not in the past, and seizing opportunities to make sure that you have the right business model for the period of times and the challenges that you're facing.

The league is no different than any other business; our consumers are impacted by what's going on in the economy, we have challenges getting people into the stadium, it's costing more money to build those stadiums, maintain those stadiums, operate those stadiums.

It's costing more money to get the fans into the stadiums, and quite frankly, we're very concerned about what the cost of attending our events is. It cannot continue to escalate at the rates that it has. And we have to be responsible in recognizing that for our fans, we have to create not only a great product, but create value for them. And that's what we're trying to address here. 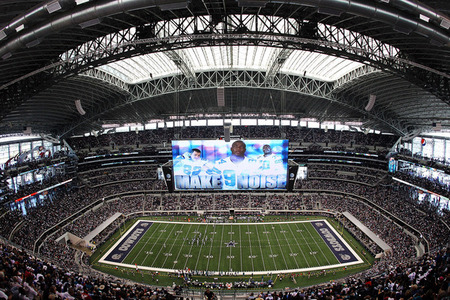 See what they did there? How they answered the question by changing the subject? I mean, Roger Goodell actually managed to turn his answer into an appeal to make NFL games more affordable for fans. Which, again... The NFL is very, very good at public relations.

But while we're here, it's worth noting that neither Goodell nor Pash really answered the question. If teams are hemorrhaging money, then why not release the financial numbers to the public?

There could be no quicker way to make their case in front of fans, and given how committed the NFL is to winning the PR battle on that front, you'd have to think they jump at that sort of opportunity. Since they haven't, you'd have to think... Well, teams aren't really hemorrhaging money.

Forbes has already done fantastic work to suggest as much, concluding that on most every front, the NFL is the healthiest of any professional sport in America. Attendance is down, but the league lost just 139,232 paid tickets this past year, less than 1% overall. Teams like the Giants, Jets, and Cowboys have built expensive new stadiums which creates greater pressure to capitalize on revenue, but they did so with a combined $1.15 billion in expense credits from the NFL. That certainly helps with some of the debts that Pash mentioned above.

And if we're going to talk about the debt and financial risk that comes with NFL ownership, then let's make sure to mention the reward, because there's no pro sports commodity as valuable as an NFL football team. Whereas Major League Baseball has just one franchise worth more than a billion dollars (the Yankees), the NFL has nineteen. And as the league continues to succeed, those values continue to appreciate. Even moreso if teams own the stadiums they play in (they can sell those, too).

Maybe I'm missing something here, but that seems like an important aspect of the business model that the NFL leaves out when Pash says, "It's a question of having enough of a return, and a proportionate sharing of the financial risk, that the game can continue to grow."

Even if the NFL owners break even every single year, their franchises will still get more valuable, and in the long run, owning an NFL team brings a more lucrative return on your investment than anything else in sports. Debts now become profits later, when teams are sold. For instance, Jerry Jones claims he's operating at a loss with his new Cowboys stadium (above), but what's left out of that argument is what will probably be a two billion dollar profit by the time he sells the team.

So looking at all this, and without any financial numbers to sound any alarms of a financial crisis, doesn't it seems like the NFL owners just want more profits? They talk about players having to sacrifice and share the financial risk inherent to owning an NFL team, but it's not like they share the rewards. Then again, maybe billion dollar franchises appreciating by hundreds of millions over time isn't enough to make it worth it for owners. Maybe they see how successful the game has become, and they want big profits annually, as well. That's their prerogative.

But if the owners won't say it themselves, then let's be honest about everyone's motivations as this lockout rolls on and the NFL public relations continues its full court press. As reassuring as it is to hear Goodell talk about controlling ticket prices, telling us that "our fans are certainly at the forefront of our thoughts right now," in the end, it's all about maximizing profits.

And with that in mind, something else Goodell said may be more accurate.

"The league is no different than any other business."