First Roger Goodell, Then De Smith, And Now, A Word From An NFL Player

Share All sharing options for: First Roger Goodell, Then De Smith, And Now, A Word From An NFL Player

After SB Nation interviewed Roger Goodell and the chief negotiator for the NFL Owners, Roger Pash, we had to get the other side of the story from the NFLPA and DeMaurice Smith. And now, in the interest of equal time, it seems like we should probably point you toward this cartoon from Vikings punter Chris Kluwe, and his "letter from the commissioner" below. 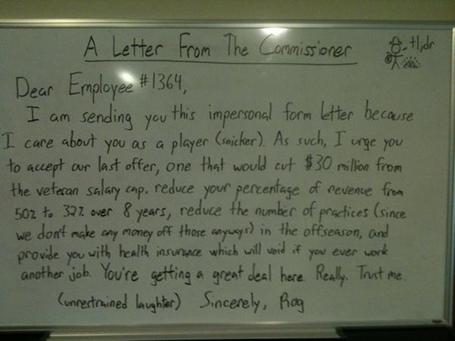 The full text of the "letter" is after the jump.

A Letter From The Commissioner

I am sending you this impersonal form letter because I care about you as a player (snicker). As such, I urge you to accept our last offer, one that would cut $30 million from the veteran salary cap, reduce your percentage of revenue from 50% to 32% over 8 years, reduce the number of practices (since we don't make money off those anyways) in the offseason, and provide you with health insurance which will void if you ever work another job. You're getting a great deal here. Really. Trust me.

...And here's how Kluwe explains the lockout meetings: 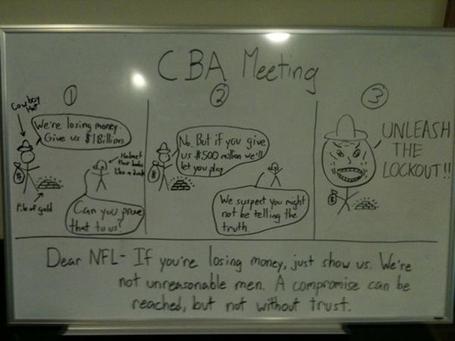 So, yeah. Like I wrote earlier, until the owners prove otherwise, it's hard to sympathize with their cause. And as for the NFL Players? I don't know about the whole group, but Chris Kluwe seems totally awesome.