Does Cam Newton Care About Being Great?

Share All sharing options for: Does Cam Newton Care About Being Great?

When the 2011 NFL Draft arrives Thursday, there's a good chance it'll end with Cam Newton going first overall to the Carolina Panthers.  But are you convinced yet? Do you think Cam Newton has "what it takes"? Some NFL scouts aren't so sure.

"It’s just this gut feeling I have: I don’t know how great he wants to be. He’s got all the tools. Something tells me that he’ll be content to be a multimillionaire who’s pretty good," Mayock said.  "And he doesn’t get it done for me. I think the kid is smart enough. I just don’t know if he cares enough."

So ask yourselves, football fans. How great does Cam Newton want to be?

Does he care enough?

Does he have the intangibles you want in a signal caller?

Will he win over the locker room? 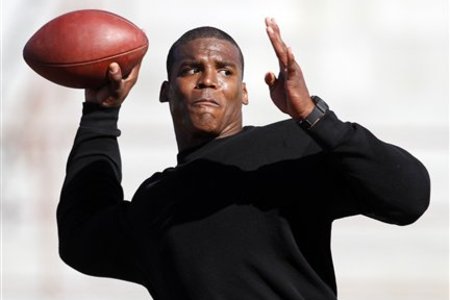 Regardless of where he's drafted, these are the questions that'll follow Cam Newton throughout his first few years in the NFL. Write them down, repeat them over and over. They are textbook examples of the NFL's trademarked Moron Soap Opera. But while we're asking questions... What has Cam Newton done to make the whole world question his commitment?

1. He got kicked out of Florida for stealing and cheating, then went to a community college where he quietly worked his way back onto the map and earned a second chance at Auburn. Once there, he put together one of the best seasons in the last 25 years, recovering from his mistakes at Florida in just about the most spectacular way possible. 2. He probably took money to play college football. This makes him no different than a hundred of NFL players that went on to become NFL superstars. 3. He came out after a pre-draft workout and said he wants to be an Icon.

The red flags are just BLINDING.

Everyone's entitled to their own opinion and it's all guesswork, but hearing the insider-y buzz from the outside, it's important to remember how idiotic this can get. Like, because Cam likes money and enjoys the responsibilities that come with being a superstar, he's a MAJOR RISK.

It reminds me of when various scouts whispered that Myron Rolle wasn't committed enough because he studied at Oxford for a year. "Does he really love football?"

"Nahhhhh, he's probably going to half-ass it his whole career because he can read."

Scouts are the best.

Yeah, just like Rolle had legitimate football question marks, there are plenty of those with Cam, too. Will he be able to transition from an uber-simplified Auburn offense to a pro playbook? Will going number one and signing a gigantic contract force him onto the field too quickly and poison his career? Can he stay healthy? All of those are totally fair.

But "I just don’t know if he cares enough"? I just... I'm pretty sure that's complete bulls**t.