The NFL Lockout Could End Soon With A New CBA And More Football, More Often

The NFL is reportedly getting close to a new collective bargaining deal, and an agreement that would give fans more football than ever. But if the NFL plays on Thursday nights all year round, is that a good thing? Plus: Wife swapping, gay marriage, Mark Cuban, trading LeBron, and a window into the ADD mind. Talking Points is a daily series that highlights some of the best stories in sports (and elsewhere). Read the archives here.

Share All sharing options for: The NFL Lockout Could End Soon With A New CBA And More Football, More Often

The bargaining sessions in the NFL Lockout have continued this week, and for the first time throughout this miserable process, there are actually some signs of hope emerging.

A deal's not done, but sources close to the situation were encouraged by the latest meetings. And considering it was beginning to look like we'd miss at least a month of the NFL season regardless of what happened, a deal this soon sorta seems like a miracle. Maybe the NFL will announce on the 4th of July, just to have everyone feeling extra American and fired up.

Of course, since it's Roger Goodell's NFL, even seemingly good news has to come with an asterisk. As Joel Thorman reported for SB Nation yesterday:

We're not sure on the details but the league could sell the package to another network where they'll be able to add more revenue than if they kept it on NFL Network. It's also possible they sell only a portion of the Thursday night package while NFL Network keeps some of the games.

First of all, I'm definitely sure on the details. There's no way in hell the league would give half of the Thursday Night games to ESPN or NBC or anybody else. Even if nets more money in the short term. The NFL likes those games on NFL Network, and if they're pushing for a full year of Thursday games, that's where they'll be. It's so obnoxious. Thursday Night football's bad enough when it happens half the year.

I'm probably alone on this one, but so be it.

More football always seems like a great idea, but part of what makes the NFL great is routine. Putting football on Thursday nights changes everything. I wrote about it six months ago:

The thing is, there's a rhythm to pro football. We spend the first few days of the work week reliving the previous week's action, then there's a little bit of a lull, and by Thursday and Friday, we're ready to look ahead to the next weekend. ...

When there's a game on Thursday, suddenly people have to start thinking about fantasy lineups even earlier, making bets earlier than they're used to, and—if you're favorite team happens to be playing or it's actually a marquee game—finding a house that gets NFL network. It all catches us off guard ... I get it; the NFL has its own network and wants to make people watch it, so playing games on Thursday makes sense to them. But instead of enjoying the NFL Network, Thursday Night Football kind of just makes me hate the NFL.

Beggars can't be choosers, I know. This is better than 18 games. And if this is the only way that we get football this year, then obviously it's worth it. But it's also textbook arrogance on the NFL's part, and yet another reminder of why Roger Goodell kinda sucks, even when he's apparently doing a good thing (brokering a new CBA). On the bright side, though...

The NFL Network finally fired Matt Millen and Joe Theismann this summer, so it can't get any worse. And the network's considering replacing them with Gus Johnson, so things could get much, much better. If we have to put up with NFL on Thursdays, we might as well ride the Rule of Gus to some instant classics.

Never doubt the Rule of Gus. With that, let's get into a quick edition of Talking Points...

Back When Two Yankee Pitchers Swapped Wives Lives. This will probably be one of the strangest things you'll read all day, but it's pretty fascinating. From New York Magazine:

However, even if no center-field monument will commemorate it, New York’s all-time oddest sports sex scandal came to light during spring training in 1973. That was when two Yankees pitchers, Fritz Peterson and Mike Kekich, 40 percent of the team’s starting rotation, called a press conference to inform mind-boggled newsmen that they had traded families. This included wives, children, and pets.

"Don’t make anything sordid out of this," said the 31-year-old Peterson, a twenty-game winner in 1970 who was then living with Kekich’s wife, Susanne, in Franklin Lakes, New Jersey. The 27-year-old Kekich agreed. "Don’t say this was wife-­swapping, because it wasn’t," Kekich said. "We didn’t swap wives, we swapped lives."

If you're a sports fan, you've probably heard this story before, told like some sort of urban legend about how wild and crazy sports used to be. But they really were wild and crazy, and this really happened. Hearing the players talk about it makes it that much more surreal.

Jean-Ralphio's Greatest Hits. Because it's only been a month or so, and that's already way too long for us to go without mentioning Parks and Recreation. Via Jamie Mottram, here's a few Jean-Ralphio scenes that never made it onto NBC. This one's my favorite:

A Glimpse Of The NBA Media Over The Next 24 Hours. 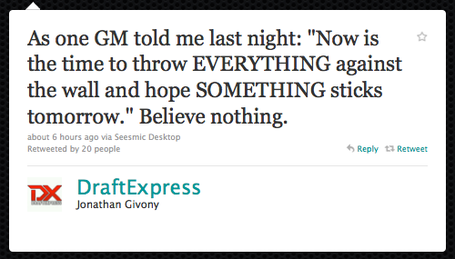 A Notarized "F*** You" From Mark Cuban. Because a title's the ultimate legal trump card.

A Gallery Of The Most Memorable Kisses In Sports. Pretty excellent stuff here.

Did Jeff Van Gundy Just Say The Heat Should Trade LeBron? From the New York Times:

"You know what? If I have a chance to trade LeBron for Dwight Howard, absolutely, I’d do that.

I think you saw in the finals how Miami struggled against tough interior teams. If they traded James for Howard, it would give them the real post threat and with Bosh one of the biggest defensive frontlines. So why wouldn’t you at least take a look at doing that?"

Either Van Gundy truly believes that's a smart play, or he's openly stirring the pot hoping that if enough rumors get started, his brother could turn Dwight Howard (who's leaving anyway) into the most talented player in basketball. I'm going with the second one. Good brother.

A Roundup Of Things Athletes Have Said About Gay Marriage. Not that anyone should really care what athletes have to say about same-sex marriages, but if only for the level of ignorance displayed, this was entertaining. "What's next? Marrying an animal?" [via Jimmy Traina]

The Details From Ryan Dunn's Car Crash Are Horrifying. Ugh.

On A Lighter Note, Zach Galifianakis Is Still The Best. And this slideshow was great. 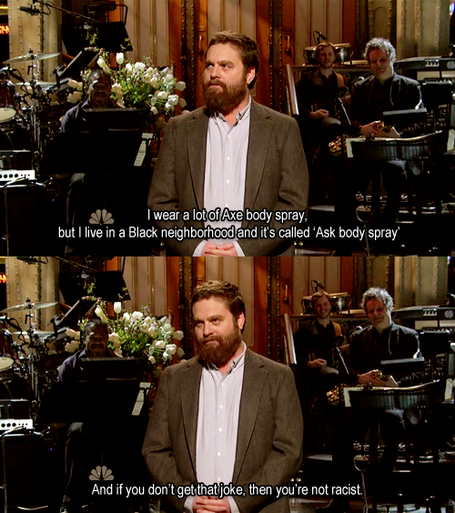 Finally, We End With Les. And this .gif, on repeat everyday until college football starts.