It's unfortunate that Jones was arrested at all, especially considering his sordid past and recent ability to stay out of trouble, but the fact that the Cincinnati Bengals cornerback better known as 'Pacman' appeared wearing a neck brace in his mug shot makes it even worse. 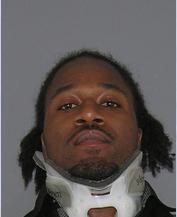 Jones was booked at the Hamilton County Justice Center at 3:11 a.m. on Sunday morning and will be facing charges of disorderly conduct while intoxicated and resisting arrest according to local television station WKRC.

The disordery conduct charge apparently comes from allegations that Jones was "asked repeatedly while inside the bar to calm down and exit, according to court documents obtained by WKRC. The documents also state that he repeatedly shouted profanities and waved his arms violently.

The resisting arrest charges are due to Jones having to be physically restrained by two officers after the football player was unwilling to be handcuffed.

Jones most likely can't be reprimanded by the NFL due to the current lockout, but hopefully whatever caused him to don the neck brace isn't going to be a long-term injury.

Update: Cincinnati.com reports that the neck brace is "due to a football injury." It seems pretty far-fetched that a guy would wear a neck brace to the club, but that's apparently what Pacman did.