Share All sharing options for: Metrodome Roof Finally Repaired After Collapsing In December

The Metrodome roof was re-inflated for the first time Wednesday morning, seven months after it first collapsed prior to a scheduled NFL game between the hometown Minnesota Vikings and visiting New York Giants.

The reason for its collapse was due to the amount of snow sitting on top of the roof, but four months and $22.7 million later, the Metrodome looks as good as new. Well, not quite new, but as good as the roof looked atop the Metrodome before it collapsed, anyway.

The new roof includes criss-crossing rows of hanging panels designed to improve the building's acoustics, according to Vikings assistant director of public affairs Jeff Anderson. Anderson uploaded a picture on Twitter, as well, showing off the Vikings' new digs. 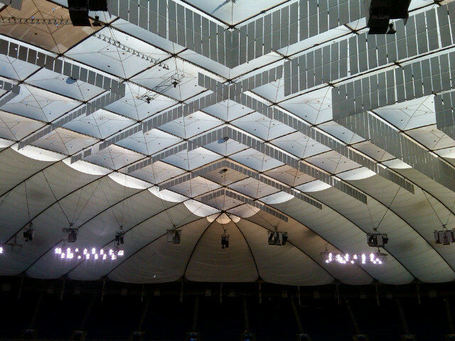 It's unclear what spending $22 million to fix the Vikings current stadium does to its plans of trying to build a new stadium, but at least the team will have a place to play if the NFL lockout ever ends.