The Tony Romo Wedding Video That Sort Of Epitomizes Everything

Share All sharing options for: The Tony Romo Wedding Video That Sort Of Epitomizes Everything

Any lingering bit of respect you might have had for Tony Romo—any shred or smidgeon—will likely disappear once you check out the music video he paid for after his wedding this summer. Funny you should ask, because yes, it does contain a heavy dose of Coldplay. 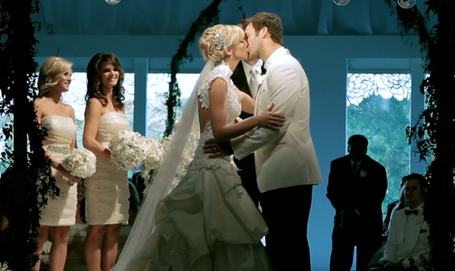 The full video's after the jump.

As a Cowboys fan, I've ridden the Romo roller coaster for a few years now, so I'm pretty experienced with stuff like this. The thing you have understand about Romo is, he does all the same embarrassing things Tom Brady does, except he's not Tom Brady, Super Bowl hero. 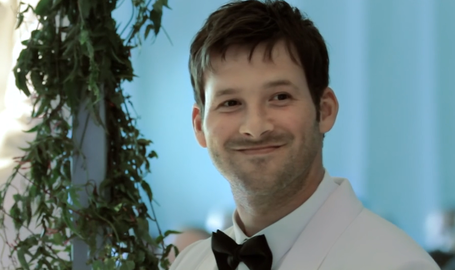 Maybe it was the gratuitous shot of him having his cuff links buttoned by another man--really, dude?--or maybe it was the shots of anonymous people reading about his wedding in the newspaper, but this is the rare snapshot of a celebrity's daily life that makes Tony Romo A) really hard to respect and B) really easy to hate.

The Coldplay song ("Fix You") might as well be about Cowboys fans with Romo.

Either Tony thought this was great idea, himself, or he allowed his wife to talk him into turning their wedding video into a Coldplay video. Not sure which scenario makes him look worse. (It's probably cooler to be a closeted Coldplay fan than letting your wife and/or wedding planner turn your wedding into a Coldplay video.) Regardless, the damage is done.

From here on out, every time he throws a stupid interception, every time he says something ridiculous to the media three days before a crucial game, and every time he cracks under pressure in the playoffs, we'll probably think of this video, and how the writing's been on the wall since the summer of 2011. So... Uhh... Here's to wishing the best for the happy couple!