Chris Kluwe Kicks Back At Critics, Still The Coolest Punter On Earth

Share All sharing options for: Chris Kluwe Kicks Back At Critics, Still The Coolest Punter On Earth

When we last left Vikings punter Chris Kluwe, he'd just called Peyton Manning and Drew Brees "douchebags" for holding up the NFL Lockout by seeking settlements in their pending lawsuit against the league. I think. At this point, I've given up keeping track of the exact details stalling the lockout on any particular day.

But Chris Kluwe definitely called them douchebags, and not everyone liked it.

After the jump, see what former-NFL player Nate Jackson had to say about a punter calling out superstars, and even better, see Kluwe's scathing response. Both sides get some good shots in. Like Jay-Z vs. Nas, but with forgettable white NFL players. STREETS IS TALKIN.

Punters are at the absolute bottom of the totem pole on an NFL roster, the very last man. If the team plane crashed on a deserted island, he'd be dinner as soon as the food ran out. Most of them know this and understand that it's in their best interest to keep quiet.

Punters don't get to call other players douchebags. Again, every other kicker in the league knows this, and keeps it all in perspective. Kluwe's job, juxtaposed with the duties of his teammates, screams douchebaggery. And now Kluwe has compounded his lack of status by exposing himself as a turncoat.

Echoing the media's trite narrative — those selfish players! — is a fool's errand, and couldn't be any stupider for someone who must keep the company of real NFL players, who know what it means to sacrifice. Kluwe's satirical white board drawings and CBA negotiation parodies were harmless enough, I suppose, but even those echoed the sentiment of conventional media wisdom. Player wisdom is beyond him. It is true that greed is the operative byword, but it is not the greed of Manning or Brees or Mankins. It's Kluwe's greedy use of his roster spot as a platform from which to shit into cyberspace, knowing that people will pay attention. Well, now they are.

Like the scene out of 8 Mile, where Eminem calls out Clarence from Cranbrook. Kluwe can't possibly come back fro... Wait, what's that?

Let's be honest here. Yes, I am a punter. Yes, I don't run routes, or zone block, or cover receivers. Apparently, though, neither did you, which is the only explanation for your total lack of statistics.

STOVE ON YA HIP TURN BEEF TO PATTIES.

Speaking of which, my favorite part of your entire rant is the following: "If it is his goal to slide into a post-punter career as a presumptuous and accusatory football analyst, then he has set himself up quite nicely. ..." Let's replace "punter" with "tight end" and see how that reads. Ooooh, it reads quite nicely. I like it. At least I had the grace to do it in 140 characters or less, not this meandering shitstorm that you felt compelled to vomit out at someone you've never met, don't know the first thing about, and likely might enjoy talking to if we ever met at a bar (someone who has written a meandering shitstorm of his own in rebuttal).

So, Nate Jackson, while I respect your right to free speech (as apparently you don't respect mine), I also respect my right to tell you to go jam a tackling dummy up your ass sideways for being a snake-tongued, shit-talking Internet tough guy asshole who is so far out of touch with reality that you have no idea just how privileged we are to play this game for ridiculous amounts of money.

You're not the only one who can craft a sentence, my friend.

Yeah, Jackson got some good shots in, but Chris Kluwe wins this round in a landslide. Not only for responding in the first place and defending his points (which he did quite well elsewhere in the piece), but also for stooping to Nate Jackson's level and beating him at his own game. There's something to be said for taking the high road with things like these, but there's also something to be said for taking the low road, and being f***kin great at it. Rock on, punter. 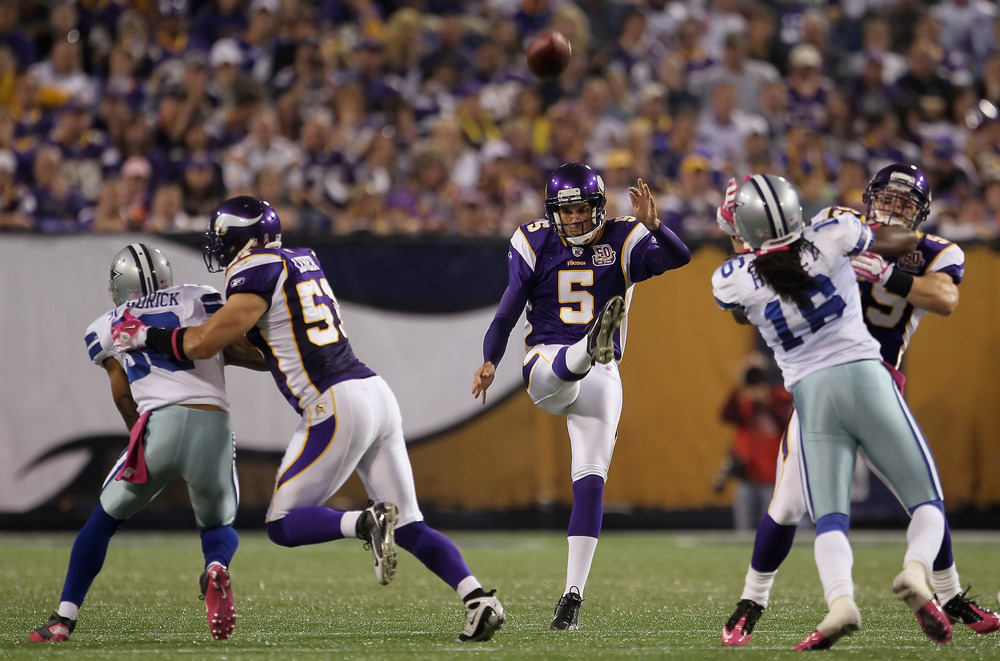 P.S. Ultimately decided not to write the story like this, but God I wanted to.

"Let's be honest here. Yes, I am a punter. Yes, I don't run routes, or zone block, or cover receivers. Apparently, though, neither did you"

OH S**T, BRI-BRI-BRING IT BRING IT BACK

YOU ALREADY KNOW IT'S A DEADSPIN EXCLUSIVE

"Le-le-le-le-let's be honest here. Ye-ye-ye-yes, I am a punter. Yes, I don't run routes, or zone block, or cover receivers. Apparently, though, neither did you, which is the only explanation for your total lack of statistics."

SUIT UP AND LACE YA BOOTS UP, IT'S A BLOG BATTLE.