Considering it's the middle of July and the NFL Lockout is in full swing, Darnell's Dockett's had a busy couple of weeks. In between live-tweeting a run-in with the police and weighing in on the Casey Anthony trial, Dockett found the time to buy himself a new pet. 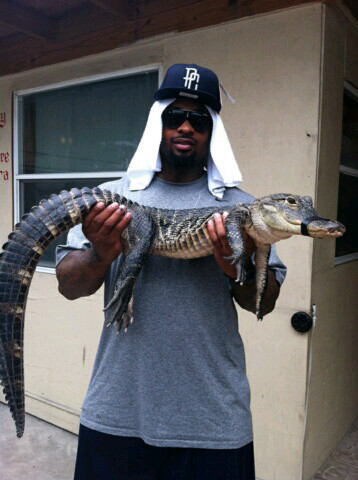 Of course, this isn't the good ol' days when you could just go out and buy an alligator whenever the mood strikes. There's are rules, now (this isn't 'Nam). And damnit, PETA's going to make sure those rules get followed. Check out the e-mail they sent Dockett today.

After hearing reports that Darnell Dockett has purchased a baby American alligator originally from the Florida Everglades, PETA has written to the Arizona Cardinals defensive tackle to let him know that not only is keeping alligators as captive "pets" cruel to the animals and dangerous to humans—it may also be illegal. Florida regulates the keeping of alligators, and it's unlawful to keep an alligator as a pet anywhere in the state of Arizona without a special permit. PETA has offered to help Dockett find a suitable, natural habitat for the alligator.

Sidenote: Does PETA do anything besides send out press releases? Anyway, the e-mail...

People for the Ethical Treatment of Animals (PETA) was alerted this week to media reports indicating that you recently purchased a baby American alligator from the Florida Everglades and that you intend to keep him as a captive pet. Please know that Florida heavily regulates the keeping of alligators and that it's unlawful to keep an alligator as a pet anywhere in the state of Arizona without a special permit. These prohibitive laws and regulations exist because, in addition to posing a threat to public safety, wild animals suffer greatly in captivity.

Alligators in the wild roam freely with members of their own kind, travel long distances, and thrive in the rivers and lakes that they call home. When confined, wild animals will exhibit neurotic and self-destructive behaviors because of extreme boredom, stress, and frustration at being unable to engage in natural behaviors. Keeping an alligator as a pet is simply unfair to the animal. It also poses grave dangers to you and others. By their very nature, these animals are unpredictable and can inflict serious harm. Reptiles are also common carriers of salmonella. You would be held liable for any damage, injuries, or illnesses caused by the alligator.

Respectfully, we ask that you carefully consider this information. Please know that we stand ready to help find a suitable habitat for this animal. May we please hear that you will do the right thing?

All I can say is that whatever happens, this story just further cements Darnell Dockett as the NFL MVP of July. Not only has he pissed off law enforcement and Nancy Grace, but now he's taking on PETA. As for the controversy at hand... Who says this man's not fit to own an alligator?! 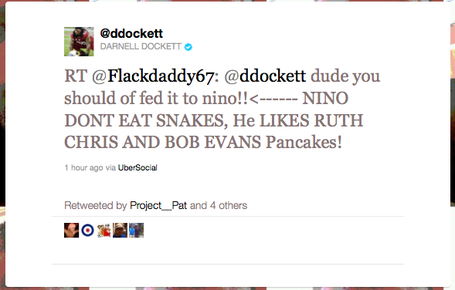