Vernon Gholston Rips Rex Ryan, But There Are Two Sides To This Story

Share All sharing options for: Vernon Gholston Rips Rex Ryan, But There Are Two Sides To This Story

You may have forgotten about former-Jets LB/DE Vernon Gholston over the past few years—it's all been downhill since he went no. 6 overall in 2009, and over the course of three seasons, he's probably most famous for becoming this generation's Mike Mamula. 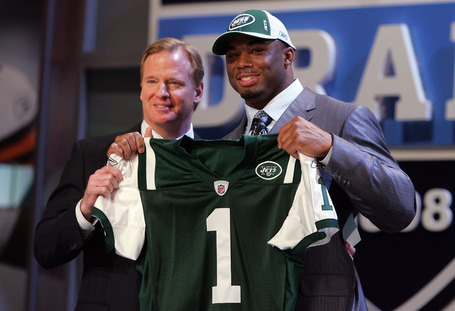 Until this week, that is, when he blamed it all on his coach. From the New York Post:

"I heard how he was perceiving me before the [2008] draft, before he knew me, and I was the same way -- I wasn't hoping for him to be [my] first coach of the Jets when I was there, either. ... Rex made a comment to me when he first came in that he thought I wasn't liked by the guys on the team, then once he got there he saw that wasn't the case," Gholston said. "Those perceptions kind of determine the outcome, and it's sad to say."

"Teams are always looking for talent, and to say I don't have talent is a far stretch," Gholston said. "It's all about getting a fair shot and time in the system. With the Jets, it was constant position change and coaching change. There was no stability. I never really had that with the Jets."

But there are two sides here. It's not as if Gholston didn't get chances. The Jets kept changing his position because they were hoping to maybe, possibly find one position where their first round pick (and $21 million investment) could produce. Instead, he had zero sacks over the course of his 48 games in New York, and by the time the playoffs rolled around last year, he was on the inactive list.

At some point, that's on the player, not his coaches. And as for the personal bias from Rex Ryan, as Yahoo!'s Doug Farrar points out, Rex addressed it specifically in his new book:

It's like how I've been dealing with Vernon Gholston … people were thinking it would be easy for me to get rid of him. Truth be told, I didn't like the kid coming out of college. He's a good athlete and a smart guy, but I thought he was a phony. We had him come to Baltimore, and I just didn't believe in him.  I even told [former Jets coach Eric] Mangini not to draft him. Well, suddenly he was on my team, and I was going to have to work with him. I was not just going to give up on him — that's too easy. I thought, "He's one of my guys now, and I'll be damned if he's going to feel like that. He's going to know that I'm in his corner and I'm trying like hell to get him to play better."

I want him to see everything I'm about, so all those pictures I painted of him in 2008 — you know what I'm going to do? The same thing I did with the paint over the window in my office. I'm taking it down.

Yeah, so... Either Rex Ryan is lying and all of the other Jets players who adore him have been fooled, or the biggest draft bust of the past ten years is trying to blame somebody else for what happened in New York. You decide. (And long live Mike Mamula, obviously.)