It's normal for an NFL field to wear down as the season goes along, but when a field is already in poor shape -- in August, no less -- it can't be an encouraging sign. The Chicago Bears were supposed to practice at Soldier Field on Friday night, but had to cancel their plans because of a field in poor condition. It may be that the field is in the midst of repairs and the grass hasn't taken hold or the field may just be in poor shape after taking a beating in the offseason, but it was deemed unplayable, and the Bears were forced to cancel a family night workout.

Whatever the case, practice is canceled and the field is somewhat of a mess, as noted in these two tweets from Sean Jensen.

It gets worse (also via Jensen):

So #Bears players are already heading back toward Olivet Nazarene University, where they will hold a practice closed to the media & public. People are still filing into Soldier Field and have no idea this has been canceled. They gonna be mad...

Here's what the turf looks like (via Windy City Gridiron) 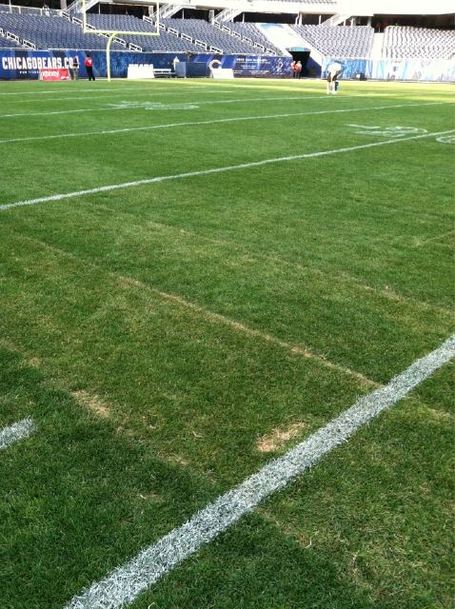 It definitely looks like the strips of sod haven't taken hold and are, instead, dying. Right now, the field looks as though a lawnmower was leaking hydraulic fluid down its sides, causing dead spots and bad track marks. And with the preseason and actual season fast approaching, this surely isn't a good sign, though it is repairable.

This is bad on so many levels. I am at a loss for words. The Bears need every day to practice. The Chicago Park District has completely dissed their number one paying tenant. The Bears are a founding franchise of the $9B dollar NFL and the only team in one of the biggest markets in the country.

Hopefully we don't see a lawn dart incident during an NFL game this year, as we did in Pittsburgh a few years back.