St. Louis Rams wide receiver Danny Amendola dislocated his elbow in yesterday’s 31-13 loss to the Philadelphia Eagles. While not exactly routine, dislocated body parts often make an appearance in the rough and tumble world of the NFL. However, the gory details are usually hidden inside a pile of players. 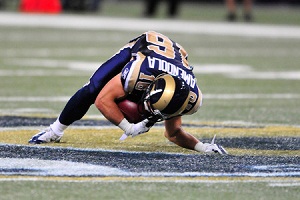 Photographer Jeff Curry of Getty Images captured the gruesome details of Amendola’s injury as it happened. You can feel the Rams’ receiver’s pain in your own elbow when you look at this image.

Amendola described the incident to the St. Louis Post-Dispatch.

I looked for my arm and it wasn’t there. It’s frustrating. I’ll definitely be back as soon as I can.

Oh, your arm is there, Danny, trust us.

Amendola was the Rams’ leading receiver last season with 85 catches. His status for the rest of the season is unknown. He will get an MRI on his elbow today to determine the full extent of the damage, but his season is very likely over.

Danny Amendola Out For The Year With Elbow Injury