Tony Romo Injury: Cowboys QB's Punctured Lung, And Why It Can Be A Dangerous Wound

Tony Romo's injury isn't just a broken rib -- we learned on Monday that the Dallas Cowboys quarterback also has a small puncture in his lung. SB Nation's Medical Expert breaks down Romo's injuries and explains why punctured lungs can be so worrisome.

Share All sharing options for: Tony Romo Injury: Cowboys QB's Punctured Lung, And Why It Can Be A Dangerous Wound

A CT scan of Dallas Cowboys' QB Tony Romo's chest on Monday revealed not only a fractured rib, but also a punctured lung, complicating his prognosis for next Monday night's home opener against the Washington Redskins.

Romo suffered the rib injury on the team's third offensive play from scrimmage in Week 2 after being hit by 49ers linebacker Ahmad Brooks. After receiving pain medications at halftime, Romo missed most of the third quarter, then led the Cowboys to come-from-behind 27-24 overtime win.

In his Monday afternoon press conference, Cowboys Head Coach Jason Garrett stated he believes Romo should be ready for the Redskins game. However, the diagnosis of a punctured lung implies that a small amount of air has escaped from Romo's injured lung into his chest cavity, and if the leak does not close spontaneously, it could lead to a collapsed lung and serious side effects if not treated emergently.

A punctured lung refers to a situation in which the lung is pierced, most commonly due to trauma such as from a fractured rib. An imaging study, such as an x-ray, CT scan, or MRI, will usually show air in the pleural space of the chest, which is located between the wall of the chest cavity and the lung. If the puncture site is small enough, it can spontaneously heal in a matter of hours or days, and any air that has escaped from the lung is absorbed and dissipates in the pleural space.

However, if the puncture site is large, or if it does not heal quickly, air can quickly and continuously leak from the lung into the pleural space, causing lung collapse (known as a pneumothorax). In general terms, a pneumothorax can be described either as a simple pneumothorax or a tension pneumothorax based on its clinical characteristics, and the severity of the condition and its treatment options largely depend upon this distinction.

In a simple pneumothorax, there is usually only partial collapse of a lung. While the collapsed may be severe enough to lead to decreased amounts of oxygen in the blood and cause the patient to feel short of breath, this type of pneumothorax is often small and "stable," and it may not require emergency treatment. However, the pneumothorax may progress to cause worsening breathlessness or cardiovascular impairment, and in either case it would need to be monitored in a hospital setting. 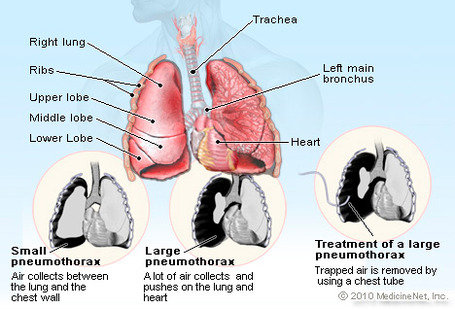 In a tension pneumothorax, air builds up rapidly under pressure and usually causes complete collapse of one or both of the lungs. This causes severe dysfunction of the cardiovascular system, as pressure built up in the lung cavity slows or stops the return of blood to the heart from the veins. Because the heart has less blood available to pump into the main arteries, blood pressure drops, and other vital organs are rapidly affected. In an affected person does not receive emergency treatment, death may result.

By all indications, Romo's puncture is small and stable, so to be clear, it does not appear there is reason to believe he will suffer from any of the worrisome complications of a pneumothorax. Based on Garrett's report one can assume, in fact, that the injury is stable enough not to require any intervention other than giving medications to help alleviate the pain from the fractured rib.

However, if the puncture site does not heal and air continues to build in the pleural space, the pneumothorax would require more aggressive treatment and monitoring. This could include observation in a closely monitored setting with the possibility of giving supplemental oxygen by mask, which can help spontaneously reinflate the lung. If enough air accumulates, another option would be placement of a chest tube into the pleural space, in which a small catheter is placed in the chest and the air removed via suction techniques. The tube stays in place until the suction can be turned off without reaccumulation of air in the pleural space.

Romo will likely have further imaging studies of the chest over the next several days to determine whether there has been significant air accumulation in the plerual space. If the puncture heals spontaneously as expected, Romo's larger concern for next Monday night's game will be dealing with the pain of the rib fracture. However, if he develops a larger pneumothorax over the week, his status for Week 3, and perhaps beyond, will be in serious jeopardy.

The good news for Romo and the Cowboys is that they have an extra day before their Week 3 game on Monday, so hopefully for them it's plenty of time for the lung to heal and Romo's rib pain to become manageable. If not, it's Jon Kitna time once again in Dallas.