Packers-Saints On Thursday Night, And Reason To Preview The 2011 Season

The Green Bay Packers begin their Super Bowl defense against the New Orleans Saints in Green Bay on Thursday night, and what better way to celebrate than with a preview of the NFL in 2011.

Share All sharing options for: Packers-Saints On Thursday Night, And Reason To Preview The 2011 Season

So, in keeping with the theme of rampant disorganization and panicked scrambling that's been gripping teams in the weeks since the lockout ended, let's just dive into the NFL Preview and see what happens. And we might as well start with tonight's Packers-Saints game.

Here's what's terrifying about the Green Bay Packers. Last season they were a budding dynasty derailed by injuries... and then they won the Super Bowl. They lost Ryan Grant, Jermichael Finley, and Nick Barnett, all for the entire season, managed to limp through the regular season and into the playoffs, and then dominated pretty much everyone. It's scary enough looking at the Packers' ridiculous nucleus of young talent, but then you remember: their one year of terrible luck, they won it all anyway.

Really, the Packers offense lost the NFC's answer to Antonio Gates, and proceeded to finish with a top five passing game and Super Bowl rings for everyone. (Related: Did you know that Roger Goodell sent Jermichael Finley a letter telling him to cut down on trash talk? When are they going to make pedantic Roger Goodell memos a part of Madden 2011?)

With Finley back at tight end to trash talk play with dignity and respect while he eviscerates the middle of the defense, Aaron Rodgers should make things look even easier than they did last year, and the combination of Grant and Starks in the running game just makes the offense a little more unstoppable. Especially considering how young everyone in Green Bay is, it all seems a little unfair.

The Saints have a similar story. Here are the New Orleans running backs who got injured last year: Pierre Thomas, Reggie Bush, Lynell Hamilton, Chris Ivory, Ladell Betts, and finally, Julius Jones, who got hurt in the Saints' loss to the Seahawks in the playoffs. But even when they had some of the worst injury luck imaginable, they still won 11 games and made the postseason.

The depleted running game put added pressure on Drew Brees—he passed 658 times in '10 as opposed to 514 times the year they won the Super Bowl—and as you'd probably guess, throwing the ball more often, against defense that knew he'd be throwing, left Brees looking oddly human. Still a great quarterback, but not the superhero we'd seen the year before.

Now he's back and the Saints have a healthy Pierre Thomas to go along with Darren Sproles and rookie Mark Ingram in the running game. In other words, the weakness on a team that won 11 games in 2010 just became a strength. Throw in a revamped defensive line (Shaun Rogers, Aubrayo Franklin, Turk McBride), and the defense should be better, too. You could make a case that the past two Super Bowl champions are better now than they were the year they won it all.

So, yeah: Tonight should be pretty fantastic. It's almost too bad it's coming in Week 1, because I feel like we'd appreciate it more if this game went down, say, eight weeks from now. As it is, we're getting one of the best matchups of the year on opening night, and thanks to President Obama, we won't even have to watch Maroon 5 during the pregame show.

...With that, let's get into the 2011 NFL Preview. Three cheers for ANALYSIS.

The Most Annoying Subplot Of The Year

The NFL's new kickoff rule, but not for the reasons you think. The rule's fine; it's the incessant whining that'll be insufferable all year long. Barring an unforseen calamity that distracts everyone, there's a good chance people will be bitching about the new kickoff rules for at least the next 14 weeks, when everyone will start to focus on the playoff picture instead.

I wrote about the rule change when it happened back in March and Stefan Fatsis echoed my sentiments at Slate this week—the rule change is a microcosm of the problem facing pro football, in general. Everyone wants the game to be safer, but not if it changes the game even a little bit. That includes players, themselves, the men taking years off their lives with this stuff.

But here's the bottom line: Kickoffs are literally two sides full of evolutionary freaks running into each other at full speed and trying to destroy one another. It's mutually assured destruction by design. That's why they're fun to watch, but it's also why kickoffs are completely insane, in general. Anyway, I'm not even asking you to agree with me, but can we all agree to stop talking about this by October?

The Most Fascinating Subplot Of The Year

The two most important jobs in the NFL are quarterback and head coach. They are also the two jobs with the smallest class of truly elite candidates. But you can still sign great head coaches, or just recycle them until you find one worth keeping around. Finding an elite QB is much harder, and mostly a function of luck.

Except when it's not, and there's a can't-miss prospect waiting to be drafted in 2012, and since the NFL Draft has no lottery system, the worst team is guaranteed to get him.

Stanford's Andrew Luck is probably the best QB prospect we've seen since Sam Bradford, and maybe much longer than that. He's not a sure thing, but he's good enough so that it'd be insane not to take on chance on him if you're a bad team that needs a QB.

If you look at things objectively, there are no less than seven teams that should be tanking their ass off to try and luck into the next generation's superstar QB. The Bills, Broncos, Dolphins, 49ers, Raiders, Redskins, and maybe even the Colts if Peyton Manning winds up missing the entire year. You could add the Bengals, Jaguars, Titans, and Vikings, even though they both reached for quarterbacks this year.

I don't know whether NFL front offices are too proud or too insecure to openly tank for a player like Luck, but it makes no sense for teams to grind their way to six wins instead. The Dolphins should be starting Matt Moore. The Bills should be starting Brad Smith. The Redskins should've traded for John Skeleton and Spergeon Wynn this summer. Everybody should be starting Jamarcus Russell.

Can you imagine if this ever happened in the NBA? If there was one position that much more valuable than anything else, no NBA lottery, and a once-in-a-generation talent waiting to leave school? There would be ten different teams with 60 losses.

Anyway, as the season progresses, watching the race for Luck will be as entertaining as any Wild Card race. Especially because it could involve any number of fan bases making death threats to whatever idiot coach wins a Week 17 game that sets his franchise back a decade.

Reminder: The NFL Is A Michael Bay Movie

It's about 70 percent Transformers and 30 percent Pearl Harbor, and every year, the NFL marketing gets a little bit more ridiculous. God only knows what kind of insanity they have planned for 9/11.

Here's why this is all so obnoxious: Despite its outward appearances, pro football's the most strategically intricate sport in history. It's chess between (mostly) brilliant coaches punctuated by explosions from the best athletes on earth. Read Peter King's latest piece in Sports Illustrated, and you see inside a world where strength is irrelevant without innovation and intellect. Players like Ed Reed, Tom Brady, and James Harrison are literally football geniuses, preternaturally gifted with an encyclopedia's worth of football knowledge and instincts. The game has a wider array of unique characters than any sport in the world, characters who have their character tested every single week. And when you really look at the actual game of pro football and what it entails week-to-week, it's indisputably the most awesome sport on earth. So why the f*** do we need FOX robots and the Declaration of Independence to make it look cool?

(Back to the preview)

Three Teams NOT To Watch

The Saddest Team In The NFL

See, the teams above should be awful, but there's nothing worse than heading into a season knowing full well that your team's headed for mediocrity. And the 2011 Minnesota Vikings will be so mediocre. They took their shot at riding a team full of veterans to the Super Bowl the past few years, they failed, only now they can't gut the roster and rebuild because the team's trying to sell Minnesota voters on financing for a new stadium. In other words, rather than be realistic, the Vikings have to be realistic: If they don't make a token attempt at competing, relocation's a serious possibility. So not only do Vikings fans have to root for an aging 7-9 team, but they get to spend the entire season wondering whether the team will move to L.A. in 115 days.

Here's to hoping a deal gets done, because the Vikings belong in Minnesota, and any fanbase that suffers through Favre and McNabb in consecutive years has clearly suffered enough. 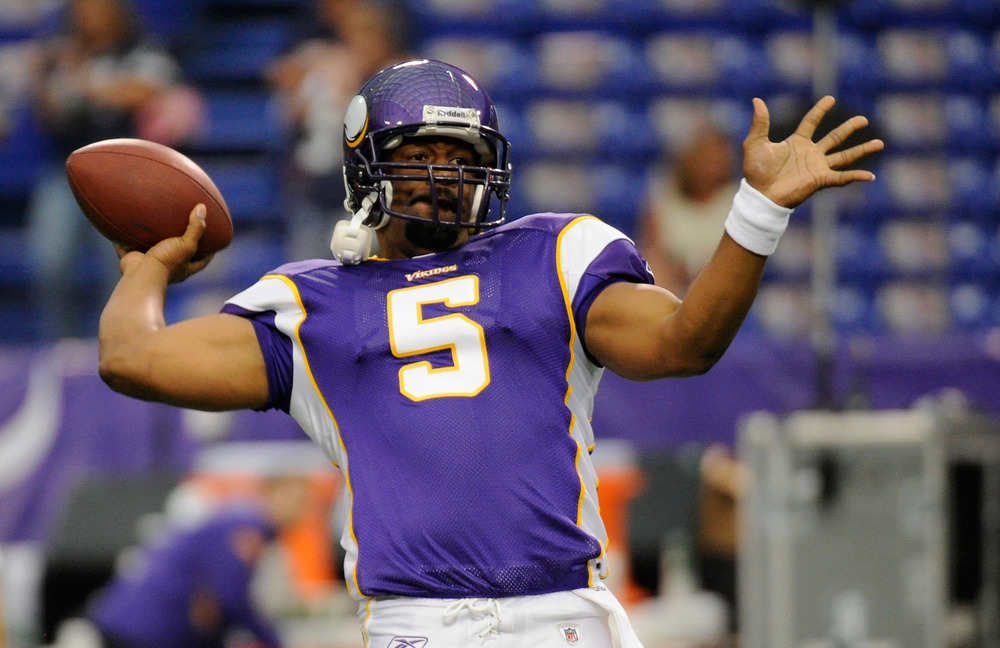 How The 2011 Cowboys Almost Won The Super Bowl

This is a minor point, but you know how the Cowboys looked like the favorites to sign Nnamdi Asomugha until about 15 minutes before he signed in Philadelphia? Well, according to NFL Network's Mike Lombardi on Bill SImmons' podcast last week, here's how that happened.

Nnamdi wanted to play in Dallas, and up until the last minute, Dallas had offered Nnamdi and his agent, Ben Dogra, the most money of any suitor. Simple, right? But Ben Dogra also represents Terrence Newman, the Cowboys corner due to make $8 million this year. Had Dallas signed Nnamdi, they likely would've cut Newman. So at the last minute, Dogra went to the Eagles, explained the situation, and told Philly that Nnamdi was theirs if they outbid the Cowboys (and they did, by $2 million). And that's how Philly became the "Dream Team" and the Cowboys became the "team that could totally surprise everyone if they weren't inexplicably counting on Terrence Newman as their no. 1 corner."

It's not inexplicable, though. They just got screwed. And as a Dallas fan, I hate everything.

Why The 2011 Eagles Won't Win The Super Bowl

The Eagles have three offensive lineman making their first career start this week, a new offensive line coach who's had a month to install a completely new scheme, and an injury prone quarterback who just signed an $86 million contract and has finally completed his triumphant redemption, thereby guaranteeing that something horrible will happen.

I guess it just seems like "Dream Team" could end badly.

So Who Wins The Super Bowl?

I managed to go this entire time without mentioning the New England Patriots and how unbelievably perfect they are at everything, but yeah, it seems like they're due for one more Super Bowl run. The defense is young and fast, and after getting pummeled in the run game in their last two playoff exits, they added 650 pounds of reinforcements (Shaun Ellis, Albert Haynesworth) to keep it from happening again. They'll be great again this year, and unlike the past few years, it should be enough to take them all the way.

But screw it. Wouldn't it be fun if New Orleans won another Super Bowl?