Are there more turnovers in the playoffs? Do teams pass more? Does the home team perform better or worse than in the regular season? Most of these differences are slight, but there are differences.

As we near the divisional round of the NFL playoffs, I've started to wonder whether playoff games trend differently from regular season games. Maybe there's more passing? Are the games closer? Is home-field advantage stronger or weaker?

Well, I dug through the stats, and most of the differences I was able to find are slight. But there are differences.

One major element of a football game's character is its overall pass-to-rush ratio. I added up all passing attempts and rushing attempts, in both the regular season and postseason, since 2002 (the year the present divisional format was introduced), and then broke down the respective ratios: 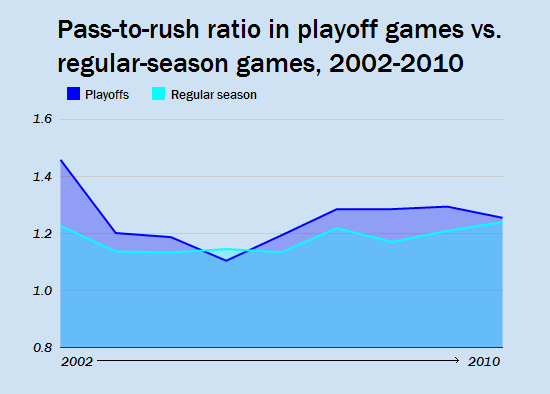 Over the last nine seasons, the pass-to-rush ratio has remained remarkably consistent -- excluding 2002, never below 1.1, and never above 1.3. The ratio has been a little higher in the postseason, but that only represents two or three extra passing attempts per game. So the makeup of the game, in this respect, isn't profoundly different in the playoffs.

NFL playoff games, moreso than playoff games in any other sport, are watched by fans who don't hold a strong rooting interest. Casual Indiana Pacers fans, generally speaking, are not going to be as likely to tune in to a Hawks-Magic playoff series as a Colts fan will be likely to tune in to a Falcons-Giants playoff game. And indeed, over half of football fans across the country will not see their team in the playoffs. What these fans want, then, is an exciting game. And "exciting game" is nearly synonymous with "close game."

The question, then: is a playoff game more likely to be a close game than a regular season game? 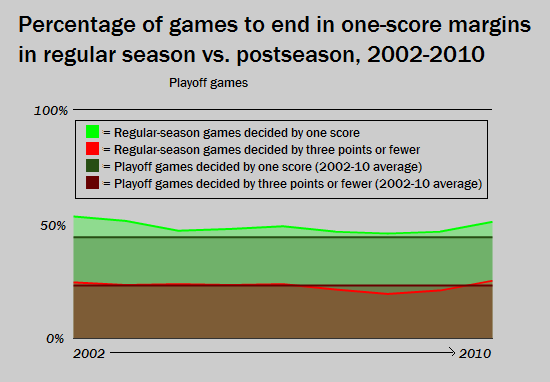 The light green represents the overall percentage of games between 2002 and 2010 to finish with a one-score difference -- in other words, eight points. Year in and year out, that has registered at right around 50 percent. Playoff games since 2002 have registered just slightly lower.

That's notable, because while the regular-season NFL schedule is full of match-ups with any old team, playoff games, by nature, pit teams of relatively similar quality against one another. Sure, Patriots-Broncos doesn't quite seem like an even match-up, but it's a whole lot more even than, say, Patriots-Colts.

One would think, then, that a playoff game would be more likely to be close. That isn't the case. Still, though, the result of a playoff game has roughly 50-50 odds of being in jeopardy until the final minutes. Not too bad.

A game's character is also shaped in large part by its turnovers, or lack thereof. 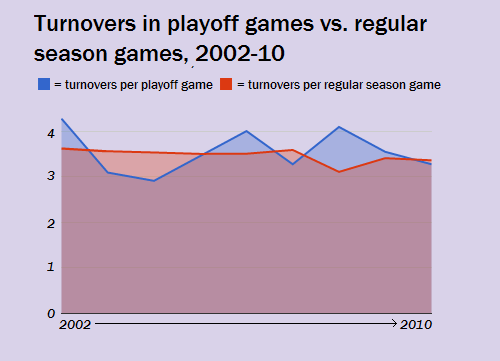 Do turnovers occur more often because the offense makes a mistake, or because the defense is just good at taking the ball away? If anything, this data suggests to me that it's a 50-50 sort of deal. Playoff games have hosted an average of 3.55 turnovers per game, as compared to 3.46 per game in the regular season. Once again, we have a measurable, but not profound, difference.

And lastly, let's take a look at home-field advantage, where a strange trend finally begins to present itself.

The most obvious difference between a road regular-season team and a road playoff game is that, but the very nature of the playoff format, the playoff road team is usually the inferior team. One would think, then, that road winning percentage would drop off significantly in the postseason. 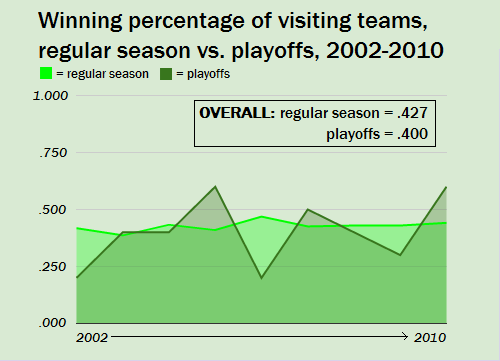 It doesn't, really. A winning percentage dropoff of .027 isn't nearly what I would have expected. In fact, in last season's playoffs, road teams won more often than home teams.

It's pretty wild, really: pit an inferior team against a superior team at a neutral site and you'd probably expect a .400 winning percentage or so. But give the superior team home-field advantage in a raucous playoff atmosphere, and the number doesn't budge from our estimate?

Weird! And it wasn't always weird! 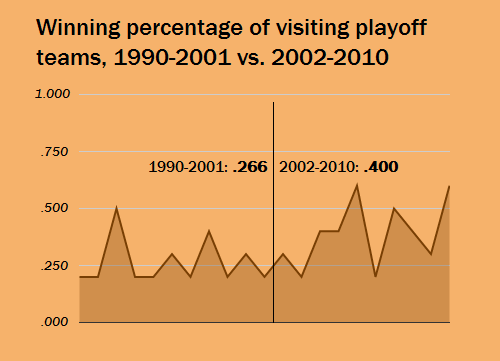 SBNation.com NFL Editor Joel Thorman gave me the excellent suggestion to expand the sample size and see how road playoff teams performed all the way back to 1990, the year the NFL instituted the 12-team format. Before the playoffs were re-seeded in 2002 and the teams were broken up into four divisions per conference, road teams won 26 percent of the time. Since then, they've won 40 percent of the time.

And once again, we have a counter-intuitive result. Prior to 2002, each conference had three divisions. Three playoff berths were awarded to the division champions, and the other three were wild-card slots awarded to the three best non-division-winning teams.

The system we have today is less fair. We only have two wild card slots, as one was taken away to award to a champion of a now-smaller division -- and, in quite a few cases, a pretty sorry division. It's not rare to see teams miss the playoffs and watch a team with an inferior record make it in.

And perhaps that helps to explain the difference we see in the data above. Those division winners get home-field advantage, but they're sometimes inferior to the wild card team. But that can't be the entire story. Maybe someone smarter than I am can figure out the rest of it.

So, to review: in the playoffs, the pass-to-rush ratio is slightly higher, there are just about as many close games, there are slightly more turnovers, and most importantly, the visiting teams perform better than most would expect.

Oh, and the Chiefs, Lions and Bengals will never ever win a playoff game ever again.