It's Okay To Hate Tim Tebow

Tim Tebow and the Denver Broncos head to New England this weekend to take on the Patriots, but before everyone goes crazy all over again, let's explain why it's okay to root against America's new icon.

Share All sharing options for: It's Okay To Hate Tim Tebow

I've never cared that much about Tim Tebow, mostly because he's never been worth caring about. Everyone spends so much time trying to inject meaning into him and turn him into the football player that's about more than just football, but I'd rather just watch sports. If we're going to get all worked up about people who play sports, better to flip out over someone who's actually incredible on the field.

But this week everything changed. He finally won a meaningful game and looked great doing it, and overnight he's gone from a cute sideshow to a full-on icon. Now Tebow's inescapable whether you care about him or not.

There are atrocious theme songs. Historic TV ratings. Lady Gaga dropping F-bombs. The words "Tebowmania", "Teebus", and "Tebowing." The 43 percent of Americans who claim this is all about divine intervention. The Tim Tebow celebrity baby photo gallery. This gigantic USA Today interview. Essays about how Barack Obama could learn a thing or two from Tebow. This autotuned recap of his career.

Then I stumbled across "TebowCenter" on Thursday, where ESPN did an hour-long SportsCenter entirely dedicated to Tim Tebow. It's bad enough that something like that even exists, but then about halfway through I heard Herm Edwards: "If you don't like Tim Tebow," he said, "What you're really saying is, you don't respect people with integrity." This was my breaking point.

People say this stuff all the time when they talk about Tebow. "You may not like him as a player," they chuckle. Then they get serious. "But hey, really, you gotta respect what he's doing as a person."

And why is it alright? Let's go down the list.

1. Because millions of people demand that you love him. Tebow is the Tuesdays with Morrie of sports. Yes, we get it, this is a POWERFUL story with IMPORTANT life lessons in a society too busy to care about what really counts in life. That doesn't mean EVERYONE has to love it.

Come on. If you look up close, the story's really not even that interesting. The writing's mediocre, the themes and "lessons" are predictable, and it's all so over-simplified that it's almost insulting to call this inspiring. Then people are going to tell you that if you don't find this book as powerful as everyone else did, it's YOU with the problem?

2. Because the whole "underdog story" is complete BS. The linchpin to Tebow's myth is that he was never supposed to make it this far. Announcers and commentators talk about him like he's the little engine that could, just powering on thanks a healthy dose of heart and a little bit of faith. And Tebow actively promotes the myth:

He was ranked the no. 1 quarterback prospect in America, and chose between scholarship offers from Alabama and Florida. Another recruiting profile called Tebow "a tremendous all-around athlete that would be being talked about at other positions if it weren't for a big league left arm." Can you believe that guy made it all the way to Division 1 football?

From the 2007 St. Petersburg Times: "He is on magazine covers, award watch lists, posters, T-shirts, Web sites ... and the list goes on. All without starting a game." CINDERELLA STORY, Y'ALL.

From Sports Illustrated's Peter King in 2008: "I believe he'll be a first-round pick, and a high one, because of his multiple tools at the position. He's very smart, he's very big, and when he's had to, I've seen him throw a good deep ball. Yes, I've seen the ducks too. But let me tell you: There are NFL offensive coaches who have raved about him to me. He'll be a quarterback in the big league."

Every step of the way, Tebow's had every opportunity to succeed, his weaknesses have been downplayed, and everyone from Urban Meyer to Sports Illustrated has predicted big things. You literally couldn't script a more conventional resume for a star quarterback. We hate Tim Tebow because we talk about him, and he talks about himself, like he's somehow overcome a hurricane of obstacles to make it this far. The only skepticism he ever faced came when people actually watched him throw a football.

3. Because he really sorta sucks at playing quarterback. It would be one thing if Tebow were just a mediocre QB playing above his head and leading his team to upsets. That's a fun story. Anyone can get on board. T.J. Yates in Houston is one of the coolest subplots in the NFL for that exact reason. But Tebow's not just a subplot; he's literally the only story on SportsCenter. And that's when you can't help but root against him.

Instead of talking about the way Von Miller's helped vault Denver's defense from 32nd in 2010 to 4th 20th in 2011, we focus on Tebow, the guy who led the Broncos to finish 31st in passing this year. He looked AWFUL in the final three weeks of the season and nearly cost the Broncos a playoff spot, but as soon as he has one good game, BOOM! Back to all-Tebow-everything. Next to the rest of the NFL, Tebow is Paris Hilton, Glenn Beck, Snooki, and every other Millennial celebrity that's a thousand times more rich and famous than he should be. Tebow is T.J. Yates, but we act like he's Tom Brady.

4. Because of his religion. Imagine an athlete who didn't believe in God, and during interviews, photoshoots, endzone celebrations, he went out of his way to show everyone that he's an atheist. "I guess I just gotta give all the credit to myself again," he'd say, "We all know God doesn't exist, so I guess today was just another testament to how f***ing great I am." Imagine how completely insufferable that would be. And then to have people say we can't talk about that athlete's atheism?

If you think that his faith and beliefs is just a personal thing for Tebow, grounded in humility, you must have forgotten his anti-abortion commercial that aired during the Super Bowl two years ago. To paraphrase the ad's logic: "Tim Tebow wasn't aborted, and he turned into a superstar, so why should anyone get abortions?" About as sophisticated an argument as the atheist who promises that God can't possibly exist, because otherwise why were there no dinosaurs in the bible?

I've believed in God my whole life, I'm a Christian, and I hate all this grandstanding because all it does is turn faith into a caricature. Tebow makes religion look more desperate and superficial than any atheist ever has.

This is usually okay. When people shout about LeBron James, at least we're talking about the most talented basketball player on earth. But Tim Tebow is the face of the next leap. Where an otherwise irrelevant character makes for good debate, so the news entertainment industry frames his every move as significant, and soon this irrelevant character has been news for long enough that eventually he does do something noteworthy, and he becomes the biggest story in America.

And everyone's yelling about nothing 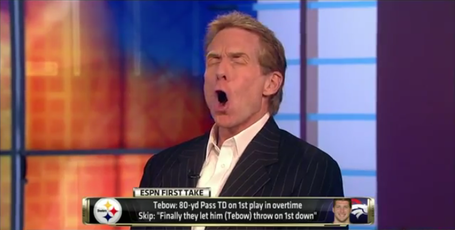 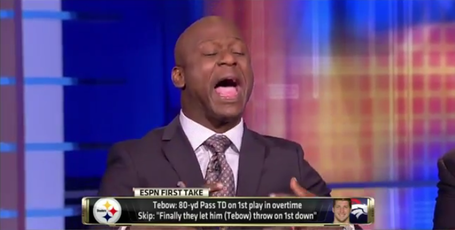 and it goes on forever 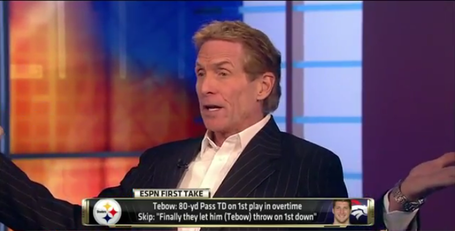 and after a while 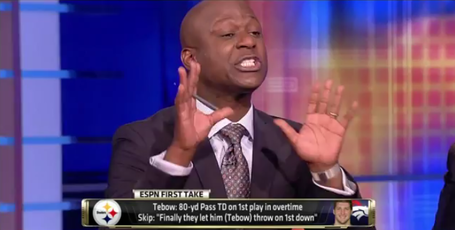 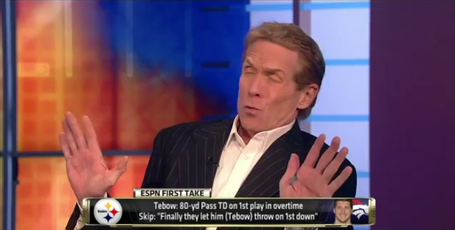 Then you realize... Maybe he's not a good quarterback, maybe he was never really an underdog, and maybe his faith has nothing to do with humility, but we've spent so much time injecting all this meaning into Tim Tebow that this week he finally began to mean something. Only instead of an icon to hard work and humility or a football player that's fun to watch play football, for a week at least, he's the walking, kneeling reminder of just how completely f'ing insane America can be sometimes.

On that note, and with all due respect to Herm Edwards and people with integrity the world over, here's to hoping the Patriots beat the living hell out of Tim Tebow on Sunday.