NFL Playoffs Picks: Doubt Flacco And Eli At Your Own Risk

The stage for the Super Bowl will be set Sunday, and it all comes down to the Patriots and Ravens for the AFC Championship, and the Giants trying to knock off the 49ers out west. Who ya got?

Share All sharing options for: NFL Playoffs Picks: Doubt Flacco And Eli At Your Own Risk

Whoa hey look, it's championship weekend! It's kind of amazing that we've already hit the final four in the NFL's annual NCAA Tournament, but here we are. The Ravens travel to New England to try and take down Tom Brady and the Patriots, the Giants will try to keep their run of upsets going in San Francisco, and when it's all over we'll have a Super Bowl matchup set.

It feels like just yesterday we were awarding the trophy to the Philadelphia Eagles. And then the Packers. And then the Saints. And then Tim Tebow was Super Bowl MVP, for some reason. But now it's finally real, and after months of bad predictions and misplaced hype, the championship games are here. So let's dive in.

Last weekend we went 3-1, bringing the overall playoff record to 6-2--BOW BEFORE THE HALF-DECENT PICKS RECORD. As usual, all picks in bold.

Ravens at Patriots (-7) ... Here's the thing: The Patriots looked phenomenal last weekend and the Ravens looked fairly average. We know this. But people are overreacting for two reasons.

Are people just assuming Joe Flacco's going to completely fall apart? Because here's the thing with Flacco: Maybe he's not an elite quarterback, but he's not Tim Tebow or T.J. Yates. There was a third down play late in the third quarter (1:50 mark) where Flacco had a Texans lineman hanging on him, and he stood strong in the pocket, hung a perfect ball 30 yards down the field on the sideline, and Lee Evans made an incredible catch to bring the ball down to the Houston 9-yard line. Not to go all Cris Collinsworth EXPERT on you, but that's the sort of play that great quarterbacks make.

TRUE: The best quarterbacks make that play all the time, whereas Flacco does it, like, twice. But still: A QB as supposedly terrible as Flacco could never make that throw. It takes too much talent--from accuracy to arm strength to pocket presence--to stand in there and get it done.

The talent that someone like Tebow lacks is there with Joe Flacco, and against a horrible Patriots secondary after a week where everyone's openly talked about him as the weak link, Flacco could surprise some people on Sunday. The Patriots may win, but the Baltimore defense is too good, their offense is too underrated right now, and everyone's forgetting how beatable the Pats have looked in every game where they're not playing Tim Tebow. A 7-point line is too big, especially considering Baltimore's getting pep talks from NAVY SEALS. The Pick: Ravens 24, Patriots 21.

Related: Who Is The Super Bowl Favorite?

Giants at 49ers (-2.5) ... If your team sorta looks like they're having sex on the cover of Sports Illustrated, does that override the SI Jinx, or compound it? 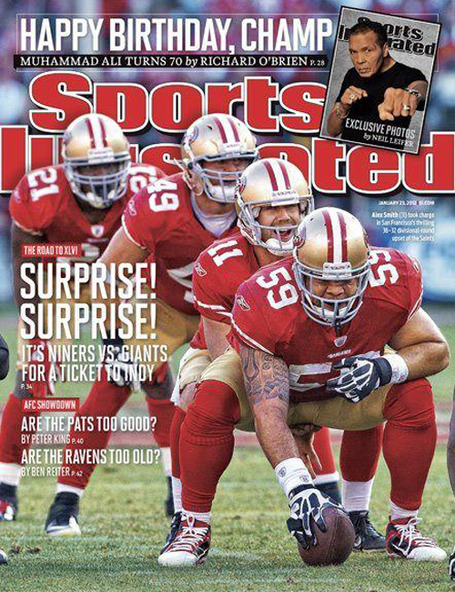 I don't know the answer, but I'm glad we get to ask the question. As for the game, we can say this much for certain: Whatever happens Sunday, what Jim Harbaugh's done in San Francisco has gotta be right up there with the best NFL coaching performances of the past 25 years.

It's not just that he's gone out and helped salvage Alex Smith's career and turned the 49ers into legitimate threats on defense, offense, AND special teams, but the whole culture in San Francisco has changed overnight. The 49ers and the fans in that stadium really believed that comeback against the Saints was going to happen last week. You might say this is the most cliched of cliched columnist nonsense, and you'd probably be right. But all I know is this: A week ago I was excited about betting against the fluke 49ers, and now I'm terrified. Jim Harbaugh is the Jack Bauer of NFL coaches. Doubt his power at your own peril.

On the other hand... Eli Manning is just the greatest. It's impossible to take him seriously, but that's sort of the point. There are a lot of reasons it still feels weird talking about him as a superstar. Because of the way he talks, the goofy throws he makes at least five times each game, the stories of him partying, the little-brother thing, the pathological obsession with pranks... Watching him play like a Hall of Fame quarterback still feels like an elaborate satire. AND IT'S GREAT.

All of which is to say, watching Eli pick apart the NFL reminds me of the girl in this video:

That's Eli Manning. The adorable baby brother who's a completely ridiculous parody of what a dominant quarterback looks like, but who's actually pretty badass when it comes down to it. And it makes no sense, but between Coach Jack Bauer and the eight-year-old girl growling like a hardcore rock star, I think I'm going with Eli to pull off the upset.

Giants Vs. 49ers 2012: Both Teams Healthy Heading Into Sunday