PHOTO: Here's How Close Chip Kelly Came To Being The Next Bucs Coach

Share All sharing options for: PHOTO: Here's How Close Chip Kelly Came To Being The Next Bucs Coach

Your late Sunday drama of the week: the Tampa Bay Buccaneers nearly landing Oregon Ducks head coach Chip Kelly. Ater the jump, the blow-by-blow of what you might've missed, but let's try and sum the whole thing up in a single image. From Register-Guard columnist George Schroeder, a look at the front page headline that almost went out to Eugene and the one that did: 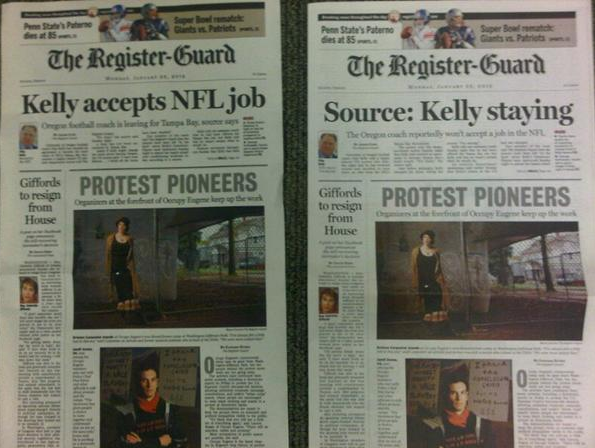 That came just a few hours after a Portland TV station declared Kelly and the Bucs were deep in talks. Within an hour, the report was matched from the other side of the country, as the St. Petersburg Times added detail. The Oregon side was already reporting Boise State's Chris Petersen and TCU's Gary Patterson as likely replacement candidates.

News then came out that Kelly had missed his Sunday night recruiting visits, and very early Monday morning the R-G reported Kelly was gone before reporting an hour later that he'd changed his mind. The Bucs confirmed later on, and that was that.

While speculation held that Kelly was breaking from Oregon just before the NCAA came crashing down, a la Pete Carroll leaving USC for the Seahawks, that's apparently not quite the case. Multiple reports from Sunday night spoke to Kelly's desire to coach in the NFL and escape the college coach's many non-football responsibilities.

For now, though, all of this has Oregon fans beaming a cheery trollface up and down the Pacific coast, not that you can blame them. Bucs fans, meanwhile, are just a little embarrassed.