Kyle Williams, Concussions, And The Nature Of The Beast

Kyle Williams was the 49ers' scapegoat on Monday morning, but a day later, we learn that the Giants had been targeting Williams all game because of his concussion history. Sometimes the NFL is hard to love.

Share All sharing options for: Kyle Williams, Concussions, And The Nature Of The Beast

Kyle Williams has been at the center of the NFL universe for the past 48 hours and for the worst possible reasons. He muffed a punt that set up a Giants touchdown in regulation, then fumbled a return that set up New York's game-winning field goal in overtime. It was a bad day.

"This is the ugly side of sports," everyone intoned Monday. The part that feels cosmically unfair and irrational, where a 23 year-old kid becomes a world-famous pariah because of a split-second mistake. Where it feels perverse to invest this much in sports. Where everyone forgets that the 49ers were 1-13 on third down and probably deserved to lose anyway. Where, instead, we wonder if Kyle Williams will spend the rest of his life trying to forget his mistakes.

It's a familiar refrain. If one team gets to win, the other has to lose. And if one man gets to be the hero, there's usually a scapegoat on the other side. In the NFC Championship game that was Kyle Williams, the second-year receiver that sent sportswriters into overdrive, spinning soliloquies on the crushing blows of failure ...

Kyle Williams was alone on the day he was introduced to the rest of the country. At one point, as he dressed, he noticed a man with a television camera filming him and he gave the man a cold glare. Otherwise, his eyes focused on nothing. He pulled on a White Sox cap and blue-hooded sweater, draped the hood over his head and quickly walked out of the locker room, into a tunnel filled with delirious Giants players, family members and eventually into the parking lot where he blended in with the fans and disappeared.

... After fans had been sent into scatching fits of anger, sending tweets full of hate. 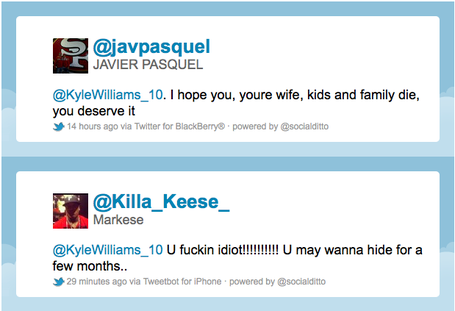 But there's nothing in that story we haven't seen before. We've seen it with Bill Buckner in the '86 World Series, with Nick Anderson in the '96 NBA Finals, Scott Norwood in the '91 Super Bowl, and a hundred other athletes more famous for mistakes than success. The massive backlash, the melodramatic columns... It's all part of the game.

But now there's a twist. As Benjamin Wallace-Wells noticed at New York Magazine, the Giants said they targeted Williams with big hits all game long because of his past concussions. In the rush to wring our hands over what happened to Kyle Williams, we might have missed what really happened.

Devin Thomas, the Giants' special-teamer who recovered Williams' first fumble, told the Newark Star-Ledger, "He’s had a lot of concussions. We were just like, ‘We gotta put a hit on that guy.’ ... [Giants safety Tyler] Sash did a great job hitting him early and he looked kind of dazed when he got up. I feel like that made a difference and he coughed it up."

Jaquian Williams, the Giants cornerback who forced Williams' second fumble, said afterward, "We knew he had four concussions, so that was our biggest thing, was to take him outta the game."

The shock here isn't that the Giants would go out of their way to target someone with a history of concussions. If you think about it, that's a foregone conclusion, isn't it? In a sport where every advantage matters, it's not even a little bit surprising that football coaches would tell their players to exploit any perceived weakness. The shock is that the players were so honest about it.

We're not used to seeing it spelled it out quite so literally. "We knew he had four concussions ... so our biggest thing was to take him out of the game." This is football. And were it not for Wallace-Wells at New York Magazine, we probably would have been too busy to even notice.

Which isn't to say plenty of people don't realize how mundane this story is within the NFL. For instance, the 49ers may have been victims of hard hits this week, but think back to the week before.

On the Saints' opening drive, they approached the goal line when Niners safety Donte Whitner obliterated Pierre Thomas with a perfectly legal helmet-to-helmet hit, Thomas dropped the ball, and the 49ers saved a touchdown. The announcers went nuts praising Whitner's hit, but never mentioned that Thomas was obviously knocked out cold in the middle of the play. The omission -- while Tony Siragusa and "Moose" Johnston gushed over Whitner -- was like a creepy parody of the NFL's oblivious attitude toward head injuries.

Watch Thomas' body go limp, and try to talk about anything else afterward.

Maybe Whitner wasn't trying to concuss Thomas, but if you asked him whether the concussion was worth it to get the ball and save a touchdown, he'd definitely say yes, right? This is the problem with football; there's enough money and fame on the line so that it's always going to be worth it, even to the players being concussed.

Pierre Thomas never returned that day; the Niners won a thriller at the last second in what was easily the best game of the playoffs so far. And if you can just ignore the first part of that sentence and focus on the second, then loving football is easy.

But that's the challenge these days. In 2012, football's so insanely ubiquitous that it's impossible to look past basic realities of the game that we would've ignored even 10 years ago.

In other words: As football becomes more popular than ever, it's also become harder and harder to love football. We know too much about what's at stake, we see every angle, and we hear every reaction. So as 70 million people watch, it's hard to watch without feeling a little queasy.

One thing's for certain: The Giants targeting Kyle Williams because of past concussions isn't a surprise. Even if you assume that the Giants players were following orders from the coaching staff, it's not groundbreaking to hear that NFL teams go after injured players as a rule.

But now that we hear the Giants say Williams "looked kind of dazed" early on and they were targeting him all game, we're not really talking at the tragedy of sports, but a sport. Kyle Williams is not Bill Buckner, Nick Anderson, or a kicker who choked. He's a football player.

48 hours past Sunday, what happened to him still feels cosmically unfair, only now when we talk about perversions, we can't help but think about football in general, and how much more dangerous it'll get before it ever gets safer. When we hear Kyle Williams may have been concussed during his worst day as a football player, we don't wonder whether he can forget his mistakes, but whether he even remembers them. And with pro football in the 21st century, it's all part of the game. 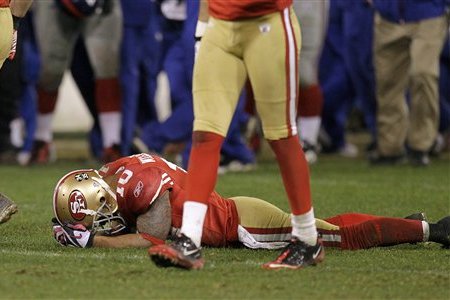