Peyton Manning And The Worst Goodbye Party Ever

While the NFL world descends on Indianapolis for the Super Bowl, Peyton Manning looks like he's on the way out. If this is how it ends for Manning, Jim Irsay, and the Colts, the lesson is hard to ignore.

Share All sharing options for: Peyton Manning And The Worst Goodbye Party Ever

If Peyton Manning isn't the greatest quarterback of all time, he's one of only three or four guys in the conversation, and that speaks volumes. We know this. He's an 11-time Pro Bowler with an NFL-record four MVPs -- there's no drama about how he'll be remembered. If anything we've taken it all for granted.

Which brings us to this week, where Indianapolis is getting ready to host Tom Brady and Peyton's little brother on the biggest stage in sports, while Peyton Manning's career quietly fades away in the background. On Tuesday, an article ran in the Indianapolis Star in which Peyton talked about watching some his close professional friends get fired.

"I guess it's the reality of the football world," he told Bob Kravitz. "Just not something I've had to deal with very often. This is so ... sudden. Their keys didn't work the next day. There's no other way to do it? I don’t know. That's hard to see, all these people leaving. And I may be behind them. Who knows?" This a new Peyton Manning: Frustrated, uncertain, vulnerable.

It's no small twist.

If there's any indelible image of Peyton Manning as a player, it's not him hoisting a Super Bowl trophy, or collecting MVP awards, or even throwing touchdowns to Marvin Harrison. 30 years from now, I'll still remember that obnoxious routine he had before every play, where he'd audible and audible and audible, and then audible just one more time.

This became such a trademark of Peyton's NFL identity that even in video games, if you played the Colts, you'd have to wait till the end of every play clock, because Video Peyton was just as OCD as the real thing. It was awful. In Madden or real life, we always wondered: "Can't he just knock it off and snap the ball? How much could he possibly change at the line every time? This has gotta be 90 percent bulls**t, right?" The answer to that last one is sorta.

Peyton's audibles may have been a bunch of gibberish, and even when they weren't, it's true: Pointing out blitzes and shouting out hot routes and flipping protection schemes only goes so far before an NFL play.

Any play still comes down to a series of individual battles, any one of which can decide the outcome for better or worse. A blocker gets beat, it's a sack. A receiver breaks free, it's a touchdown. More often than not, everyone on both sides does their job, and it's basically a draw. Audibles can optimize matchups, but it only goes so far. This is chaos we're talking about.

Which isn't to say Manning's compulsive adjustments were worthless. If most pro football plays are basically a draw, every advantage counts. So, even when the trillions of checkdowns accomplished nothing in controlling what happened after the snap, it gave Manning the illusion of control.

For more than a decade, this kept NFL defenses on their heels. As one old teammate told USA Today in 2006, "If you were to go around the league and ask, 'What exactly is Peyton doing at the line and how much does he really control?' the football people wouldn't have a clue." Manning was known to keep 40 pages of notes for each game, and when he wasn't studying, he kept all those notes locked in a safe.

It helps to have gambled against Peyton Manning to understand the impact of all this. Maybe he's not the greatest ever, but there's definitely never been a scarier quarterback to bet against. Sure, all the gesticulating and audibles makes you say, "This has gotta be 90 percent bulls**t, right?" But then you always had to pause. And quietly wonder whether it's not. Maybe he just spotted a blitz, audibled to a guaranteed touchdown, and now he's just sitting at the line, biding his time before shredding another defense. Manning did that often enough to keep us all guessing. 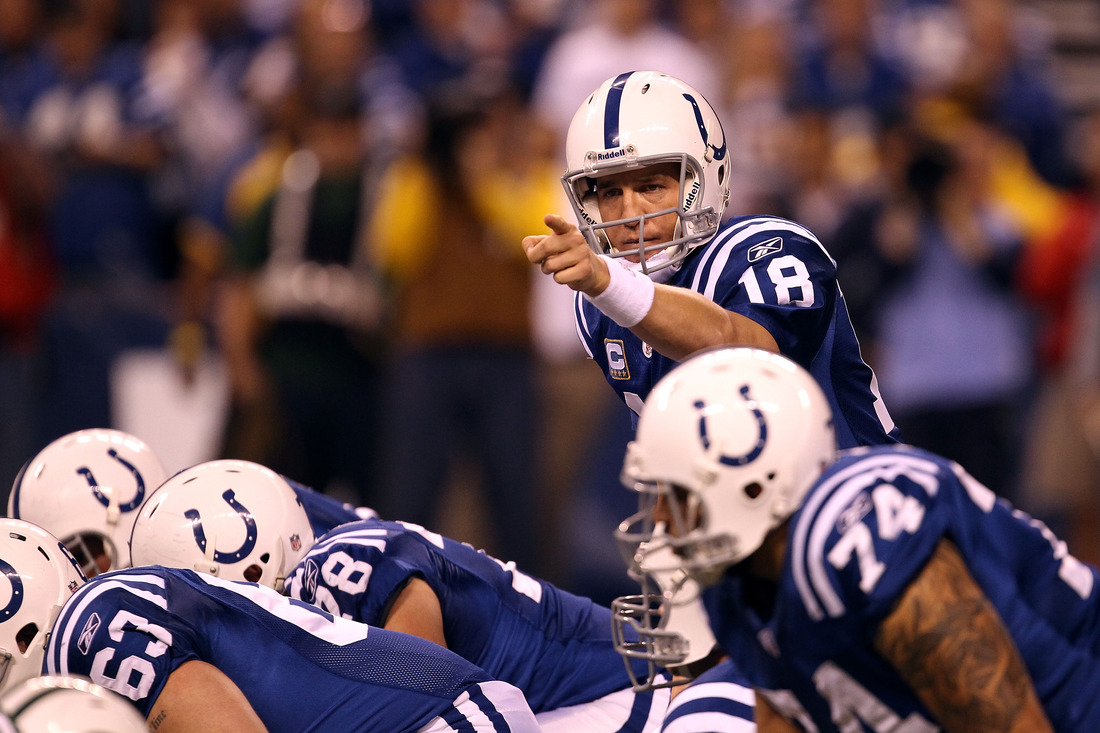 "We just don't know, and nobody can tell you." This is Bill Polian now, the GM that's been with Manning throughout his time in the NFL, and another friend of Peyton's who was fired this month.

"It's an ongoing process," Polian added.

An ongoing process that could end sooner than later. After Peyton's comments earlier this week, Colts owner Jim Irsay snapped back, calling Manning a "politician" and even questioning his loyalty. "The horseshoe always comes first," he said. "You keep it in the family. If you've got a problem, talk to each other. It's not about campaigning or anything like that."

And then Manning responded. "At this point," he told the Indianapolis Star, "Mr. Irsay and I owe it to each other and to the fans of the organization to handle this appropriately and professionally." If this is the end, he wants to take the high road here. "When the time is right for Mr. Irsay and I to sit down, I look forward to a healthy conversation about my future."

High road or not, though: Hearing Irsay snap at Manning is both a reminder that patience is wearing thin in Indianapolis, and that in the end, Irsay's the one with all the power. Crossing Peyton no longer risks paralyzing the franchise. The "conversation about his future" will be more one-sided than any NFL conversation of Peyton Manning's career.

For the first time in his football life, Manning has no control. Nobody knows whether Manning's nerve will regenerate in time to play football again, everybody knows the Colts are ready to move on and draft Andrew Luck, and that leaves Peyton stuck in no-man's land.

If the Colts cut him, and they should, Manning could still play elsewhere, but why would he? If you were Manning, with a debilitating neck injury that may or may not get better, would you really want to waste your time twisting in the wind, hoping for the chance to maybe finish out the last few years of your career on a team like the Redskins? Retirement's the only option that makes sense.

A year ago this weekend, Peyton Manning was in Hawaii playing in the Pro Bowl. A year later, he's had his career snatched away out of nowhere, his team's ready to move on without him, and it all plays out this week and next, when his franchise plays host to his archrival and his little brother, as America debates whether they've passed him by. It still feels surreal. For someone as competitive as Peyton Manning, next week has to be the cruelest goodbye party of all time.

Suddenly even his pre-snap OCD seems endearing. We'll miss him when he's gone. Don't get me wrong: Nobody should feel sorry for Manning here. His life has been stupidly surreal in the best of ways until this year, and with endless millions, family, and an unimpeachable reputation, he'll be fine. There will plenty of time to decide how he measures up to the greatest in history, and what he meant on the field. If this is the end, we'll still be talking about Manning for decades.

But if these next few weeks are the end of Peyton Manning, the way it's happened is hard to ignore. Millions of hours of film study weren't enough to stop this. Neither was the psychotic work ethic, the superhuman gifts, or the legend that's defined him for a decade. He could scare the NFL with gibberish, but he can't say a thing to change what comes next.

If even Peyton Manning--the football superhero who spent his career looking like he controlled the game better than anyone in history--goes out completely helpless, that says something about the way football works, doesn't it? Even the most convincing illusion is still an illusion.