NFL Playoffs: Wild Card Weekend Rankings For Damn Near Everything

The NFL Playoffs are upon us, and if history's any indication, we have no idea what's coming next. But that doesn't mean we can't have fun preparing. Get ready for the weekend with some Wild Card power rankings!

Share All sharing options for: NFL Playoffs: Wild Card Weekend Rankings For Damn Near Everything

It's been 17 weeks, and the NFL season has finally come to an end. Now? PLAYOFFS. The place where pretty much anything can happen. And the place where "pretty much anything" will happen. Because if you think the regular season is full of parity that leaves you dazed and confused roughly 45 percent of the time, then the playoffs take that number and kick it up to 65 or 70.

Remember what happened LAST Wild Card weekend? When the Jets beat the Colts thanks to Jim Caldwell's atrocious game management, the Seahawks upset the Saints thanks to Marshawn Lynch turning into the incredible hulk, and the sixth-seeded Packers took down the Eagles in Philly? The NFL's high-powered Parity Machine is just playing games during the regular season. The playoffs is when the machine goes nuclear and knocks us all on our ass.

So in the spirit of attempting to make sense of what's about to happen--or, for the sake of going on record with what we know going in--let's rundown the power players for this weekend's games. Top to bottom--players, coaches, broadcasters, teams, etc--these are your Wild Card Weekend Power Rankings. And we begin in Denver...

301. Denver Broncos -- Tim Tebow and the Broncos may not be the worst NFL playoff team we've ever seen, but it's never a good sign when you ask, "Are they the worst ever?" and you have to stop and think for a second.

256. Marvin Lewis -- He and the L.A. Clippers are living proof that if you stick around long enough in anything, just by the laws of statistics, at some point you'll stumble into success. Marvin Lewis is the NFL's blind squirrel.

132. The Lions defense -- The Lions secondary was actually supposed to be a much bigger weakness than they turned out to be this year. They finished 22nd in pass defense, 5th in interceptions, and actually put together a pretty decent year. 'Course, if you watched them get torn apart by Matt Flynn in Week 17, you begin to understand where everyone was coming from in the first place.

131. The Saints defense -- Basically what we're saying is, there's going to be a lot of points scored in this weekend's Lions-Saints game. And that's not even a little bit of criticism. Did you see the Rose Bowl and the Fiesta Bowl? You guys... THE WORLD'S MORE FUN WITHOUT DEFENSE.

113. T.J. Yates, Andy Dalton -- These are two of your NFL playoff quarterbacks.

These are two of your NFL playoff quarterbacks?

These are two of your NFL playoff quarterbacks!

111. Enjoyable Bad Movies -- If you adjust your expectations beforehand and accept that you're not going to be getting a classic that makes you think, or even a clever story that keeps you on the edge of your seat, there are ways to enjoy otherwise terrible movies. If you expect the worst and just accept it, then even the bare minimum of competence and entertainment becomes a pleasant surprise. This is how I wound up kinda-sorta loving that A-Team movie with Liam Neeson when I saw it on a plane a few weeks ago. This is the Bengals-Texans game, too.

99. James Harrison -- Speaking of The A-Team... When he's done with football--which could happen sooner than you think, thanks to Roger Goodell's PR hit squad--James Harrison could/should go into acting. If Kimbo Slice Rampage Jackson can do it, you gotta believe Harrison can play a bloodthirsty mercenary who finds Islam in prison, becomes a pacifist, then agrees to forsake his newfound beliefs just this once, because the C.I.A. tried to kill him and Liam Neeson.

97. Cincinnati Bengals -- A.J. Green will have his day, it just won't be this weekend. 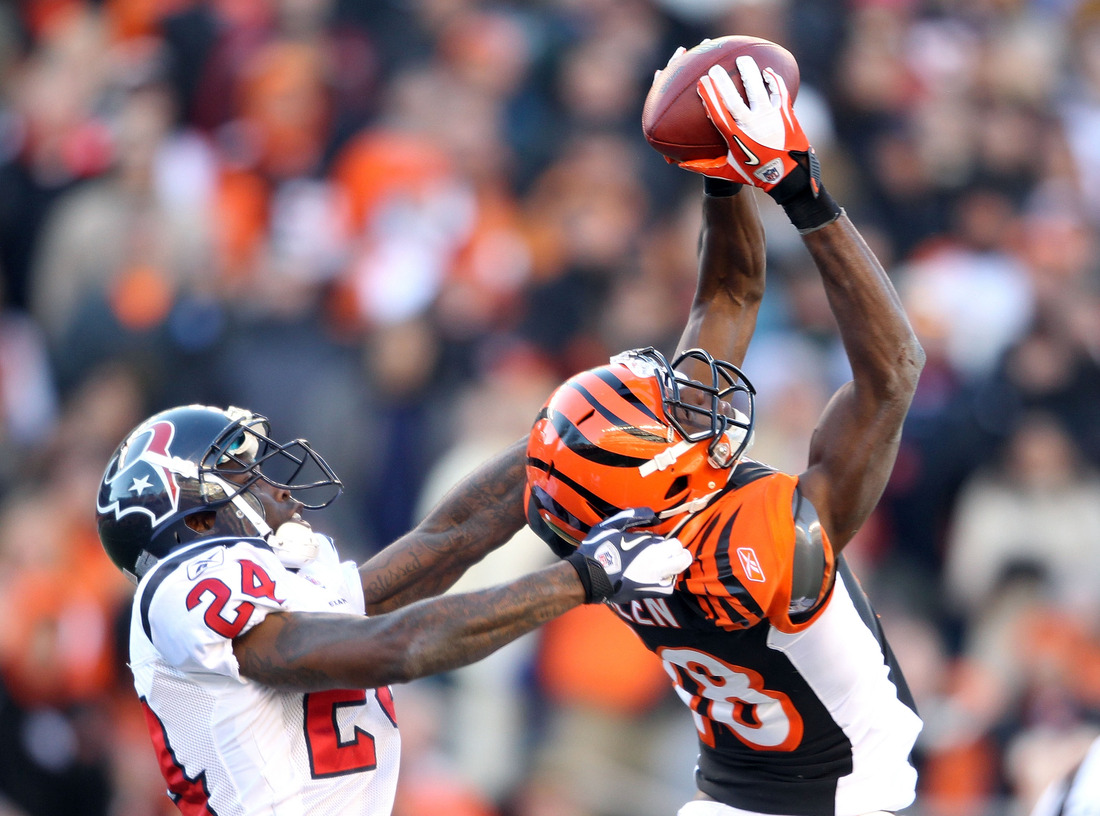 82. Houston Texans -- The offense isn't in great shape without Matt Schaub, but the defense is filled with quarterback killers (Barwin, Ryans, etc). and with a running game and tons of targets in the passing game to make T.J. Yates' life easier, Houston's more than capable of sneaking past this weekend, and then pulling off an upset in New England or Baltimore next week, just because the NFL is a weird place in 2011, where weird things happen so often that at this point we should just expect it.

81. Wade Phillips -- He SEEMS like living proof that being an NFL coach can't possibly be as hard as it looks. But ACTUALLY he's living proof that we never really give coaches enough credit. Here's a guy who's designed some of the most complex, effective defensive schemes the NFL's seen over the past 10 years, and all we can think of when we hear the name "Wade Phillips" is a silver haired coach that may or may not try to eat his playsheet somewhere during the second half.

52. John Fox -- Feels like he belongs on the Republican primary ticket. And if he was out there this year, would you bet against him?

51. Jim Schwartz -- Feels like he'd be a great wrestling promoter.

50. Tom Coughlin -- Your living reminder that no, NFL coaches would not be fun to hang out with.

49. Mike Smith -- Every bit as crazy and miserable as Coughlin.

48. Mike Tomlin -- Just one photoshoot with him and Lily Tomlin. That's all we ask.

47. Sean Payton -- Everyone talks about Belichick, Tomlin, the Harbaughs, even Mike McCarthy... But if we're talking about the NFL's no. 1 evil genius, Sean Payton might be at the top of the list. 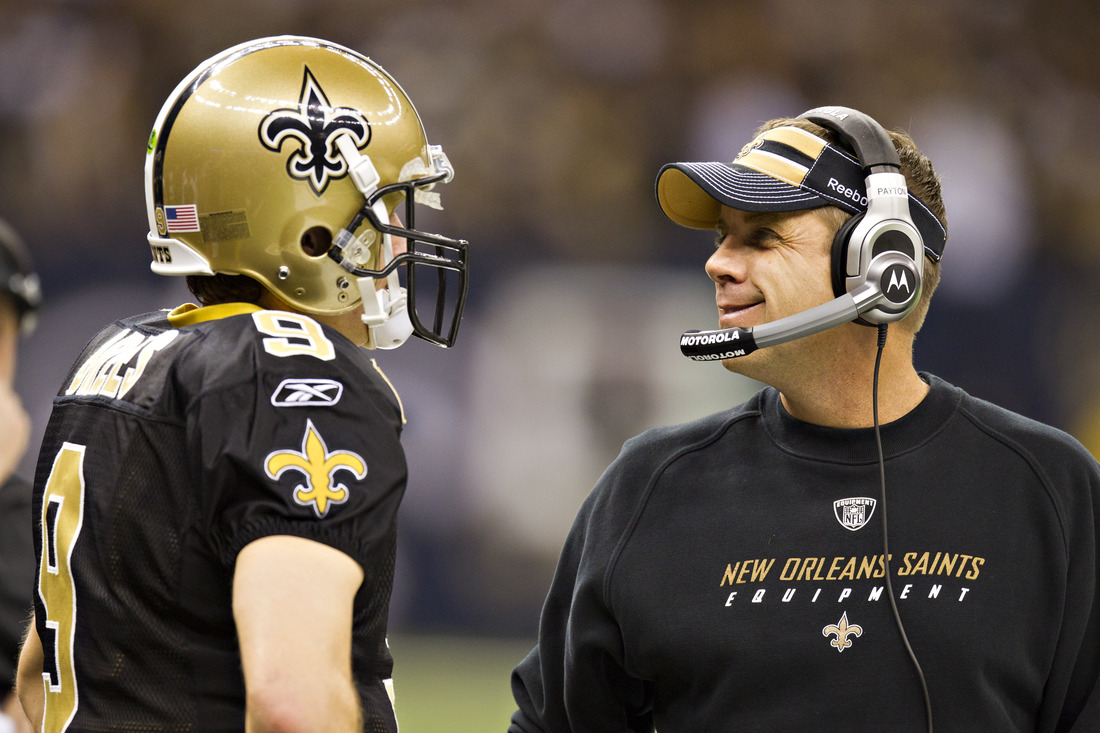 OK, BACK TO REGULARLY-SCHEDULED RANKINGS

36. Darren Sproles -- Undeniably the most adorable little running back in NFL history.

34. Ndamukong Suh -- Your friend at the bar who's a really thoughful, mild-mannered guy, but then becomes a whole different person when he drinks. The first few times he goes crazy, it's a weird thing that happens. After a while though, it just becomes "what he does." Can't wait to see what Suh does in the playoffs.

25. Ben Roethlisberger -- No rule out there saying an allegedly horrible person can't be a great playoff quarterback.

24. New York Giants -- They lost twice to the Redskins, once to the Seahawks, lost to a dying Eagles team, and nearly blew a game to a Dolphins team that was winless at the time. On the other hand... They beat the Cowboys twice, took down the Patriots on the road, and nearly knocked off the Packers at home. Betting against the Giants is so tempting, but still pretty terrifying. The Giants can play with anyone, they've got one weapon (their pass rush) that can single-handedly tear apart opponents, and Eli has quietly become one of the most consistent clutch quarterbacks in football. If they get past round one, all bets are off.

23. Justin Blackmon -- Just sayin, every other team this weekend has an obscenely talented wide receiver. It'd be pretty great to stick Blackmon on the Broncos this week, just for the hell of it.

20. Cincinnati -- The best thing to come out of Cincinnati--ever, probably--was Airborne.

19. Pittsburgh -- Still shocked that we have two cities ranked below Pittsburgh.

17. Denver -- ...But wouldn't it be funny if Outkast was from here? Imagine how often we'd see Big Boi pose with ski poles for no reason.

OK, WHERE WERE WE?

13. Matt Ryan -- This weekend isn't make-or-break by any means, but somewhere over the next year or three, Matt Ryan's either going to take a step forward and join Aaron Rodgers as one of the greatest young quarterbacks in football, orrrrrr he's going to become the football version of Joe Johnson, the first class ticket to a first round playoff exit every year. He should either be no. 35 or no. 5 on this list, so for now let's hedge our bets.

12. Jason Pierre-Paul, Justin Tuck, Osi Umenyora -- Can you imagine being a quarterback playing against these guys for even like, a quarter? Tuck and Osi have had quieter seasons than usual, but the trio still combined for 30 sacks this year. These motherf--ers are terrifying.

11. Atlanta Falcons -- Snuck into the playoffs when everybody was focused on the NFC East and the Lions. They've been the quietest team in the NFC all year long, really. They may not have quite enough to take down the Packers at Lambeau, but the Giants in New York? It's doable.

10. Pittsburgh Steelers -- Even if they've managed to win 11 games along the way, they've been uneven all year long. Remember how awful they looked against the Browns on Thursday night a few weeks? Or, um, this past weekend? Those were wins, but neither was really that impressive. And lest we forget the golden rule of the NFL's parity era: One of the teams from the past year's Super Bowl always goes down earlier than expected. It's not gonna be the Packers this year.

9. Eli Manning -- He's so close to being at the top of this list. It's unclear whether he's really good or shockingly lucky, or really good with bad teammates but happens to be getting lucky this year. In any case, the Giants were on the verge of falling apart Sunday night, and then Manning uncorked this throw to Victor Cruz to basically win the game right then. Unreal. Speaking of Cruz...

8. Victor Cruz -- Do you realize how many superstar receivers we've got this weekend? And isn't weird that we just called Victor Cruz a superstar? Sometime soon, that will stop being weird.

5. Mike Wallace -- The real Mike Wallace. If it wasn't for Calvin Johnson, this would be the best receiver in the league. He's great over the top, and intermediate routes become big plays because he's faster than anyone on the field. He's also only 25 years old, so we're really just scratching the surface.

4. Calvin Johnson -- The man, myth, the freak of f***ing nature. The Megatron MVP hype sorta died down after the first month of the season, but let's not forget Week 15, when he almost single-handedly lifted the Lions into the playoffs (214 yards, 2 TDs), and single-handedly killed the Raiders' season. He is as dominant as football players get.

2. Drew Brees -- Not saying he should have won the MVP this year, and nobody's saying he should be elected President of the United States in 2012, but if we ever had to elect a Team Captain for America, we would totally go with Breesus. So take that, Aaron Rodgers.

1. Tim Tebow -- You just KNOW he's going to end up pulling off something ridiculous. 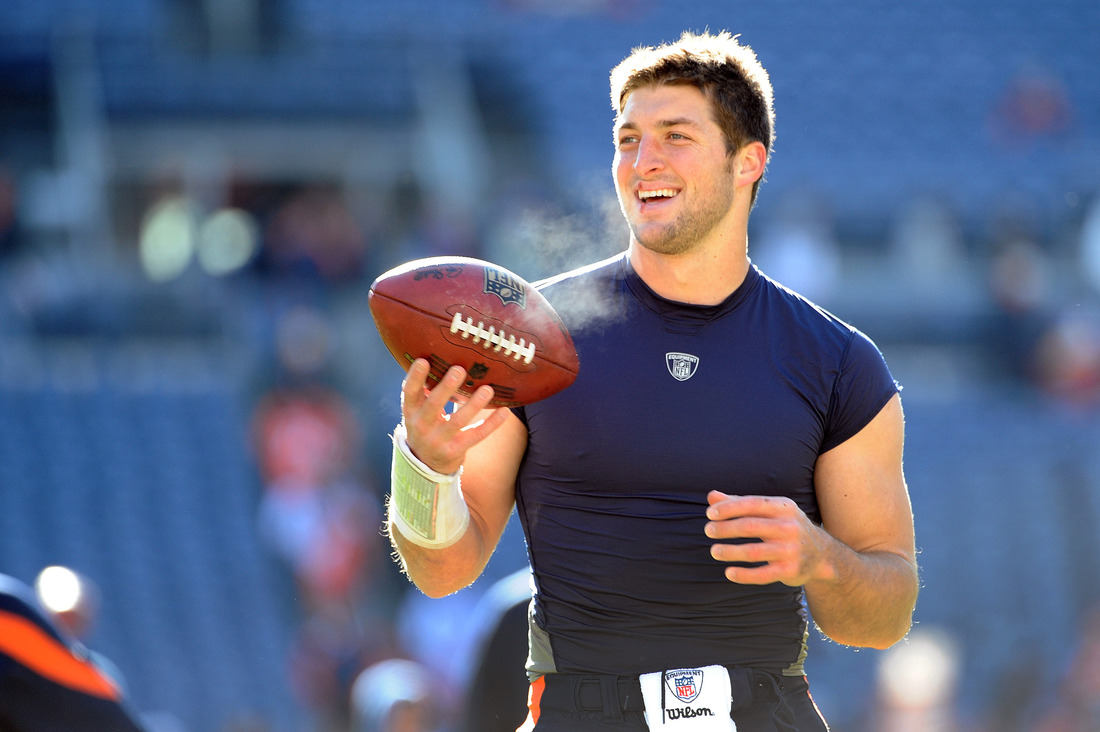