Mapping Tim Tebow's Road to Super Bowl XLVI: What Would God Do?

Yes, Tim Tebow played well, but the Broncos were also helped by the Steelers' misfortune. Did God play a hand? If so, what else might He do to help Tebow win? (Note: This is for entertainment purposes only. If you plan on taking this seriously, you should probably stop reading now.)

Share All sharing options for: Mapping Tim Tebow's Road to Super Bowl XLVI: What Would God Do?

Let's get this out of the way: Tim Tebow played well in the Broncos' 29-23 overtime victory against the Steelers on Sunday. He was still maddeningly inaccurate at times, but as the Steelers stacked the box and dared him to make throws, he punished them with a series of deep completions: five passing plays of 30-plus yards, including two 50-yarders to Demaryius Thomas in the second quarter and the game-winning 80-yard TD to Thomas in overtime. It seemed that the closer to heaven that Tebow threw the ball, the more likely it would land in a Bronco receiver's hands.

But before we anoint Tebow the second coming of John Elway or Xenu or whoever, let's also recognize the injuries and freak setbacks the Steelers faced leading up to Sunday. Ben Roethlisberger was hampered by a bum ankle. Rashard Mendenhall tore his ACL in Week 17. Pro Bowl center Maurkice Pouncey was out with a high ankle sprain (his replacement, Doug Legursky, issued a bad snap that took the Steelers out of field goal range at the end of the first half). Safety Ryan Clark was inactive because of a blood condition that prevents him from playing at altitude (the last time Clark played in Denver, the effects were so adverse that he lost his spleen and gall bladder). That bears repeating: Clark has a rare blood disorder that prevents him from playing in just ONE of 31 NFL stadia, and that happened to be the same one where Demaryius Thomas ran past Clark's replacement Ryan Mundy for the winning score. If that wasn't enough, running backs coach Kirby Wilson was hospitalized with burns on "30 to 50 percent of his body" after being rescued from a house fire in the middle of the night two days before the game. 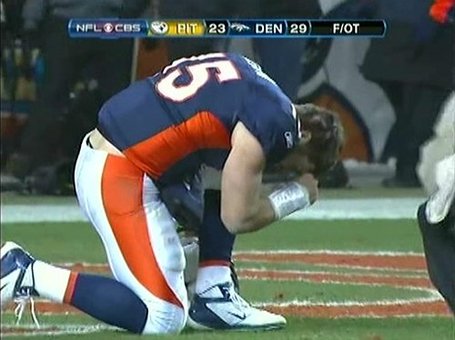 Now, I'm not saying that Tim Tebow prayed to God and asked Him to smite the Broncos' enemies with improbable misfortunes, but I'm not NOT saying that, either. What the following timeline presupposes is, "IF God wanted the Broncos to win the Super Bowl this year, what would He have to do?"

Thursday: Every Patriots running back misses practice after newly re-hired offensive assistant Josh McDaniels inadvertently gives them pinkeye. Reporters gloss over this issue, however, when Tom Brady shows up to practice without hair. Apparently, wife Gisele Bundchen shaved his head as he slept.

Friday: Brady is captured by Philistines, who stab his eyes out with swords before imprisoning him in Gaza. Bill Belichick lists him as "Questionable" on the injury report.

Saturday: Gameday. Without Gronkowski (syphilis) and Brady (blindness, Middle Eastern enslavement), backup Brian Hoyer favors Aaron Hernandez and Wes Welker, who also plays safety in the Pats' dime package (the depth chart took some hits as pinkeye spread through the locker room). Tebow plays like Tebow, completing eight of 18 passes for 175 yards with one touchdown and one interception, plus 80 yards rushing. With the game tied at 13 in the closing seconds of the 4th quarter, Stephen Gostkowski slips as he attempts the game-winning kick, sending the ball directly into the arms of Broncos defensive end Elvis Dumervil, who returns it for a touchdown as time expires.

Tuesday, January 17th: Ray Lewis is arrested for the murder of two Old Spice advertising executives who came up with the ad where Lewis, clad only in bubbles and a football helmet, rides a giant raven into space. He is held without bail.

Thursday: Ray Rice complains of numbness in his legs. After running tests, doctors confirm that he has polio. "Polio? Isn't there a vaccine for that?" says everyone. Rice's childhood doctor is summoned, and admits that he may have switched Rice's dose of the vaccine with saline. "My bad," he says.

Saturday: It rains frogs in Baltimore. Joe Flacco is unharmed.

Sunday: The Ravens defense, mostly intact, shuts down the Broncos' offense, returning two interceptions and a Tebow fumble for scores. With the Ravens leading 38-6 in the 4th quarter, a section of M&T Bank stadium's upper deck collapses and falls onto the Ravens sideline. Thousands are dead, including 90 percent of the Ravens' roster. In the wake of the tragedy, the Broncos are named AFC champions, and Tebow vows to win the Super Bowl in memory of his AFC competitors.

Monday, January 30th: Jimmy Graham tears ligaments in his knee while slipping on a patch of ice outside the airport in Indianapolis. Sports columnists nationwide bemoan Super Bowls played in cold-weather locations.

Wednesday: It's that day where the players talk to the media for two hours, and nobody says anything interesting, except for maybe one guy who says he thinks his team can win and then the other team acts all offended and uses that as motivational fodder for being disrespected. Saints kicker John Kasay is trampled by three dozen writers rushing to interview Tebow. He suffers facial contusions and three broken ribs, but is not ruled out for Sunday.

Friday: Marques Colston and Lance Moore are stopped by police after throwing snowballs at each other from across the street, which is seriously a crime in Indiana. Ordinarily, such a minor infraction wouldn't keep them from playing on Sunday, but Colston and Moore are detained for murder.

OFFICER 1: (reading their licenses) Well well, Marques Colston and Lance Moore, from New Orleans.OFFICER 2: I heard some guy got killed in New Orleans and they never solved the case. But you wouldn't know anything about that now, would you, Lance?MOORE: But there are hundreds of unsolved murders in New Orleans!OFFICER 2: You don't know when to keep your mouth shut, do you, Lancy Boy?

Sunday: Tebow completes two of 17 passes and loses two fumbles, but the Broncos defense picks up the slack by scoring two touchdowns. New Orleans ties the score at 17 with two minutes to play in regulation, because that's the way these things go. After the Saints kick the ball out of bounds to give the Broncos the ball at their own 40, Tebow leads the team to a first down before the drive stalls out at the Saints' 47-yard-line. Matt Prater kicks a 64-yard field goal to win the game. Tebow is named Super Bowl MVP for orchestrating the winning 13-yard drive.

As confetti streams down and the Broncos don "Super Bowl XLVI Champions" t-shirts over their pads, a reporter asks Tebow how he feels and thrusts a microphone into face. Tears streaming down his face, Tebow says, "I just want to thank..." A sob interrupts him. "I couldn't have done any of this without my..." He pauses, and tens of millions of viewers wait for the inevitable. "...my lover Brian. I love you, B!"

Pandemonium. Cars are overturned. Volcanoes erupt. The Rocky Mountains fold into the earth. The oceans rise, swallowing all land-based life. Our sun cools, fades. The oceans freeze. The world ends. Nobody goes to heaven. Jesus exchanges a high-five with the Mayan creator god Ajbit. "You called it, man!" He says. 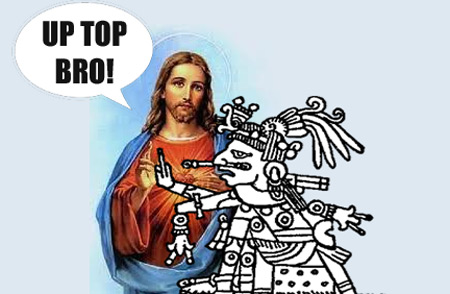