Tony Romo, LeBron James, and the dumbest SportsCenter segment of all time

We need to talk about something that happened on SportsCenter this morning.

Share All sharing options for: Tony Romo, LeBron James, and the dumbest SportsCenter segment of all time

It all started when one of the anchors teased the segment going into commercial break. "Cowboys fan LeBron James, Bears fan Dwyane Wade, teammates, but they were on opposite sides last night. Don't miss their Twitter trash talk!"

The tease alone is a perfect snapshot of everything that's horrible about ESPN. But okay, we know that. So just one of those obnoxious 15-second segments where they put a tweet on the screen and then read it?

Not that bad, right? WRONG.

1. Lindsay Czarniak: "LeBron was ready, LeBron was gettin amped up for the game." 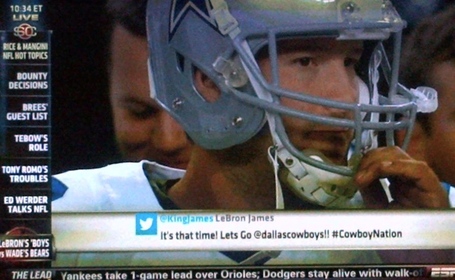 Wow okay so we're really doing this? This is SportsCenter?

2. "And then look, here's what he looks like while he watches:" 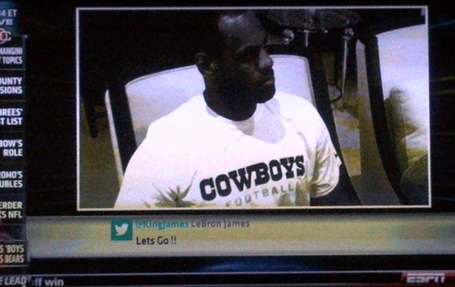 WHY IS THIS HAPPENING?

If SportsCenter is showing a picture from LeBron's Instagram, it should be something horribly inappropriate he accidentally posted at 4 a.m. in Vegas. Otherwise, WE DON'T NEED TO KNOW. Don't they realize that this stuff just makes people hate famous athletes? If Michael Jordan played in 2012 he'd be the most overexposed human on earth, and instead of being the most beloved athlete in history we'd all slowly come to hate him, and it would be like, 80 percent SportsCenter's fault. Maybe 85. 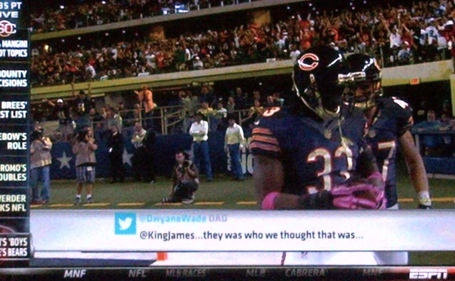 Note to sports networks: Athletes on Twitter aren't actually that clever! Seeing Wade misquote the most over-quoted press conference in history just reminds me why I don't follow Dwyane Wade on Twitter. 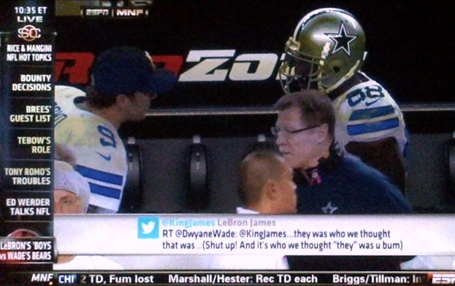 Was/were/whatever. This segment is making everyone so much dumber. 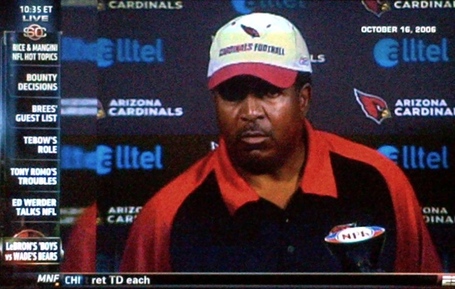 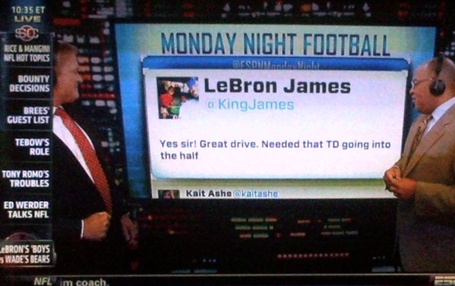 HOLY SHIT. The matrix has swallowed itself.

Note: it's not the anchors' fault here--I've been in love with Lindsay Czarniak since her days in D.C., and Kevin Negandhi seems okay. If anything we should feel even worse for them, the people who have to actively participate in this carnival of synergy and new media and head-splitting stupidity.

"Tirico, Jon Gruden, and the entire Monday Night crew, they were ALSO checking LeBron's Twitter handle." We are through the looking glass and the future looks shitty.

7. "LeBron, looking on the bright side, said 'Well alright, at least I can watch Spongebob Squarepants.'" 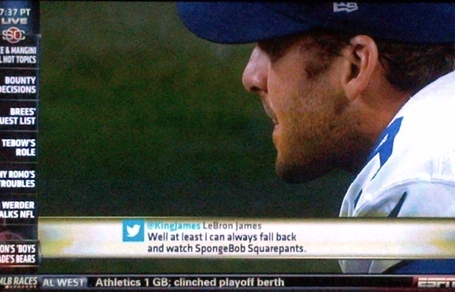 General rule of thumb: You should never pay attention to what they are actually saying on SportsCenter, because it will only make you sad. Now, let's all go watch SpongeBob SquarePants.