Bears vs. Lions: Why is Chicago so good and under-the-radar?

The Chicago Bears are one of the best team's in the NFL right now, so why are they not getting more attention?

Share All sharing options for: Bears vs. Lions: Why is Chicago so good and under-the-radar?

"Who are you, and what have you done with the Bears?" That's what I kept thinking as I watched Chicago deconstruct the Detroit Lions on Monday night, a Lions team that many had picked to sail by their NFC North rivals this season in 30-point chunks. Now the Bears are 5-1 with a viable claim to being the best team in the NFC. What happened?

The simple answer is defense. Chicago's stop unit stands apart in a season quickly being defined by dominant defenses. From front to back, the Bears defense is nearly flawless, or at least playing that way right now.

Windy City Gridiron took a few notes on Monday's game and points out this about the pass rush:

The Bears' had some decent pass penetration in the first half, particularly chasing Stafford into sacks by Peppers and Paea/McClellin, but pass protection improved drastically for the Lions in the second half, and on Ryan Broyles' touchdown in the fourth, there was zero penetration – Stafford waited forever for Broyles to come open in the backside of the end zone. But Corey Wootton had himself a pretty good game – he's really come on this year.

As a team, the Bears have 21 sacks this season. Only four teams have more, and all of those teams have played one more game than Chicago. Five players have at least three sacks, led by Henry Melton with 4.5. Wootton has three. McClellin, a widely panned first-round pick this year, has three as well.

Contrast Chicago's workman-like approach to pass rushing to their defensive backfield. Corners Charles Tillman and Tim Jennings are two of the best in the league right now. Both rank among the top 10 corners in the league, according to Pro Football Focus' stats.

Opposing passers are completing just 52 percent of their throws targeted at Jennings. He has allowed just one touchdown. No receiver has scored while being covered by Tillman, and that includes Calvin Johnson, who had just three catches for 34 yards on Monday. 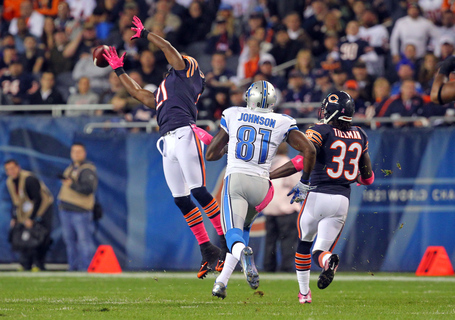 Some insight into how that group stopped Megatron on Monday:

The stats will say that Charles Tillman had a fantastic game on Calvin Johnson (and three receptions for 34 yards on 11 targets is a fantastic game against one of the league's top receivers) but he didn't do it alone. The Bears took out Johnson by having a safety over the top of him the entire game – whether it was Chris Conte or Major Wright, and both were called into action frequently and effectively. Matthew Stafford had a third-and-one play all queued up where Tillman jammed Johnson at the line, Conte was over the top, and Stafford still looked in Johnson's direction for a good few seconds before getting taken down.

The Bears have a league-high 14 interceptions and five defensive touchdowns. That helps when the offense is off its game, which it can often be. Turnovers preserved a tight margin on the scoreboard and kept the Lions offense from finding pay dirt once Matthew Stafford started to get the ball moving up and down the field.

The Lions had four drives that lasted eight plays or more. Those drives combined for 14:03 and ended in two fumbles, DJ Moore's interception and Ryan Broyles' touchdown with 30 seconds remaining in the game.

The problem with turnovers is that they tend to come in bunches, sometimes the result of luck more than will. Teams that live on the turnovers can be crushed by them as well when the ball isn't bouncing the right direction. The good news for Chicago – for the defense, at any rate – is that the unit can still hold off opponents without getting the ball into their hands.

Here's where things get more difficult for the Bears. Protection is the biggest issue. Jay Cutler has been sacked 19 times. Fortunately for the Bears, he is completing more than 50 percent of his throws when pressured. According to Pro Football Focus, he has thrown six touchdowns when blitzed.

But the Bears need to be aware of things like this:

Suh's sack precipitated an injury scare. Everything is said to be just fine, though. Losing Cutler last season sunk the Bears' playoff hopes

Running the ball is key for the Bears, and they are averaging more than 131 rushing yards per game on an average of 30.5 attempts. Matt Forte carried the offense on Monday night, continuing his ownership of the Lions defense with 96 yards on 22 carries.

Chicago hosts Carolina this week, and travels to Tennessee after that. Needless to say, the Bears should be favored in both of those games, but things get tougher after that.

In Week 10, the Bears host Houston, a team that could feast on Chicago's iffy pass protection. The week after that, the Bears are in San Francisco taking on another team using the popular model for success in the NFL this season, except Jim Harbaugh's offense has been a more efficient unit than Chicago's. The NFC North title could be on the line in Week 15 when the Bears get a second chance at the Packers, this one in Green Bay.

Watching Monday's game, I realized that I do in fact recognize these Bears. This is very much like the Bears team that Lovie Smith took the Super Bowl in the 2006 season, using the same recipe and toiling amid relative anonymity.

There's plenty of football left to be played between now and the Super Bowl. Things could still change. Better grab a bear mask just in case, though.