NFL picks Week 8: Can the Cowboys beat the Giants again?

The division standings are a mess in the NFL, but all that could change in Week 8, which includes a chance for the Dallas Cowboys to keep things close in the NFC East.

Share All sharing options for: NFL picks Week 8: Can the Cowboys beat the Giants again?

If your household budget depends on picking the right NFL teams to win this week, you are in luck. I have accurately and flawlessly picked every single NFL game this week, from Thursday night's tilt through Monday's Jon Gruden shout fest.

OK, you're here for business, so I'll dispense with the niceties. Here are your cannot miss NFL picks for Week 8.

The Vikings have won their last five home games. Opponents have scored 15 points or less in three of the four wins Minnesota has this season under the Metrodome's iffy roof. Much of Minnesota's success this season has to do with Adrian Peterson, who is currently on pace for his best season since 2008. Add in a stable quarterback, Percy Harvin getting his wish to be a No. 1 receiver and a stifling defense, and the Vikings aren't such a surprise after all. Tampa Bay is also a surprise, a huge disappointment. The Bucs had 500 yards of offense last week and still lost to the Saints.

A battle to control the middle of the AFC East ... hold on to your seats. As with every week, the question here is whether or not Rex Ryan finally has enough of Mark Sanchez kicking the ball out of the end zone and other amusing follies. It's like Ryan is dangling the red meat in front of the media, content with the attention and cognizant of what would happen when he finally flips the switch. New York won the Week 3 game on the road in overtime, but Ryan Tannehill is the little rookie quarterback that could, getting better as the weeks go by.

The Chargers may or may not have used Stick 'Em in a Monday night loss to the Broncos on Oct. 15. Whatever chemical company that makes Stick 'Em is adamantly denying that after San Diego coughed up a 24-point lead. The main difference between the Chargers and the Browns is that the Browns are now trying to fix years of hopelessness with a new owner ready to make changes. The Chargers, meanwhile, are content to allow Norv Turner to hover around .500 every season. Brandon Weeden has 495 yards, four touchdowns and a single interception in his last two games. If the 29-year-old rookie (the Browns!) can carry that momentum into this one, the Browns will take it.

Guess which team lost the last time these two AFC South rivals met? That's right, the Titans lost, 27-13, last December to a Colts team led by Dan Orlovsky. Things have changed since then, sort of. This one looks like a shootout. Tennessee's defense is the league's worst, allowing an average of 34 points per game. Only one of the Titans' opponents has scored fewer than 30 points. The key here is Chris Johnson. The Colts allow yards by the dozen to opposing running backs, and the Titans are 22-8 when CJ2K tops 100 yards.

Put another shrimp on the barbie! Wait ... this game is actually in London. The NFL really, really wants to establish a market across the pond, which makes it odd that the league insists on giving UK fans teams like the Rams and Jaguars. Tom Brady and the Patriots are favored by a touchdown in the eyes of most sports books, but the Rams are 5-2 against the spread thanks to a solid defense. The problem the Rams have is that it takes a Herculean effort to score 20 points. The Patriots don't have that problem. 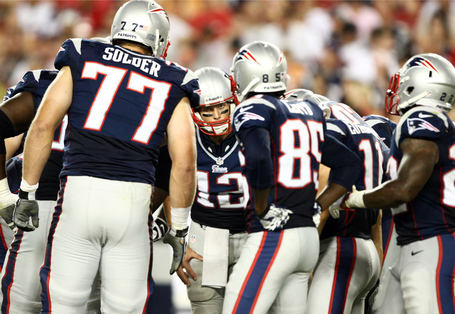 Who allowed this game to happen? Did the schedule makers think the Packers could use a midseason scrimmage? Aaron Rodgers is in midseason form, just in time for the middle of the season. Jacksonville will be without Maurice Jones-Drew, but they will have Blaine Gabbert, which doesn't matter at all. The one tangible benefit here is that just maybe Justin Blackmon, Jacksonville's first-round pick this year, gets a look at what happens when receivers actually care about their jobs.

Depending on which Eagles team shows up, this could be one of the better games of the week. Andy Reid sacrificed Juan Castillo last week, but the Eagles still have all kinds of problems, including an offense averaging almost three turnovers a game. Atlanta's defense just so happens to average the same number of takeaways.

RGIII leads the NFL with a 70.4 percent completion rate, and at 8.4 yards per attempt, it's more than just the byproduct of dink and dunk passing. He also has 468 rushing yards and six touchdowns, putting him on pace to challenge Cam Newton's rookie record for rushing scores. Nobody knows what to make of the Steelers, but all the bulk mail from AARP arriving at the training facility tells you something. Mike Tomlin's team has won nine straight home games against NFC opponents.

What happened to the Lions? Last season, they scored more than 29 points per game on average. This year, Matthew Stafford's offense is averaging 22.2 points per game. I suspect that the Lions offense will find its way. Stafford has thrown for 300 yards or more in his last four home games; there are signs of life. For now, I'll bet on Seattle's defense.

The Bears are rolling right now. The Panthers are ... struggling, to be polite about it. Chicago's defense rarely gets beat on misdirection plays. That could be a problem for Cam Newton and Carolina's confused offense, unless someone dropped something special in the suggestion box this week. 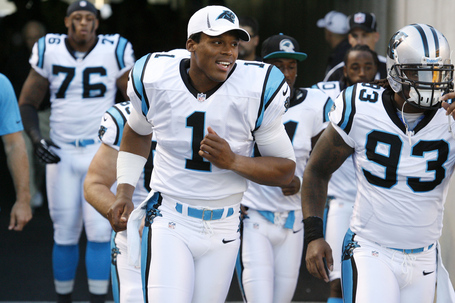 This game is happening because the league requires all of its teams to play 16 games, no matter how futile it may be. Here's a shocking statistic: The Raiders have won six straight games at Arrowhead Stadium, really. Kansas City's got Brady Quinn starting, Dwayne Bowe wants out, and everyone else is wondering when Clark Hunt is going to start making changes.

Dallas is the picture of mediocrity this season, barely getting by Carolina last week. Nevertheless, the intensity of this rivalry makes it likely that this game will be a much tighter contest than it should be. Tony Romo went all last week without an interception. Historically, he has played well against the Giants, too, with a rating north of 100 in his last six against Big Blue. Dallas is 34-8 when Romo finishes a game with a QB rating of 100 or better.

Sunday Night Football loves its superstar quarterbacks, the thinking being that average Americans can most easily relate to two men possessing an ability level far beyond that of any average American. Of course, NBC can always sell this one on the comeback stories. The Saints, already long on comeback stories, are trying to claw back into relevancy. Peyton Manning has that whole neck thing; I'm sure you've heard about it. Drew Brees needs two more touchdown passes to leap over John Elway, who had 300, on the all-time list. Subplots!

What will Jim Harbaugh do this week to further convince us all that he is insane? The spread favors the 49ers by four points. That seems awfully generous, considering John Skelton is the Cardinals' quarterback, and he has five surgically removed goiters trying to keep Aldon Smith from tearing his arms off. Then again, Skelton threw three touchdown passes in a 21-19 over the Niners last December.

NFL picks Week 8: Can the Cowboys do it again?