Tom Brady faces off against Peyton Manning, Drew Brees tries to one-up Johnny Unitas, and Mark Sanchez attempts to stave off Tebow for one more week. Plus, lots of stupid arguments! Get ready for the weekend with NFL Picks.

It's Week 5, somehow it's already October, and we're back with picks and lines for all this weekend's games. We went 10-5 last week, so here's to riding that momentum into this week. Let's all get rich! As usual, all picks in BOLD.

1. Good God that game was brutal. I clicked over in the third quarter and the Rams were punting, and I heard Brad Nessler say, "Well he's probably been the player of the game so far." NOTE: It's never a good sign when the punter is MVP after a half of football. The best part about Thursday's game: It was bad this week with the 2-2 Rams and 4-0 Cardinals, but think how bad this game was supposed to be when they scheduled it six months ago. Thursday Night Football is miserable. As I said a few weeks ago, we're all better off ignoring it forever.

3. Did everyone else already know about the Rams kicker before this week? 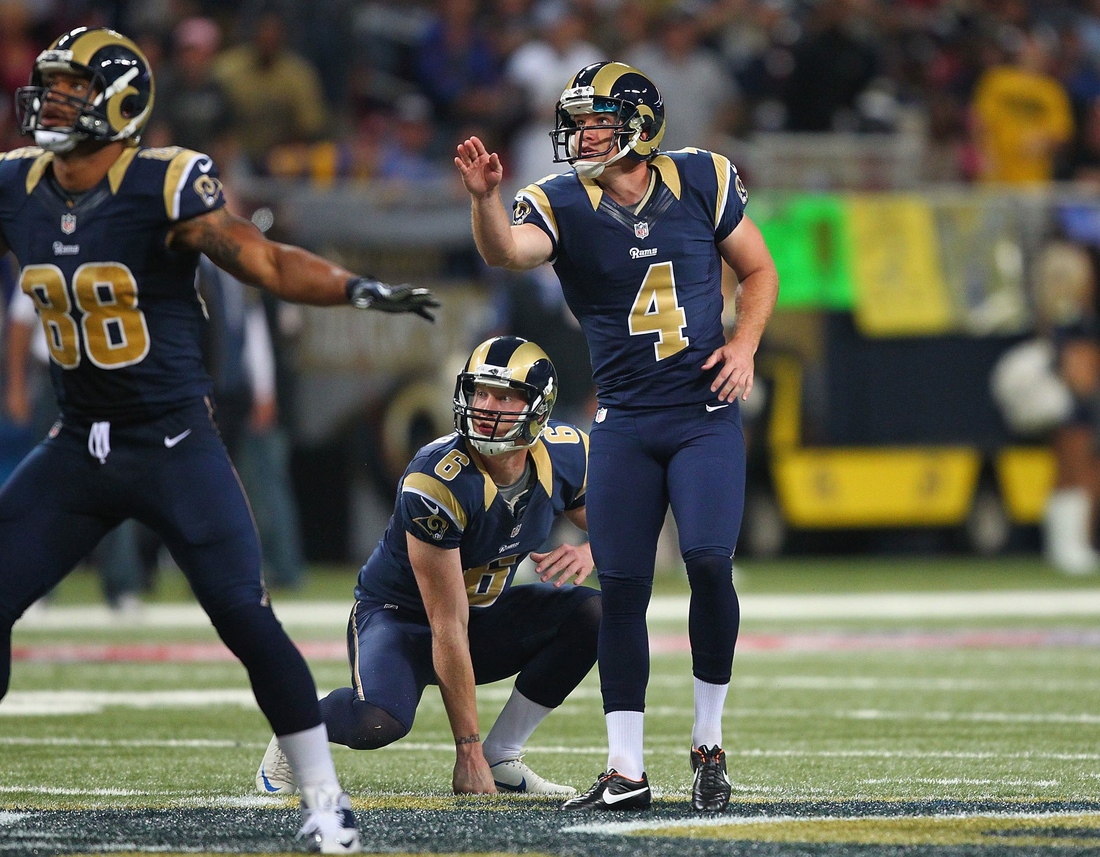 Greg Zuerlein. His nickname? YOUNG G-Z. This is the best nickname in the NFL, and there's no close second. Bonus points because everyone in the picture above looks hopelessly awkward.

Falcons (-3) at Redskins -- Both Sports Illustrated and ESPN: The Magazine did DC-themed issues this week, and as a lifelong Washingtonian, I can tell you that all of this feels like a set-up for something horrible. As a friend said this week, "All these 'DC is a sports town again!' pieces are gonna look pretty silly in a few months after RGIII gets injured, the Nats get swept, Ovi decides he's not coming back to the NHL, and John Wall comes back healthy, but still sucks." GET EXCITED, WASHINGTON.

But really, nothing's a better testament to how much D.C. deserves success than the paranoia that comes with every wrinkle of good sports news in this city. Like a battered spouse, D.C.'s just not capable of trust right now, and never will be until at least one of these teams actually wins a title.

Oh, and via Buzzfeed, here's a supercut of RG3 getting destroyed the past few weeks.

Eagles (+3.5) at Steelers -- Speaking of D.C., did you see the Dan Steinberg and Mike Wilbon war of words over the past 72 hours? It started when Wilbon trashed D.C. as a sports town compared to the rest of the country. "It’s terrible. It’s not even close ... It’s last…." After that, they've had a nice little back and forth, with Wilbon adding a Facebook post, Steinberg responding, and then Wilbon insulting Steinberg's clothes on another Facebook post. Excellent.

Ravens (-6.5) at Kansas City -- The best part about all the neverending Joe Flacco controversies is how completely irrelevant they are. Is he elite??? Is he overrated??? The Ravens were within a Lee Evans drop of a Super Bowl trip last year, and they probably would've beaten the Giants if they'd gotten that far. This year, whatever you think of Flacco, he's gotten at least a little better, and the Ravens have gotten better in general, too. So stop arguing about Joe Flacco. Whether he's elite or not, the Ravens are Super Bowl contenders, and Flacco is worlds better than Matt Cassel and 20 other quarterbacks in the NFL.

Seahawks at Panthers (-3) -- Speaking of quarterback controversies! The Cam Newton backlash never stops being hilarious. Over at ESPN, here's Pat Yasinskas jumping into the fray:

I saw the same thing back in small-town Pennsylvania in the 1970s and '80s. I had a neighbor and friend who was a grade behind me in school. Like Newton, he was a physical specimen. He also had one of those late birthdays, so in his final year of Little League he was playing with kids a grade behind him in school.

You know the type -- at 12, they’re 6 feet and 175 pounds. You see one of them carrying a team to Williamsport every year, and that’s exactly what was expected of my friend. He hit home runs in bunches and struck out almost every batter he faced during his regular Little League season.

Then he got to an All-Star game against a team from a much larger town. Late in the game, he gave up a crucial home run with a couple of guys on base. In anger, he slung his glove toward the dugout and his athletic career essentially flew with it.

SEE THE PARALLELS, AMERICA? As the article continues, "if [Cam] wants to truly succeed, he has to start acting like an NFL quarterback and act with some balance."

My friend Ethan Strauss e-mailed that me to say, "I love how Tom Brady yelled, 'Fuck you bitches!,' and Matt Ryan yelled, 'Get the fuck off my field!' in this same weekend." Indeed! If Cam Newton ever yelled either of those things we'd have 10,000 debates about his maturity and professionalism and it would be the most obnoxious week ever. Is Cam Newton really who we want representing the National Football League? Don't you think this is hip hop's fault? Can someone PLEASE teach Cam Newton Life Lessons 101?

I also really enjoy any Pro Football Talk article about Cam. Like, the second this article popped up--Cam Newton adds flash to already flashy pink shoes--you knew we'd be getting some fantastic responses. 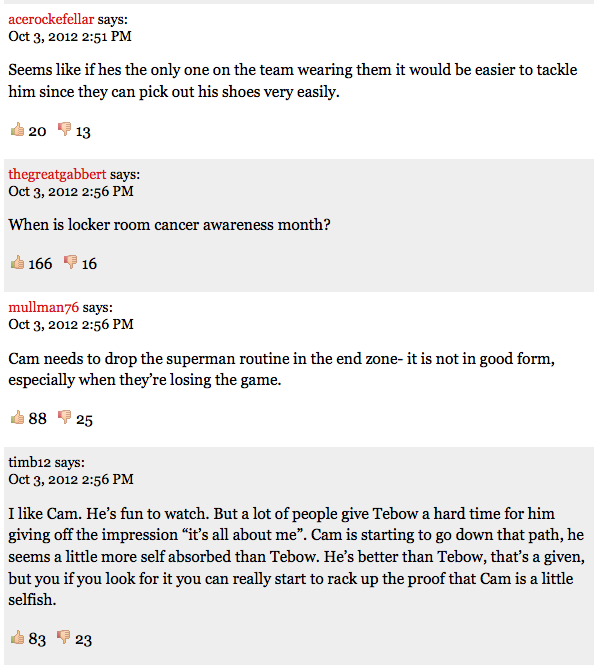 Anyway, last week Cam had 215 yards passing with two touchdowns and a 119 QB rating, plus 86 yards rushing and another touchdown. Can't anyone in Carolina fix Cam Newton??????????

Bears (-6) at Jaguars -- Jay Cutler is a national treasure.

Titans at Vikings (-6) -- If the Vikings hadn't blown that Colts game in Week 2, they'd be 4-0 right now. Sure, blowing that Colts game and going to OT with Jacksonville might be a bad sign about how good they really are, BUT STILL.

sooooo, when do i start worrying about the Patriots?

Tom Brady is pure evil. Still, this feels like one of those games that's unreasonably close until the very end and gets decided by a late field goal. (/cue 24-point Patriots blowout).

Bills at 49ers (-10) -- Not to get all political, but did you see that last week Mitt Romney called "Jack Nickalus the greatest athlete of the 20th Century"? Mitt Romney is the whitest man in the history of the universe. Now, let's all take a moment to remember Vince Wilfork the free safety.

Chargers at Saints (-3.5) -- What would you even do if your favorite team chose Phillip Rivers over Drew Brees? Yeah yeah, it kinda made sense at the time, but still. Watching him evolve into the best QB in the league and the coolest human on earth, while ALSO watching Phillip Rivers every week ... it's something that would legitimately anger me for the rest of my life. And this is a great example of why being a sports fan is insane and stupid. Because it means entrusting your happiness to men like Dean Spanos and A.J. Smith, and that will always end badly.

Report from my cousin at the Jets game: there is a line formed in mens room in Sec 227 to pee on Sanchez jersey

The Jets season has already been so much fun, and we're not even to the point where Woody Johnson forces Rex Ryan to start Tim Tebow. Enjoy all the games this weekend. October, let's do it!