NFL fashion jerseys: 9 ways to be the laughing stock of the sports bar

Sometimes trying to support your team may end up making you look like a jackass. Don't do that.

Share All sharing options for: NFL fashion jerseys: 9 ways to be the laughing stock of the sports bar

NFL teams roll out lots of crummy uniforms each year. It may be a lousy color scheme or an ill-advised throwback or whatever, but you can bet there will be plenty of people who think certain get-ups just look outright lousy. Still, if you were to wear one of these ugly jerseys to your neighborhood Buffalo Wild Wings or what have you on a fall Sunday, you'll simply be marking yourself as a die-hard fan, proudly presenting your team, warts (bad jersey) and all.

But then there are the so-called "fashion jerseys." These are different beasts entirely. These are the mock-ups that are inexplicably sold (and bought) with little regard to accuracy or color scheme. You've seen sports leagues license out their logos for use on non-canon attire for years. It might be a pink Red Sox jersey, or a rhinestone-encrusted Hornets cap, or perhaps a New Era baseball cap with a New Jersey Devils logo on the BRIM that says like "RADICAL DUDE" across the side of it, meant to be worn crooked. WHAT EVEN IS THAT?

The NFL seems to have thankfully ditched the bulk of the "official" fashion jerseys, but they still have a good number of Reebok abominations in the clearance section of the official NFL online store. You have to dig to find them, but they're there. We scrounged through their clearance section, some salacious bootleg sites and eBay to round up the nine jerseys that will absolutely mark you as the immediate subject of ridicule no matter where you should try to take in a game. These are jerseys so abhorrent that, even if you should try to watch the game in the comfort of your own home while wearing one, a vagrant will likely come to the window and begin heckling you. Better draw those shades.

One of the most immediate, defining characteristics of the worst "fashion" jerseys? The archaic belief that everything made for women must be PINK and SPARKLY, or else women would never want to adorn themselves with them. This is false, of course, but it does allow for plenty of laughs. 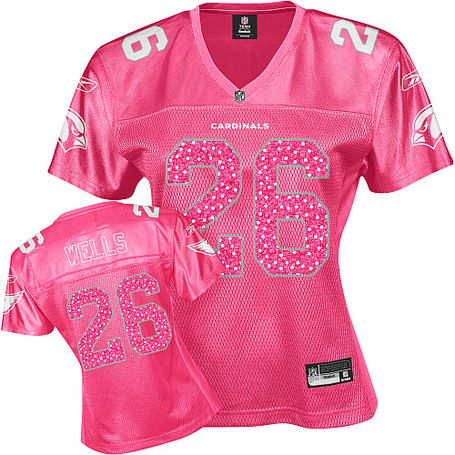 Here's a Beanie Wells jersey from the clearance section of the NFL shop. The sequins in the numbers are a nice touch, but in spite of all its pinkness and gaudiness, it retains the pretense of actually being a football jersey, with the numbers on the front and back, small team name on the chest, etc. The next few jerseys won't even keep up THAT pretense.

Honestly, though, the Cardinals are such a wreck at this point that they might want to consider wearing these bad boys on the field, just to have SOMETHING interesting happen.

Huh, the Cardinals are good again? 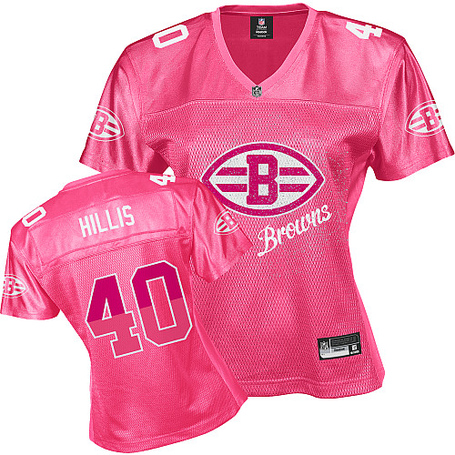 Next up, we have a similar -- but much worse -- Peyton Hillis jersey. That design on the front is actually an official Browns logo. I know. I was surprised, too. Although I don't believe that the Victoria's Secret-style "Browns" script is anything approaching "official." No, Peyton Hillis is not with the Browns any more. But you can still buy this thing!

I just noticed that these pink fashion jerseys have a nameplate on the back, rather than printing the player's name directly on the jersey like the sleeve logos and shoulder numbers. This seems like unnecessary attention to detail when the front of the jersey consists of A SPARKLY LOGO AND CURSIVE SCRIPT AT A JAUNTY ANGLE. 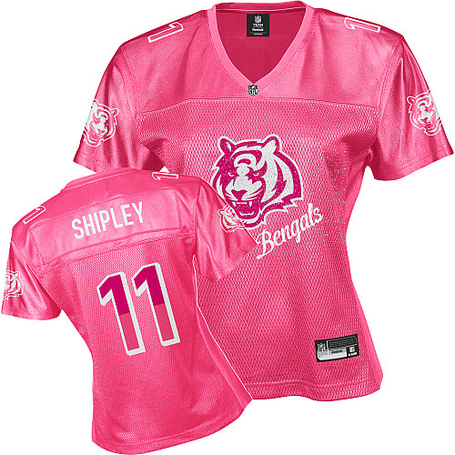 A Jordan Shipley Bengals jersey! Shipley is also not on the Bengals, so it is no surprise why this particular item is on clearance. Although this jersey is much the same as the above Hillis jersey, the sparkly sassy tiger really takes it to the next level. Particularly since said sassy cat it flanked by diminutive doppelgangers on each sleeve, as though it's a tiger a capella group. It's like a cat version of Glee. Which I guess would be the only way I'd consent to watching Glee ever again. 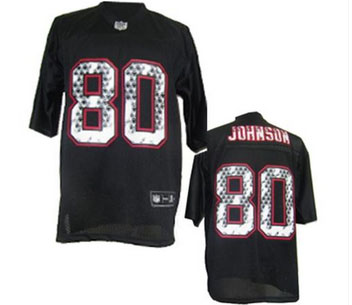 This is supposedly a Houston Texans jersey, meant to represent Andre Johnson. I don't know what the weird texturing on the name and numbers is supposed to be. Needless to say, this is a horrifically ugly jersey and in no way would sufficiently represent the Texans nor Andre Johnson. "Johnson," as you may have heard, is a fairly common name, not just in football, but everywhere. What this more closely resembles is a jersey from a 1990s movie about a football team. Not any existing NFL team, of course. One that, I dunno ... Damon Wayans plays for. The Bay City Wild Extremes, maybe. Or whatever team The Rock played for or against in The Game Plan. Maybe this is the jersey they gave Dwayne "The Rock" Johnson at the wrap party. But even that wouldn't be cool or impressive in any way.

Bottom line: if you wear this jersey somewhere, people are going to assume your last name is "Johnson" and that this is your own personal jersey. Like for a flag football team or something. Shameful. 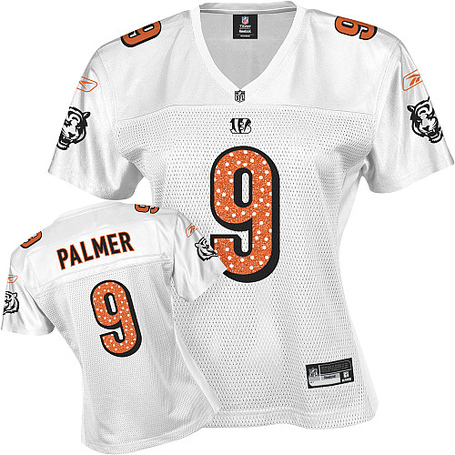 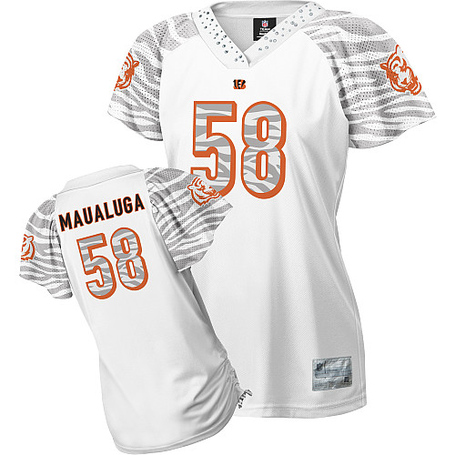 Look, the "clearance" section of the NFL online store may as well just be relabeled as the official Cincinnati Bengals store. But this may be the cream of the crap as far as the bargain-bin jerseys go. It's a Rey Maualuga jersey, which I guess is handy if you're getting into a bar fight but likely won't win you too many friends otherwise. It's got tiger stripes on the sleeves AND in the numbers, but not even team-color orange-and-black stripes; just sad, gray ones. Then you went and put haphazard sparklestuds all over the front of the collar and nowhere else. And the whole thing apparently ... uh ... ties on one side at the bottom? What is happening there?

Let's just move on. Nothing to see here. 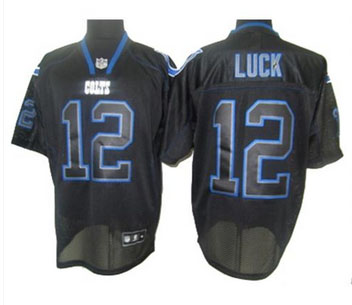 WAIT GO BACK GO BACK

OK, this is really gross. Granted, this is from what appears to be a fairly untrustworthy bootleg site, but the fact remains that someone made this and expected other people to pay for it. There is probably one person who will think this looks "good enough" and will shrug and say, "Hey, the price is right. I can represent!" This person will put this (apparently) partially see-through number on and go to a sports bar to watch a game.

I really, really hope that person is denied service. 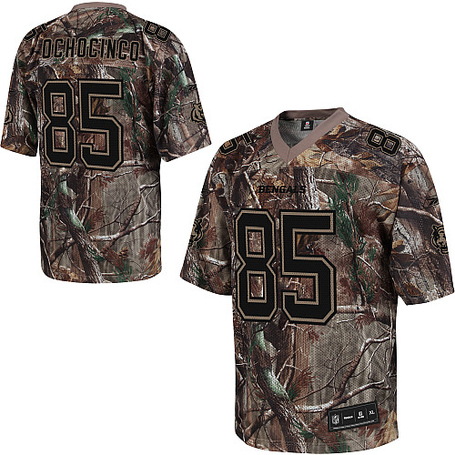 Where do we start with this one? OK, I guess the first thing to point out is that this is technically (again) supposed to be a Bengals jersey, as evidenced by the somewhat-visible "BENGALS" across the chest. This guy is under $30 on the NFL shop, but I think there is still some sort of typo here as this shirt is still a) for sale and b) has a price attached to it that is in real-world, human money.

This is a Chad Ochocino jersey. Not Chad Johnson, Chad Ochocinco. Further, this jersey is printed on FOREST CAMOUFLAGE. Are you supposed to go hunting in a Chad Ochocinco jersey? Are you meant to trick fellow (or perhaps rival) fans in the stands or in the grocery store that your upper torso is merely a swath of underbrush, interrupted by large numbers? Is this jersey insinuating that Chad Ochocinco comes from the deep, somber woods, like Santa Claus? 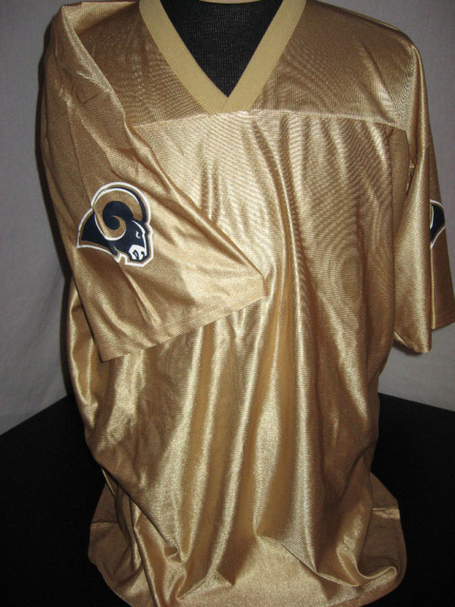 This is the work of a seller on eBay, who has fashioned an entire line of slinky, silky solid-colored jerseys with a simple team-logo patch on each sleeve. This is clearly the worst-looking possible thing that anyone could ever wear in support of a football team. This is terrible. Just terrible. But I guess at least the Rams jersey here has a vague Rams-esque gold and identifiable Rams patches on it. Check out the Browns version: 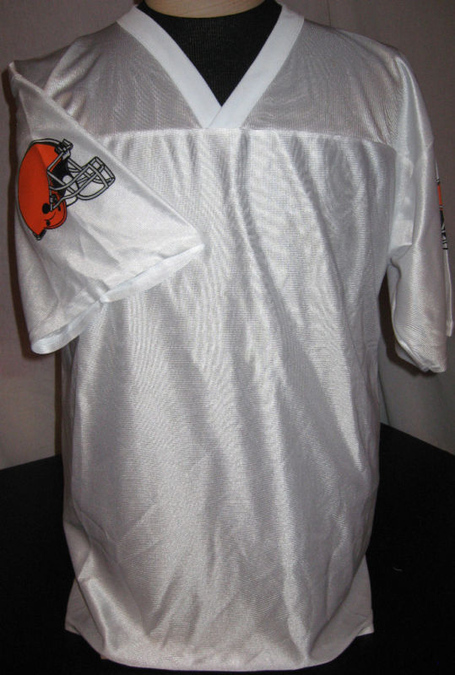 Just a silk white undershirt with a couple'a Browns helmets on the sleeves. No big D. At least the helmets are both facing forward. Surprised this person has the patch technology capable of doing that. I guess if you bring both of your shoulder toward each other, you could pretend you're watching a team scrimmage. Go ahead; flail your arms toward one another. You couldn't possibly look dumber if you're already wearing this jersey.

Instead of any of the above, why not go for something much more dignified? While you're still on eBay, you might want to pick up this little beauty: 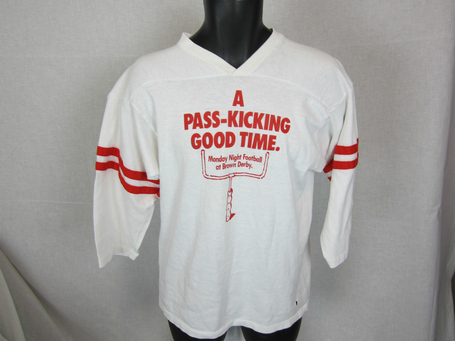 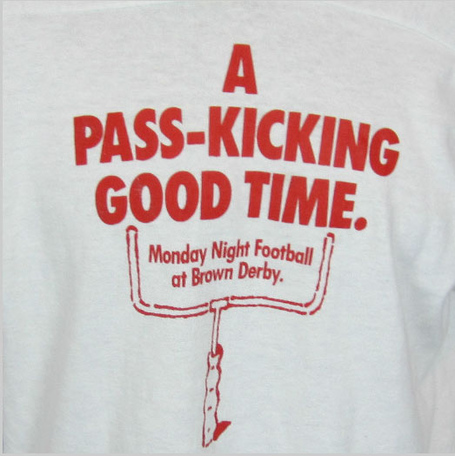 Ohhhhh, I get it. Yes, I shall select this Brown Derby jersey, whatever or wherever that may be. After all, I don't want to end up looking like a fool.