The Seismograph: How do we feel about our quarterbacks?

As NFL fans, we love seeing our quarterbacks succeed, but we're also happy to trash them whenever they fail us. But do we actually like them? In this episode of The Seismograph, we attempt to find out.

Share All sharing options for: The Seismograph: How do we feel about our quarterbacks?

Sometimes your favorite quarterback is your hero, and sometimes he is a baby-armed Marxist infant amateur cowardly idiotic child stupid fraudulent chickenshit baby clueless crybaby who should be benched and shot off to some planet more hospitable to horrible crap-ass quarterbacks with no pocket presence who just get sacked and throw interceptions all the time because they're awful three-year-old morons. This quarterback of yours is capable of being either of these things at any given point in time.

As I watched Sunday's NFL games, I began to think about how we talk about our quarterbacks. Some, like Matt Ryan, were brilliant. Others, like Mark Sanchez, were abysmal. Still others, like Jay Cutler, managed to be both in a single afternoon. Are we properly appreciative of our quarterbacks? Too forgiving? Too harsh? This episode of the Seismograph is my attempt to find out.

During the 1 p.m. games of Week 8, we saw a total of 18 starting quarterbacks. I scoured the game threads from SB Nation's NFL blogs, observed how these quarterbacks' fans talked about them, and assigned a score to each comment. This was my approximate scoring system:

I then mashed all the scores together and pieced together a minute-by-minute assessment. The green line is a collective representation about how NFL fans felt about quarterbacks -- just quarterbacks, in general -- during these 1 p.m. games.

Here's how the first hour went. 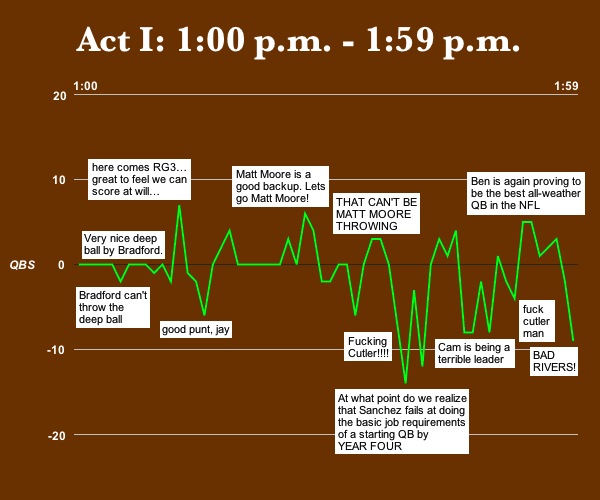 The sum of all comments scored in this first hour: negative-46. In other words, we were pretty down on our quarterbacks in the early going. Dolphins fans were pleasantly surprised by Matt Moore, who took over for the injured Ryan Tannehill, and Steelers fans applauded Ben Roethlisberger's game management. On the other end, Jay Cutler was suffering a complete meltdown, and Jets fans were quick to identify yet another crummy performance from Mark Sanchez. 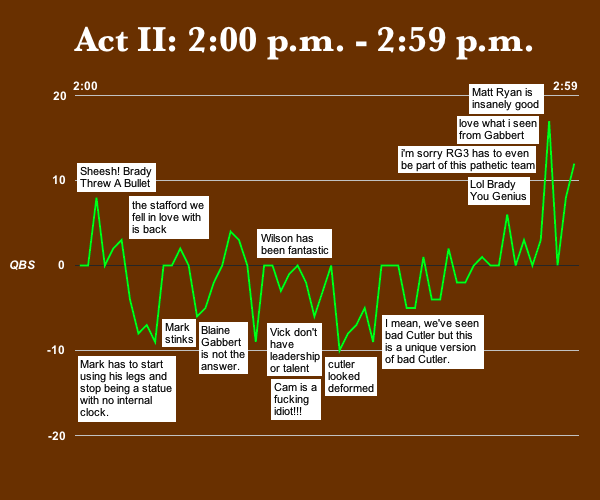 Between 2:00 and 2:59 p.m. Eastern, we grew even more negative, with a "quarterback satisfaction" score of negative-51. Lions fans delighted in Matt Stafford's apparent return to 2011 form, and Russell Wilson gave Seahawks fans a few things to cheer about, but for most of us, the second quarter wasn't a pretty one.

The folks at our Jets blog, Gang Green Nation, did not let up on Sanchez, and for this I can hardly blame them. The Windy City Gridiron commentariat found particularly creative ways of expressing what they thought of Cutler's abject collapse. Meanwhile, Blaine Gabbert, Michael Vick and Cam Newton found ways to contribute misery of their own.

As 3 p.m. neared, though, our spirits began to soar. Gabbert began to pull it together. Robert Griffin III heroically soldiered on, no matter how many passes his receivers dropped. Matt Ryan stepped into Kill Mode. Things were beginning to look good. 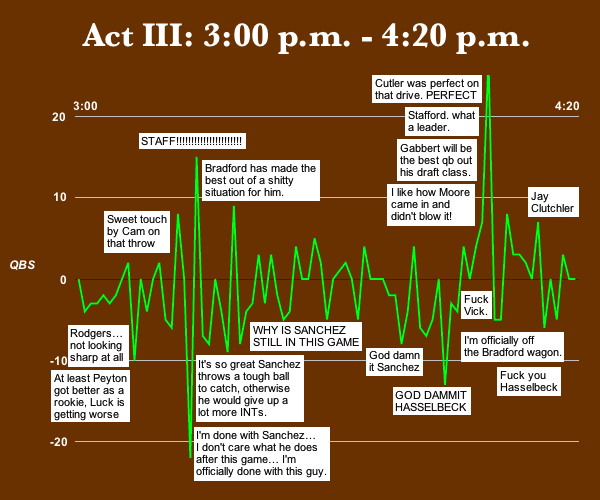 Here's where the Seismograph begins to zig-zag all over the place. A couple of Colts fans -- i should stress, literally two Colts fans -- began to doubt Andrew Luck's long-term prospects. Sanchez, for his part, threw an interception that sent Jets fans into despair. At nearly the same moment, Stafford threw a beautiful touchdown pass, and Sam Bradford did what he could to suggest that he is not the root cause of the Rams' struggles.

We reached the crescendo of happiness at around 4 p.m., when Jay Cutler -- unbelievably -- marched the Bears through a game-winning drive and redeemed himself. This happened as the rest of the games wound down to zero, and fans offered a few last bits of praise to the quarterbacks who had emerged as heroes.

I should note that when I looked through Windy City Gridiron's game thread and saw that someone had commented, "Jay Clutchler," I just about fell out my damn chair.

So. Before we wrap things up here, let's slice up the numbers in another direction. 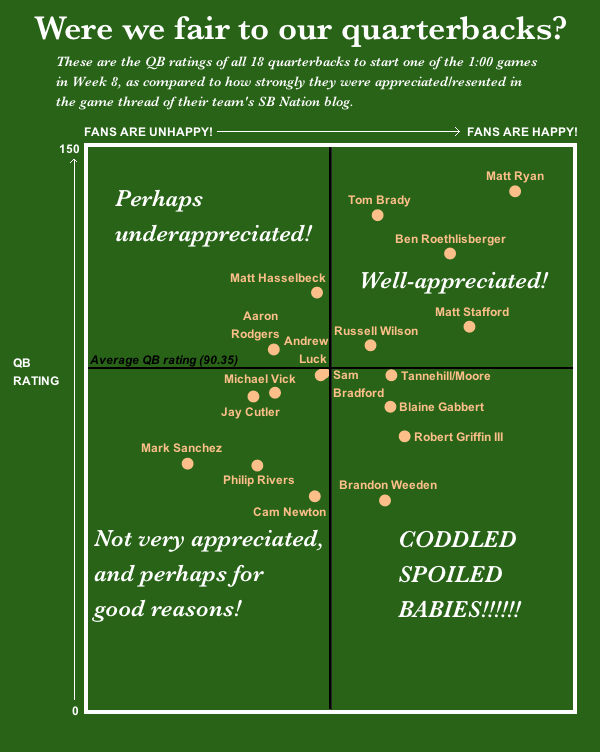 These quarterbacks are separated into four quadrants ... and frankly, I did not anticipate them to find themselves in such like company. I mean, look, we have:

Finally, here is the magic number:

This is the collective plus-minus of all rated QB-specific comments I gathered during these games. That's an average score of negative-0.85 per minute.

Note that these comments did not come from fans across the NFL, they came from fans of these quarterbacks' teams. For three-plus hours Sunday, we were unhappy with our own quarterbacks, and I suspect this is true on a larger scale as well.