The NFL's Week 10 injury report can be summed up in one word: concussion.

Concussion was the word of the day on the injury front in Sunday's Week 10 NFL action, with at least five high-profile players knocked out of their games as a result. Among these included three quarterbacks: Bears’ Jay Cutler, 49ers’ Alex Smith, and Eagles’ Michael Vick. Vick's status for next week’s game at Washington is very much in jeopardy after he left the field woozy and in obvious discomfort due to a series of hits sustained in his team’s 38-23 loss to the Dallas Cowboys.

Here are the key injuries from yesterday’s action, and their potential impact:

Vick sustained two shots to the head on consecutive plays in the second quarter of the 3-6 Eagles’ loss to Dallas yesterday, a sequence of events that served as a microcosm for the team’s season thus far and that leaves the Philadelphia quarterback's status for next week’s contest at Washington very much in doubt. The concussion, as well as an eye injury Vick sustained during the game, may have occurred on the first play when he was pummeled head first into the turf by Dallas nose tackle Jay Ratliff. On the very next play, Vick was knocked backwards by Cowboys linebacker Ernie Sims and had difficulty getting back onto his feet.

After a quick assessment on the sidelines and in the Eagles’ locker room, Vick was diagnosed with a concussion and yielded quarterback duties to rookie Nick Foles. Although the images of Vick looking woozy on the sideline left little doubt that he had sustained a concussion, how a team’s medical staff determines whether a player who has suffered a head injury during a game can return to the field has long been a subject of confusion. To address this, the league has made several adjustments to its formal policy over the past several years, calling upon teams to diagnose concussions – and remove injured players for the remainder of the game – based on the presence of a number of cardinal signs and symptoms, including:

• New and/or persistent symptoms (such as headache and nausea)

• Abnormal neurological findings (such as loss of balance)

• And progressive, persistent, or worsening symptoms

A team’s medical staff can use these symptoms, or rely on its own clinical judgment, to remove players from the game. However, with the exception of loss of consciousness, many of these findings can be subtle, and to aid teams in more challenging cases, the NFL has suggested teams conduct the following tests on the sidelines to help determine whether players can return to action:

• In the case of worsening symptoms, players will be screened for possible spinal injury or brain trauma more serious than concussions, such as a skull fracture or bleeding on the brain.

• Word recall: The five-word list they're asked to repeat.

• Concentration: Repeating numbers backward. It's not just three numbers. It goes up to five, like 7-1-8-4-6.

• Balance: In addition to the test with two feet together, there are others with one foot behind the other and standing on one leg.

• Symptoms checklist: Such as headache, nausea and dizziness.

Beyond the short-term complications of concussions listed above, a major concern regarding their impact involves the potential long-term effects of repeated head trauma, and particularly those sustained before full healing of a preceding injury.

Eagles’ head coach Andy Reid stated after the game that if Vick is cleared by team physicians this week, he will get the nod against the Redskins next Sunday. With Philadelphia’s season on life support, whether the team starts Vick or Foles, who did well with 209 yards passing and a touchdown, a win at Washington is imperative for the team to maintain any hopes of playoff contention. 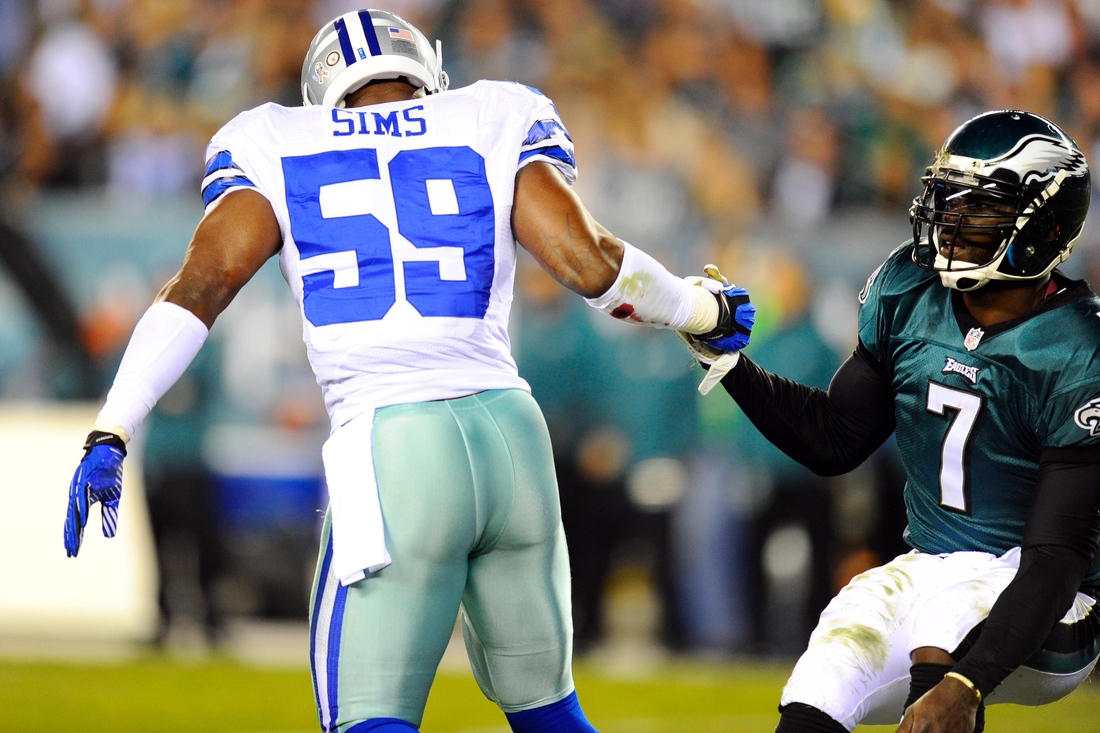 Cutler suffered a concussion on a hit to the head delivered by Texans linebacker Tim Dobbins late in the first half against Houston Sunday night, and he was replaced by backup quarterback Jason Campbell to start the second half of Chicago's 13-6 loss. The injury took place on a play in which Cutler ran past the line of scrimmage and was drilled by Dobbins as he released the ball, a play that was ultimately nullified due to penalty. Cutler stayed down on the ground for several moments and was visibly rattled following the hit, but stayed on the field for the final two minutes of the first half.

After being diagnosed with a concussion by the Bears’ training staff in the locker room at halftime, he yielded to Campbell, who was unable to spark the Bears' offense. Cutler’s status for Chicago's game next week at San Francisco will depend upon neurological testing to be performed by the team’s medical staff later this week. 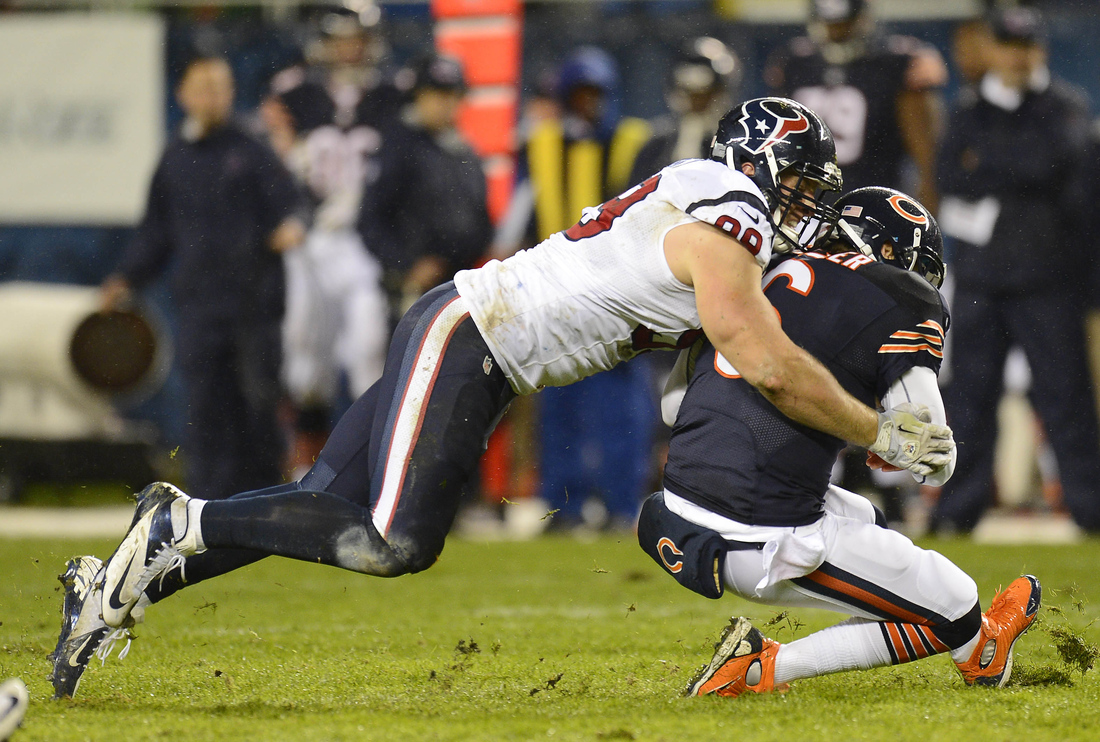 Smith was pulled in the second quarter of the 49ers 24-24 tie with St. Louis Sunday after experiencing blurred vision following a crunching hit by Rams linebacker Jo-Lonn Dunbar. Smith actually remained in the game and fired a touchdown pass to Michael Crabtree after the hit, which occurred when he scrambled to his left and sustained impact to his upper body and neck when sliding to the ground. Smith finished out the possession but was replaced later by backup quarterback Colin Kaepernick, who rallied the team to tie in the final minutes of regulation before failing to mount an offensive charge in overtime. Smith will be evaluated this week for persistent symptoms from the concussion, and the team will benefit from an extra day of rest with its Week 11 game against Chicago coming a week from Monday. 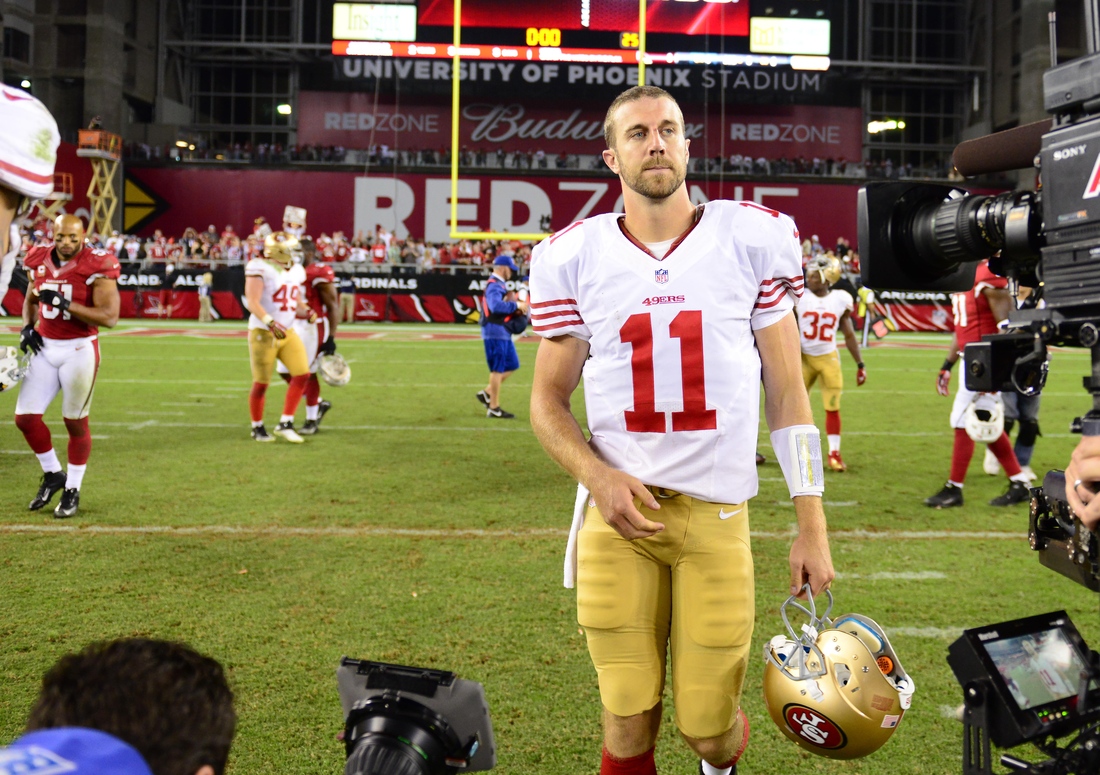 Perhaps the most frightening injury Sunday occurred in Tampa, when Black suffered an apparent neck injury while tackling San Diego running back Ryan Mathews in the Bucs’ 34-24 win over the Chargers. Black fell to the ground immediately and, after being evaluated on the field for several minutes by team trainers, had his neck immobilized and was removed from the field with a stretcher. The Bucs' linebacker was able to move all four extremities and gave a "thumbs up" signal to the crowd before being removed from the field and placed on an ambulance, where he was taken to a local hospital for observation. Although Black’s exact diagnosis and a timetable for recovery are unknown at this point, head coach Greg Schiano sounded optimistic at his postgame press conference that the measures taken by team trainers were precautionary in nature. 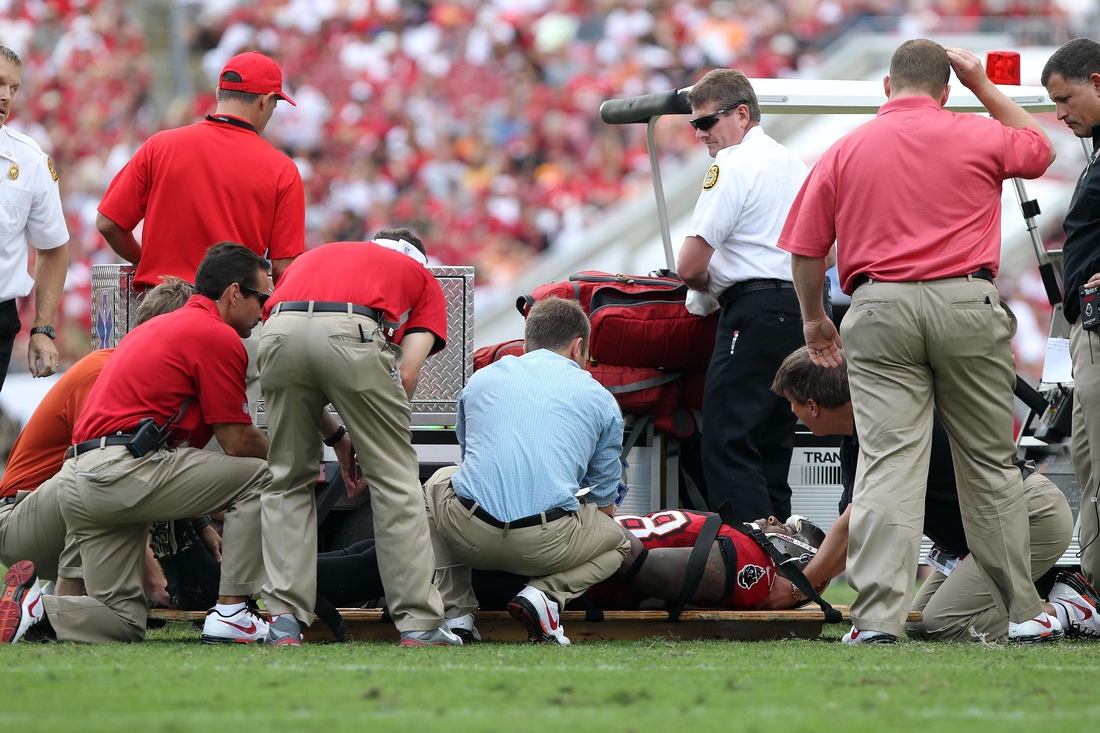 Adding to the parade of head injuries suffered by NFL players on Sunday was Avril, who left the Lions’ 34-24 loss at Minnesota during the third quarter after suffering an apparent concussion. Although it is unclear exactly how the injury occurred, Avril went down to the ground after a play early in the quarter and lay on the ground grabbing at his head. He left the field under his own power and attempted to return to the field, but returned to the bench after taking a few steps and did not return to action. As with the other players who suffered head injuries this week, Avril’s status for Week 11, in which the Lions host Green Bay, will be determined later this week after a neurological workup by team physicians. 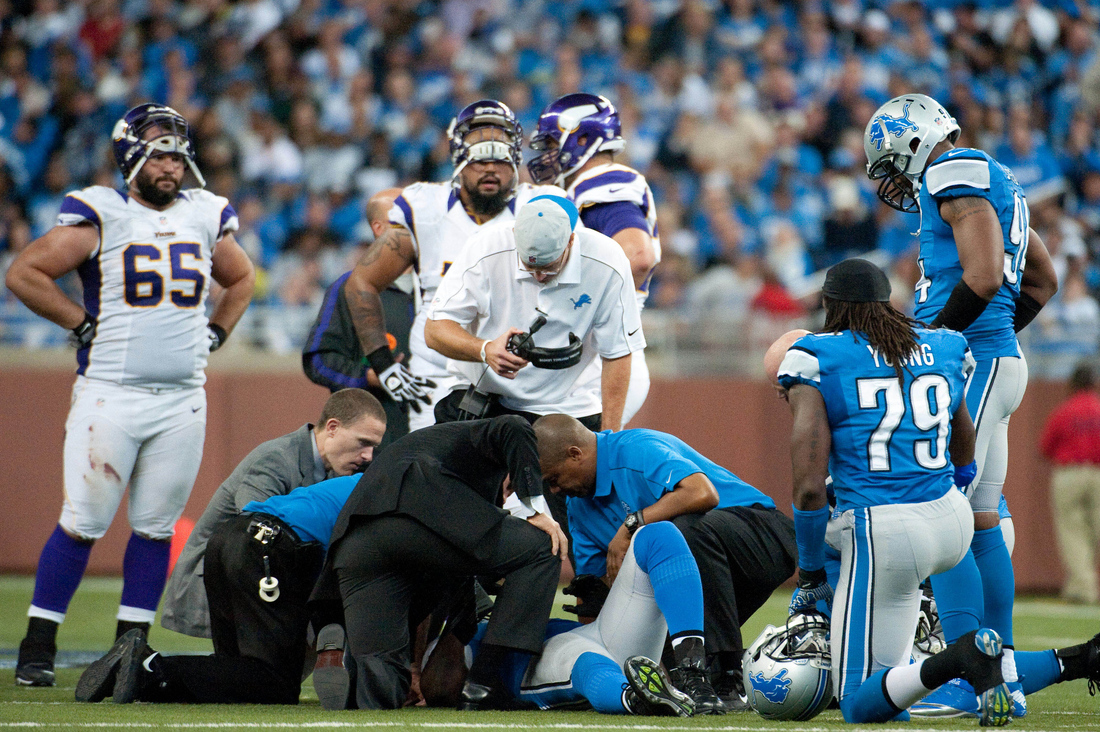 The Broncos’ ferocious pass rushing defensive end left Denver’s blowout win over Carolina in the first half after feeling a strain in the muscles of his left shoulder, and he did not return to action. Dumervil himself was unclear exactly when or how the injury took place, only that the discomfort made it impossible for him to continue. He is scheduled for an MRI of the shoulder Monday, which should help shed light on his prognosis for Week 11’s divisional matchup with San Diego.