It was an off-week for the NFL's rookie quarterbacks.

Did you feel that? There was a notable void in the universe this weekend. Robert Griffin III had a bye week. Andrew Luck played a scrimmage against the Jacksonville Jaguars on Thursday night. The NFL shelved its best and brightest youth, leaving us with a heavy dose of the olds and the concussed.

Do you really think we'd be spending this much time talking about a tie game in the NFC West if Luck and RGIII had played games on Sunday? Probably, but not as much. And these are two young quarterbacks who play for the Colts and Redskins. When was the last time you cared about the Colts and Redskins, with the notable exception of your geographic rooting interests?

America's creepy camp counselors still had a pair of rookie quarterbacks to focus on this weekend, Ryan Tannehill and Russell Wilson. One's stock trended upward, while shares in the other one had a correction. But let's start this little roundup in Jacksonville, with Andrew Luck. Let's face it, the other members of 2012's rookie quarterback class may turn out to be fine players, but they are not Luck and RGIII. 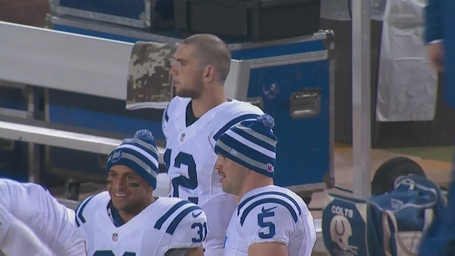 As a passer, Luck was purely middle-tier. He completed 18-of-26 passes for 227 yards and an interception. We cannot overstate Reggie Wayne's role in Luck's first-year success. Every rookie quarterback should have a receiver like that to work with. Wayne caught eight passes for 96 yards. He leads the league in receptions and yardage, but his three touchdowns are pretty far down the leaderboard.

The problem with one good receiver is that defenses can just put him in bracket coverage and take him away as necessary. Luck worked around that problem using Donnie Avery and T.Y. Hilton and working the deeper part of the field. According to Pro Football Focus, 169 of Luck's 227 passing yards came on throws targeted at least 10 yards from the line of scrimmage.

That's all well and good for beating Jacksonville's secondary between the 20-yard lines, but it leaves a quarterback lacking for options inside the red zone. No matter. Luck made himself his own best option in the red zone, running for both of the Colts' touchdowns in the win. It was the second time this season that Luck ran for a pair of touchdowns. He now has five rushing touchdowns, which trails RGIII by one for the most by any quarterback in the league, rookie or veteran.

So, yeah, Luck is a pretty well-rounded talent. He's also lucky not to be on the long list of concussed quarterbacks this week.

The constant tisk-tisking of risk-taking quarterbacks get annoying. That said, this week's injury report is a stark reminder of just how quickly the NFL could lose two of its brightest stars. Luck got hit in the head in the first half on a play that drew a flag for roughing the passer that saved the kid an interception.

Later in the game, when Dawan Landry picked off the Colts quarterback, Luck threw himself at the safety as he headed up the field, taking a shot right at his legs that probably should have been penalized itself. Landry got back at Luck later in the game, giving him a shot as he slid on a scramble in the fourth quarter.

Does that hit look familiar? St. Louis Rams linebacker Jo-Lonn Dunbar delivered a similar one on 49ers' quarterback Alex Smith, who left with a concussion.

Concussions don't occur every time a player takes a hit. Head trauma is still there.

RGIII has already suffered a concussion this season. Head injuries come with the game of football, right or wrong. You can bitch about the flags that get thrown for plays like that, but if you do, you have to be content with the Nick Foles of the world.

1. Andrew Luck, Indianapolis Colts - I'll probably take some heat from Seahawk fans for putting the Colts' rookie above Wilson. I'll freely admit my own bias here. Luck's work in the red zone with his legs gives him the edge.

2. Russell Wilson, Seattle Seahawks - This guy really is getting better as the season progresses. Of course, beating up on the Jets these days isn't what it used to be. Golden Tate threw a touchdown pass in this one. Marshawn Lynch is to Wilson what Wayne is to Luck. Yes, they play different positions, but each player takes a tremendous amount of heat off the rookie signal caller. Wilson threw two touchdowns and went 12-for-19 with 188 yards.

3. Ryan Tannehill, Miami Dolphins - I'm not really sure what happened here, besides the obvious fact that Tannehill was awful. I challenge anyone to explain some of his decisions in the first half of the game. It looked like he stuck to his primary targets regardless of the situation. There was nobody around Colin McCarthy when Tannehill threw the ball right to him. 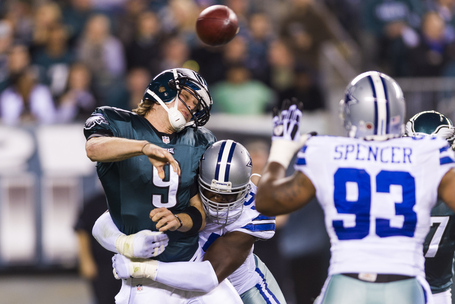 4. Nick Foles, Philadelphia Eagles - Nick, congratulations, you've been selected to help prop up Andy Reid's sagging fortunes. A pick six, a strip sack ... it was a rough fourth quarter for Vick's replacement. He did manage to connect for his first NFL touchdown thanks to Dallas' secondary taking some time off from coverage. The real highlight for Foles was doinking Jason Avant in the head with the football, summing up the Eagles' 2012 season in a single play.