REMINDER: Rex and Rob Ryan are everything that's great about the NFL

Rob and Rex Ryan have had a rough couple of years, but they are still a lot smarter than you think. And win or lose, they're a constant reminder of everything that's great and ridiculous about football.

Share All sharing options for: REMINDER: Rex and Rob Ryan are everything that's great about the NFL

There's an old story I once heard about Rex and Rob Ryan as teenagers:

He and his brother Rob... They were knucklehead 16-year-olds trying to steal beer out of the ice chest in the back of our cars. Buddy Ryan used to just cuss 'em out, sayin 'What a bunch of idiots!' But the nut doesn't fall far from the tree, you know what I'm saying?

This came from Dan Hampton -- a defensive lineman who played for their dad, Buddy, during the '80s in Chicago -- on a radio show, and it's EXACTLY how we all would have imagined the Ryan brothers as teenagers. Other coaches have their legends enhanced with tales of working 800-hour weeks as interns for some coach in the '80s. The Ryans cut their teeth in the NFL by stealing beer from Dan Hampton's trunk. This is a crucial difference, even if it doesn't actually make them that much different.

Both Ryan brothers are coaching on Thanksgiving this year, and because this series is about families and football, now seems like a good time to talk about Rob and Rex Ryan. Or more specifically, why I'll love Rob and Rex Ryan for the rest of my life.

Mind you, it's not actually the best time to talk about Rob and Rex Ryan. That would've been two years ago, when Rex had just finished giving us a Hall of Fame performance on Hard Knocks and had a Jets team that would ultimately end up in the AFC Championship. At the same time, Rob was one of the most coveted coordinators in the league, and widely assumed to be headed for a head coaching job of his own. They were the NFL's rock stars.

Since then, they've come back to Earth a little bit. Just this week, Will Leitch had a long column in New York Magazine mourning Rex's demise with the Jets. Likewise, the buzz surrounding Rob's career has quieted since he went to Dallas and failed to turn around the Cowboys defense.

But in fairness, Rex is losing mostly because he has a terrible quarterback and a roster that's been mismanaged for three consecutive years. Rob struggled with a Cowboys defense that was horribly overmatched in the secondary last year, and this year. The Cowboys are quietly seventh in the league in total defense. He's faring better than he gets credit for.

In any case, the recent backlash makes me love them more. Because even when they're losing, they are still both loud, awesome reminders of what the greatest coaches in the world SHOULD look like. Watching them struggle with underwhelming rosters just makes me root that much harder for one or both to get the last laugh in the long run.

Look at the other coaches dominating football. Belichick, Saban, Coughlin, the Harbaugh brothers... I talked about this in a Pete Carroll article a few weeks ago, but there's been this movement lately to worship coaches almost like we're talking about military leaderss. Their brilliance, their preparation, their precision, their unsmiling inhuman work ethic, their dedication to discipline. There's probably a connection between how football is trying to sell itself in the 21st Century -- a game dominated by masterminds, not chaos -- and the genius-fetishizing that's become ubiquitous. But whatever it is that started it, today's best coaches are 10 times more revered than any of the best players. (Example: Tom Brady's the greatest quarterback we've seen in 20 years, and people still point to Belichick when they talk about the Patriots insane run of dominance.)

All of which leads to the question: If we're going to worship coaches, would we rather our superstar football coaches look like the Harbaugh brothers or the Ryan brothers?

The Harbaughs have become known as brilliant tacticians and OCD geniuses, while the Ryan brothers almost give the impression that there was never any gameplan beyond "KICK ASS" written on a whiteboard somewhere. But before we answer the question above, let's be real: In a football context, the Ryans are just brilliant as Jim Harbaugh or Bill Belichick or any other great coach. At the NFL level, every coach is killing himself with 18-hour days gameplanning themselves to death, and both Ryan brothers have already had enough success to prove they can match wits with anyone in the league. They just manage to make this fun, too.

Next to the Coughlins and Belichicks of the world--who've always seemed determined to suck the life out of just about any room they've ever entered--the Ryan brothers are pretty refreshing. Example: Earlier this year Rex Ryan said that Rob Ryan was in tears when they talked about Cowboys linebacker Sean Lee going down for the season. Rob's response? 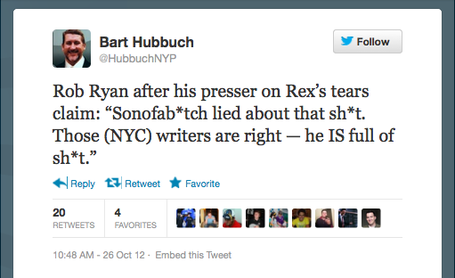 Stuff like that probably obscures their expertise, but only to people who aren't paying attention. So to rephrase the question from earlier: If you accept that coaching IQ is mostly equal among the 10 or 15 best coaches in the NFL, how could anyone NOT love the two men who make football look 10 times more awesome than any other coaches in the NFL?

Beneath all the outrageously intricate schemes and pedantic Bob Costas monologues and NFL PR campaigns, the soul of football is every bit as unhinged and ridiculous as the Ryan brothers. AND ISN'T IT BEAUTIFUL?

Football is the place where people like Rob Ryan can hold a position of authority for years at a time. It's a place where coaches can give motivational speeches like this.

We didn't first fall in love with this stuff so we could track where the safety goes on the zone blitz and gawk at the blocking schemes that separate a trap play from a counter, and we don't love football because the Detroit Lions remind Bob Costas of what a winning team can mean for a city that's seen decades of losing on and off the field. We love football because it's a special corner of the universe where raw insanity is not only allowed, but encouraged, and every week it all turns into an acid trip of highlights and hitting and adrenalin that no sport on earth can match. It's messy and ridiculous and kind of horrifying in a hypnotizing kind of way.

And for the reasons listed above, football is going to die one day. It turns out a game built on superhuman giants crashing into each other with radioactive levels of adrenalin can be pretty dangerous. One way or another, the days are numbered for football as we know it. In some ways it's already changed. And I don't know whether I'll have this conversation with my kids or my grandkids, but I've accepted that at some point I'm going to be the old guy watching the new NFL, trying to explain what I loved about the football we used to have. That's when I'll probably end up showing them Ed Reed's halftime speech, Rex Ryan's training camp speech, and shoving a picture of Rob Ryan in their faces, saying, "THIS MAN WAS EVERYTHING THAT WAS GREAT ABOUT FOOTBALL." 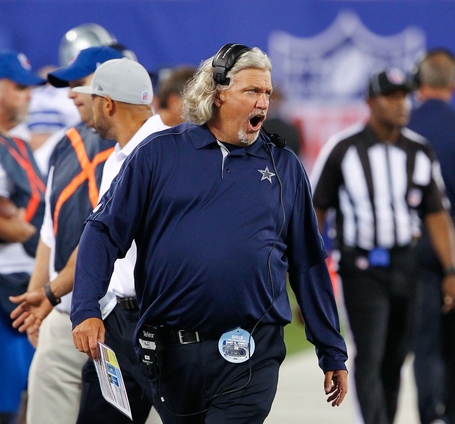 It may not make sense now; it will definitely not make sense then. But that's all I got. I love the Ryan brothers because they embody what's always made football different from other sports. A game dominated by men who aren't exactly smart, but are stupidly brilliant in exactly one context. Full of characters you couldn't make up who probably aren't totally right in the head, driving awful vans and resolving foot fetish controversies at the Pro Bowl, cursing their way through press conferences, and generally blowing our minds at every turn. The Ryan brothers are the absolute best, and to paraphrase Rex in that training camp speech, I don't care if you know it or not.