The two best teams not named the Falcons meet in Chicago for the GAME OF THE MILLENNIUM (of the week). 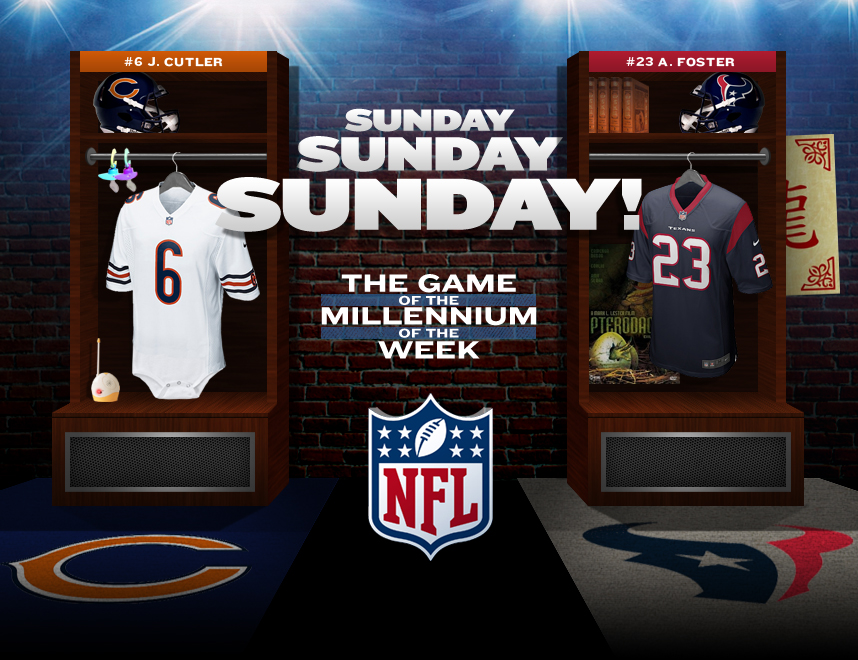 The easy play here is to lead with a crack about the Bears. It might not be all that appropriate considering the Bears possess a viable claim to being the best team in the NFL right now at 7-1. It's an impressive start for a team whose quarterback is looking like he doesn't give a shit ... about anything.

Houston brings a 7-1 record of their own into this week's game of the millennium. Both the Bears and the Texans have the distinction of losing to the Packers. We will wake up Monday morning with a better idea about each squad's playoff preparedness and which team is more worthy of being listed behind the Packers in the eyes of America's esteemed football writers, records be damned.

The Bears and the Texans are nearly impossible to distinguish, on the surface. Rugged defense defines both teams. Versatile ground games and running backs adored by fantasy football people everywhere provide the majority of the offense, and in much greater quantities than we expect in a league supposedly infected with creeping spread concepts. Chicago averages 29.5 points per game; Houston 29.6.

Cutler and Matt Schaub, the two quarterbacks, might be the least essential component to either team. Nevertheless, these two are no Harbaugh-esque game managers. Both men can sling a football, and both have a top-shelf receiving threat to work with in the passing game, someone to throw to when the running lanes close up with another eight yards between the ball and the imaginary yellow line.

Turnovers could eventually be Chicago's undoing. The defense lives on opportunity, and the unit has seven touchdowns from interceptions. There are three teams in the league that have scored fewer receiving touchdowns than the Bears defense.

The thing about turnovers, though, is the uncomfortable fact that randomness plays a role. Sometimes, the turnovers just don't come. Chicago, with a +16 turnover ratio, has been on the wrong side of the ledger twice this year: two weeks ago in a nail biter against the Panthers and a Week 2 loss to the Packers. The same thing happened to Houston against Green Bay. Schaub has four interceptions this season. Cutler has eight.

Potential Super Bowl previews tend to live up to the hype way better than rematches from the playoffs. This game should be a grind in every sense of the word, accompanied by the endless pop of protective plastics and plenty of grunting. In the end, it might come down to the quarterbacks, one best known as Michael Vick's former backup and the other an apathetic icon of hope. You should definitely give a shit about this one.

Jay Cutler is the absolute worst, and that's what makes him so wonderful. Every single week. (I also think he understands pro sports better than anyone in pro sports not named Rasheed Wallace?)

Chris Rock once said the most exciting relationships are with crazy people. ("You never know what you're gonna get next!") That's Brandon Marshall. It's been great all year in Chicago, and hopefully it stays that way, but who knows? In the meantime just enjoy the ride, complete with inexplicable Jesus rants on television. He's like the DMX of the NFL.

I know nothing about Charles Tillman except he's a defensive player of the year candidate in 2012, and he once sent this fantastic response to a Chicago teacher who disrespected the Bears. So yeah, Charles Tillman is cool with me.

Think of Andre Johnson as the hare that every defense schemes against, and then remember Owen Daniels, the sleepy tortoise who slips into the seam and does just as much as damage.

It's been 10 weeks, and this picture from opening day still haunts me.

The city content with calling itself "The Second City" has to be a place where everyone's comfortable in sweatpants. Going to a Bears game, or even just hanging around Chicago confirms this point. You might call it overly casual, but please remember this: as a city born from slaughterhouses and organized crime, a populace in sweatpants, jerseys, and drunk off only 12 beers a piece at halftime is a real improvement from the past.

For four months of the year, Chicago is America's most beautiful city. The other eight months--mostly the football months--it is a hellish wind-blasted frostscape survived only by huddling in bars for warmth. This makes Chicagoans our cuddliest citizens, though strictly for practical reasons of body warmth. They sometimes do this in their stadium, a Roman amphitheater that was eaten by an alien spacecraft sometime around 2002.

If Jim Cornelison sings the national anthem at this game, you may die of patriotism if not prepared. You have been warned. Bears fans are generally very nice, boisterous, and not at all like those bastards in Green Bay with the awful accents and cheese hats. Green Bay Packers fans will say the same about Bears fans, because they're actually really similar, and pointing this out makes both of them hate you.

Don't point this out to either, and use layers to smuggle in flasks of inexpensive street booze to the game. This will make friends, because people in Chicago love alcohol, fatty meat dishes, and violence. Chicago is our greatest city. Let no one else tell you anything different. 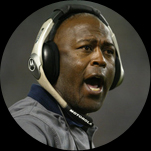 The Chicago Bears are potentially the best team in the NFC, which leads to a more important question: Can Lovie Smith fight? He looks like he can fight.

Would you want to step into the octagon with him? Let's consider all of the variables: 1. He's very, very quiet. Lovie has earned a reputation for walking quietly but carrying a big stick, and we all know that it's the silent ones you have to watch out for. 2. He's built like an NFL middle linebacker. Lovie has always been more on the muscular side, but he's trimmed down about 20 pounds for the 2012 season, and he now looks like he could rip someone apart with his bare hands. 3. You would never, EVER, see Jim Harbaugh slap Lovie on the back, and would never, EVER, see Jim Schwartz scream at him. They know Lovie can fight. They can tell. 4. He's from Texas. 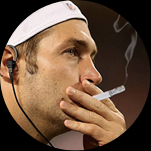 Is there anyone outside of Chicago that does NOT hate Jay Cutler? Seriously, what's that guy's problem?

To answer your first question: Probably not. But what's his problem? He's just sort of a prick. Look around your office, the library, or even your own house. Chances are you will be able to quickly point out someone that is not exactly congenial. And you know what? That's fine. He's got a job to do, and wants to do it to the very best of his ability. He wants his teammates and coaches to not screw things up. It doesn't matter if NFL fans like him. Being liked has nothing to do with his job. But while Cutler is busy getting hissed at by the general population, he has very quietly never been arrested, never beat anyone up, never done anything controversial, and has been spotted all over the world doing charity work as anonymously as possible. But that's fine; people will keep hating him. And he will keep not caring. 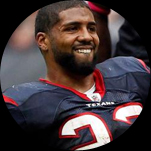 Mathematical projections have Arian Foster on pace for approximately 3,934,981 carries this year. Are Texans fans worried?

Why would we be worried? Look at the long and successful careers so many other recent workhorse backs had after exceeding 370 carries in a given season. Among recent examples, Larry Johnson, Shaun Alexander, Edgerrin James, Curtis Martin, and Jamal Lewis all showed zero effect from a similarly heavy workload. What's that? That's totally wrong? They experienced severe dropoffs in production after receiving 370+ carries in a season? Oh. Well, this is different. The Texans have Ben Tate. Excuse me? You know what? You're right...Tate is hurt again and barely touched the ball even when he did see the field this year. Neat. I need a drink. 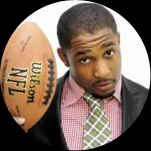 Last week, Mario Williams' first chance to square off against his former team received a whole lot of ink. Why isn't Amobi Okoye's opportunity for revenge getting the same pub? 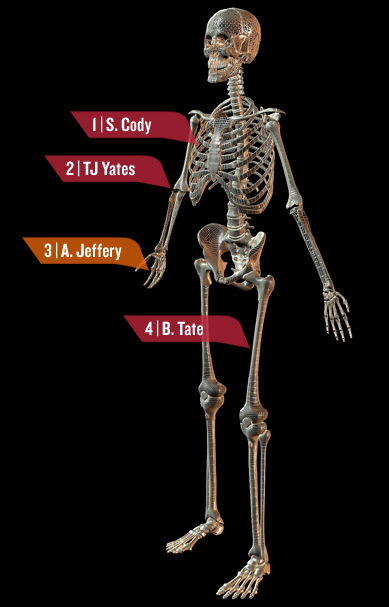 That doesn't sound like a football injury. Tony Romo played through one once.

You know, in case the Bears D kills Matt Schaub.

Damn rookie. But when Brandon Marshall is on pace for just under 120 receptions, 1,600 yards and 14 TDs, it's not such a big deal.

The guy where you think you're going to out-smart your entire fantasy league and draft him in case Arian Foster gets hurt. Which of course doesn't happen and then you're stuck with a guy who gives you four fantasy points a game. I'm not talking from personal experience or anything. 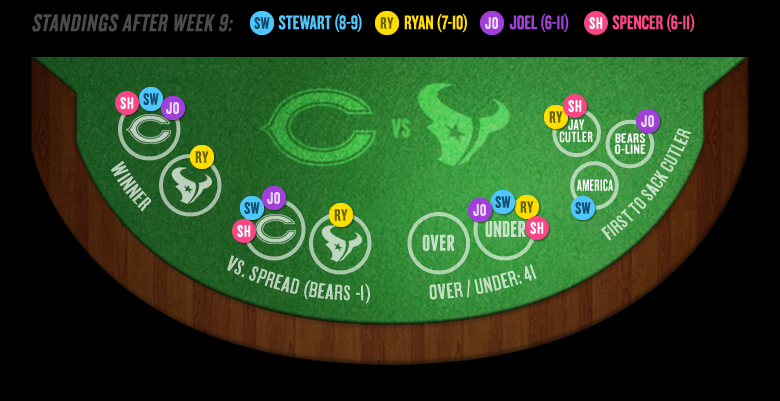 Statgasm: Step Away from the Alamo, Sir 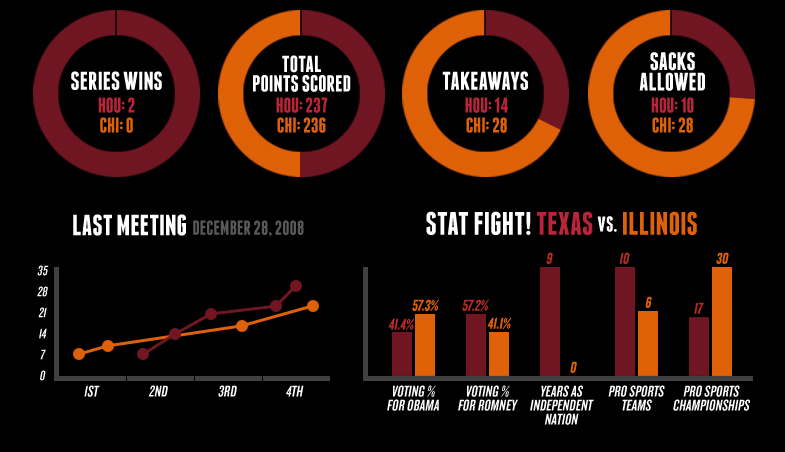 I would still have JJ Watt over Tillman as Def PoY, but it would be very close.

Jay Cutler on Smokin Jay Cutler: 'I get a kick out of that'‪ ‪http://cbsprt.co/VU30ce