We spent Thursday nights watching 13 of the worst NFL games this season. Let's reflect on the experience.

Share All sharing options for: Thursday Night Football is over and we're better people because of it

Last week's Thursday Night Football game, the last one of the season, ended in the most appropriate way possible. The Eagles and the Bengals combined for six fumbles and an interception. Cincinnati's defense won the game on apathy.

Complacency also describes how most fans felt about the NFL's first full season of mid-week games in prime time. Players and coaches were more openly hostile about it all.

It all began with the NFL sensing the opportunity to squeeze even more television money out of its product, either by pushing the NFL Network on cable providers, selling off a package of games to the unsuspecting rubes at Turner, or both. Andrew Sharp thoroughly deconstructed the notion of Thursday Night Football last month. I encourage you to read it.

Check out BYU vs. San Diego St. in the 2012 Poinsettia Bowl

I'm just here to look back on our journey together. I saw every single snap of TNF on the NFL Network, from Jay Cutler's four interceptions in Week 2 to Andy Reid going through the motions in Week 15. When you've lived through an experience like that, you owe it to yourself to reflect. Find a few morsels of knowledge to take with you. Next September really isn't that far away.

There were 13 TNF games on the NFL Network this season. Most of them turned out to be laughers -- sloppy, injury-riddled affairs. The average point differential in those 13 games was 13.5, almost two touchdowns. Eight of those games were decided by 10 or more points.

Each Friday morning, we moved quickly past the previous night's forgettable game. We should have paid more attention. Some of those Thursday games foreshadowed stories that would play out over the rest of the season.

'Same old Jay' - Packers' cornerback Charles Woodson grabbed one of the four interceptions Cutler threw in Week 2. After the game, he needled the Bears quarterback a little:

"It's the same old Jay," Woodson said. "We just need to be in position. Jay will throw us the ball."

The Bears shook off that Thursday night loss to win six-straight games. Preseason predictions of a potential Super Bowl run looked suddenly prescient. Then the Bears got right back to being the Bears, losing five of the next six. Chicago is now outside looking in on the playoff picture.

Red mirage - It seems like it happened in another season, the Arizona Cardinals winning four-straight games. But it was this year, September, when the Kevin Kolb-led Cardinals somehow camouflaged their shortcomings to win the first four games of the season.

The Cardinals came to St. Louis for a Week 5 game against the Rams. Kolb threw 50 passes, and was sacked nine times. He would go on to play one more disappoint game. That game was also the first loss in a nine-game skid that sent Arizona back to the basement in the NFC West.

First pick - Two teams are in the running for the first pick in the 2013 NFL Draft. Whether the Chiefs or the Jaguars get the top spot, they can thank a terrible Thursday night performance for the right to draft Geno Smith. The Chiefs lost to the Chargers in Week 9. A week later, the Jaguars lost to the Colts.

The NFL treated every team to a taste of prime time action this year, reserving Thursday nights for the games that ESPN and NBC didn't want. And who can blame them for passing on ratings-grabbers like the aforementioned contests?

Anyone can stink on Thursday - Cutler's struggles aren't particularly out of the ordinary for the Bears' quarterback. He's prone to some bad games. However, there was something about Thursday Night Football's ability to bring out the worst in some of the league's biggest names.

Drew Brees threw five interceptions and no touchdowns in a loss to the Falcons in Week 13. That game snapped his record for the most consecutive games with a touchdown pass, ending it at 54 games.

Cam Newton played his worst game of the season in a Week 3 loss to the Giants. He threw three picks and no touchdowns, though he did have one rushing score. The next day, the world set about reading Cam's facial expressions.

Remember this one? It made more than a few bettors sad when Niners' head coach Jim Harbaugh declined a safety at the end of the game, resulting in a 13-6 win. San Francisco was favored by 7.5 points. According to OddsShark, 75 percent of the money in that game was on the 49ers, making Harbaugh's decision to avoid a kickoff resulting from the safety a costly one.

This one also happened to be a pretty good game on the football merits alone. Stellar defensive play, grinding running games -- this was a throwback game. It was also the rare occasion when TNF featured two viable teams instead of the usual mismatches.

Viewers at home were also treated to one of the more ridiculous Harbaugh facial expressions of the season.

Was the AFC East always such a sewer of bad football, hidden by the golden commode that is the Patriots? The Dolphins and the Bills have been terrible for a few seasons now anyway. The slow, sad decline of the Jets has put that division in the NFC West's old territory. A game that could go a long way toward determining which team is the division's worst gets my nod for the worst TNF game this year.

There were four Ryan Lindell field goals, a punt return touchdown and a kick return touchdown that accounted for most of the scoring in a 19-14 Bills' win. Miami rookie Ryan Tannehill added one late in the fourth quarter to make the final score look closer than the game really was.

Nothing particularly ugly stood out about this game. It was just bad football from snap to snap. Shawne Merriman made a rare appearance, beating Jake Long to tackle Reggie Bush for a loss. The Dolphins missed a field goal wide right, and the Bills social media staff made peace with their team's troubling history with wide right. Bills' fans will also remember this one as the time Chan Gailey actually let C.J. Spiller do his thing, carrying the ball a season-high 22 times for 91 yards. Who do you think set up all those field goals?

The best highlight from the entire game was this guy wearing an over-sized novelty plastic drumstick on his head because, you know, Buffalo. 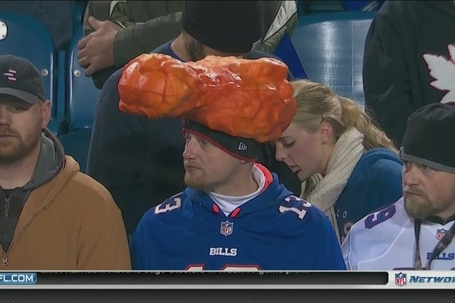