I'm sorry to hear that your fantasy football team failed to win the championship. Just know that it isn't your fault. Fantasy football is dumb, and everyone else is dumb except for you.

Your failure to win your fantasy football league this season was not, in fact, your failure. Rather, it was the failure of the fantasy football format at large. It does not reward highly intelligent, analytical people like you. Remember that time you solved all the table puzzles at the Cracker Barrel? You're basically K-PAX, only cool and not a nerd because you like sports.

As you learned, fantasy football rewards blind luck. Anything resembling strategy or cunning is an illusion. Let's take a look at how your draft picks panned out, and agree that you should never play fantasy football again.

(The statistics below are based on Yahoo!'s average draft rankings for each player, and their totals in standard scoring leagues.) 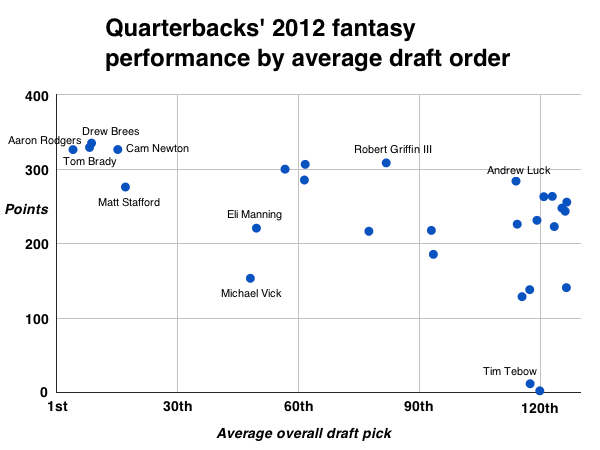 You know this already because you are very smart, but the closer to the upper right of this chart, the more value you got out of your draft pick. The most important lesson demonstrated here is that there were plenty of perfectly decent quarterbacks to go around for everyone, especially if you were in an eight-to-ten-team league.
The best fantasy quarterback (Drew Brees) and the ninth-best (Andrew Luck) were only 51 points apart. That's only about three points per week. To boot, the top four quarterbacks were more or less equally valuable. You may as well have spent your first-round pick on an elite running back or wideout, and waited to grab a Peyton Manning or Andrew Luck in the later rounds.

Why your cunning and well-considered quarterback selection didn't pan out: 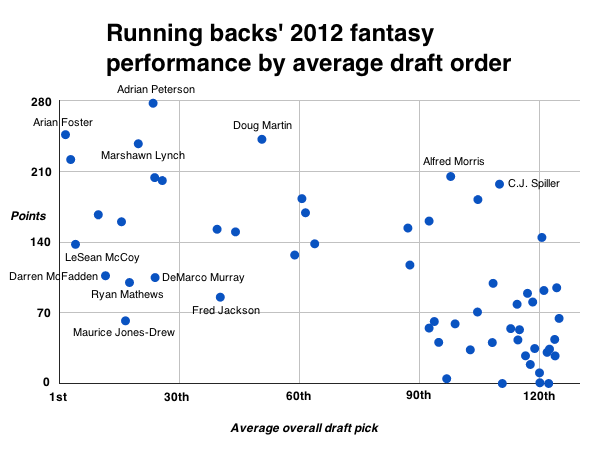 Drafting a running back, meanwhile, was far more dangerous. You drafted Ryan Mathews over Adrian Peterson because you are a football insider, and a few picks later, your novice friend selected Peterson because he recognized his name from a Subway commercial or something. Just keep in mind that you are smart and that he is either not as smart or not smart at all.

Consider this: the running backs selected within the first 30 picks scored an average of 171 points, while those selected with the 31st through 65th picks averaged 156. That's a difference of approximately one point per game.

Why your cunning and well-considered running back selection didn't pan out: 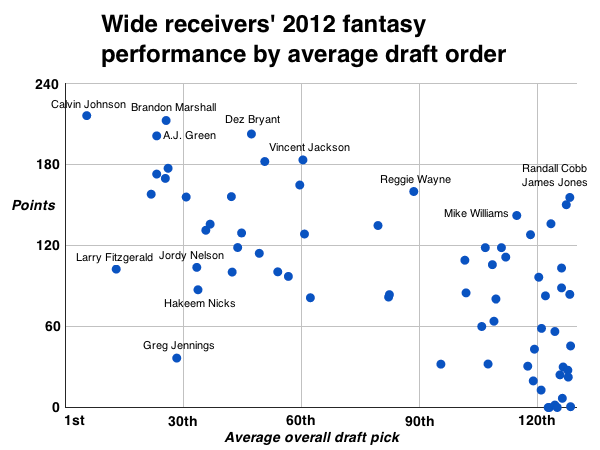 Going forward, Calvin Johnson should probably be regarded as the surest bet in fantasy football. Last season, the numbers of his quarterback, Matt Stafford, were off the charts, and Johnson finished as the league's best fantasy wideout. This season, Stafford faltered statistically, and he only found Johnson for five touchdowns (as compared to 16 last season). Megatron remained the top wideout anyway by breaking the NFL's single-season record for receiving yards.

You didn't get to select Calvin Johnson. Well, I mean, you could have passed on LeSean McCoy to get him, but there is no way of knowing who will be good or bad in football because of low sample size and Spygate. Regardless, it seemed worth your while to invest a top-round pick in a top-tier wideout -- seven of the first eight wideouts selected enjoyed good-to-great seasons.

Why your cunning and well-considered wide receiver selection didn't pan out:

Lessons learned from the 2012 fantasy season: