Dog Football! Which Breeds Are Best Suited For The Gridiron?

Inspired by a quote from Best in Show, SB Nation goes inside the Westminster Kennel Club Dog Show to determine the canine breeds best suited to play each position on an all-dog football team.

Share All sharing options for: Dog Football! Which Breeds Are Best Suited For The Gridiron?

Fred Willard, playing the crass and clueless dog show announcer Buck Laughlin, uttered this question during his scene-stealing performance in the 2000 mockumentary Best in Show. As the Westminster Kennel Club Dog Show approached, the question took root in my head and branched in obvious directions: if Buck wanted to know which dog would play wide receiver or tight end, surely then he would also need a dog to play quarterback; a canine offensive line to protect him from doggie defensive ends; a four-legged tight end to bail him out when the paw-ket collapses. (I will not apologize for any past or future dog puns.)

I spoke to David Frei, director of communications for WKC and the voice of the show's telecast -- not to mention a former employee of the Denver Broncos and San Francisco 49ers -- about which breeds would be best suited to play which position on the gridiron.

Frei's insight proved invaluable in creating my final roster, which is depicted in the image below (click for larger). For the sake of argument, these dogs have opposable thumbs and can understand the purpose of sporting contests. 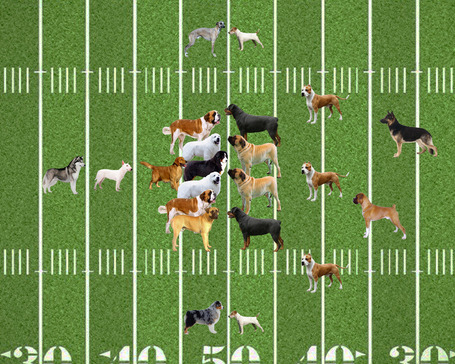 QB: Golden Retriever. Disney's Air Bud: Golden Receiver unfairly relegates Bud to wide receiver, likely because he plays on a team of humans who have more manual dexterity. But in my fantasy world of dog football, the Golden is a perfect quarterback: intelligent, charismatic and athletic without being the fastest or strongest. Women who don't know anything about the sport love him.

RB: Siberian Husky. There are faster dogs, and there are dogs who are better open-field runners, but the Siberian is an excellent combination of speed, strength and endurance. Despite their unidirectional sledding pedigree, they're surprisingly nimble, and their compact size helps them get through the first level of the defense. Great burst.

FB: Bull Terrier. I was unhappy with my initial proposal of the Bulldog here, as I sacrificed speed for strength and low center of gravity. The Bull Terrier is a better fit: hard-nosed and short, but a great deal faster and more agile than the Bulldog. Besides, what better dog to occupy the position of Runaway Beer Truck than Spuds Mackenzie?

WR1: Whippet. I was initially skeptical of Frei's suggestion here, fearing that the thin dogs may not be able to handle the physicality of football, but the general consensus at the WKC Dog Show suggests I judged too quickly. Whippets have the short-distance speed of a greyhound (same 40 time, I think) but are a great deal more agile and hardier than I gave them credit for. They're like DeSean Jackson, but more likely to play well in a contract year.

WR2: Australian Shepherd. The ultimate combination of speed, agility and catching skills in the dog world. Like Wes Welker without the Super Bowl-losing drops.

OL: Mountain dogs (various). There isn't a mountainous region of Europe that doesn't have its own mountain dog, most of which could play offensive line thanks to their size and protective skills. In the image above, I've got Saint Bernards at tackle for their size, Great Pyrenees at guard for their Basque heritage (immovably stubborn with a mean streak), and a Bernese Mountain Dog at center for no better reason than I think they're really cute. Hey, even coaches have favorites.

NOTE: As I go through the defensive positions, I'm going to touch upon several dogs that have gotten bad reputations over the years. In general, these dogs have been perceived as dangerous because their human caretakers have exploited certain instincts bred into them that made them valuable guard dogs -- the same instincts that make them caring family dogs in the right environment. Remember: this is an article about dogs playing football. Don't be the person who brings up dog fighting. Nobody likes that person.

DE: Rottweiler. Great range in size means that they can bulk up to play DE in a 4-3 or be a rangier 3-4 OLB. Aggressive and fearless, with a German efficiency in its musculature.

LB: Pit Bull. In the world of purebred dogs, I should designate either the Staffordshire Bull Terrier or the American Staffordshire Terrier here (a pit bull doesn't have proven lineage). But are you gonna tell a pit bull he can't play football with the other dogs because you don't know who his daddy is? AW HAIL NAW.

CB: Jack Russell Terrier. Cornerbacks tend to be speedy, undersized guys with the ability to make lightning-fast stops and starts. Throw in a terrier's ferocity, and there you go. (Note: Jack Russells aren't recognized by the American Kennel Club and thus don't appear at the Westminster Dog Show, but I don't see how that affects their ability to play cornerback in my fictional world.)

SS: Boxer. Fast, muscular, pugnacious, great jumpers. This is the eighth man in the box who dives over the pile to stop the running back on 4th and 1.