The Indianapolis Colts said basically nothing in a short statement on Friday addressing Peyton Manning's health. After Jim Irsay's salty late-night tweet on Thursday, we expected better. If you missed it, sources told Chris Mortensen that Manning was cleared to resume his NFL playing career after deeming the Colts' quarterback's neck was stable. Irsay then wagged his finger with a tweet, saying the Colts have not cleared Manning, promising a statement in the morning.

And then the team released a statement that said, basically, "We're just going to focus on the Super Bowl in our city right now." But along with that statement was a photo. And the photo was just odd... 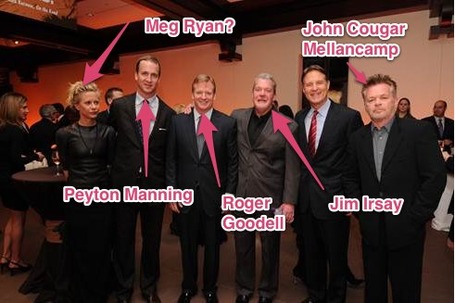 Is that Meg Ryan on the left-hand side of the photo? And why is the other bookend here John Mellencamp (we think)? Who is that man between Irsay and Mellencamp? And why is Goodell between Manning and Irsay in a photo that accompanies a story about the Colts quarterback and his owner being closely unified? Is it a sign?

(Edit: The mystery man is Senator Evan Bayh. Thanks, Twitter friends! Ryan and Mellencamp are also romantically linked, with the latter hailing from Indiana. And with that, my knowledge of the state, and pop culture, increases exponentially).

This, friends, was clearly the most important part of the Colts statement.