Peyton Manning With The Broncos: How Will He Perform In Denver?

Does Invesco Field's altitude help quarterbacks play better? It seemed like a stupid question at first, but after looking at the numbers ... it appears to be true. Jon Bois attempts to address this and several other Peyton Manning questions.

Share All sharing options for: Peyton Manning With The Broncos: How Will He Perform In Denver?

We're over five months removed from the 2012 NFL season when Peyton Manning will play his first game with the Denver Broncos. Between now and then, there's really nothing to do but stare at football statistics and stare and stare and stare and maybe mumble some sort of statistical conclusion at some point. So, let's do that!

Batted baseballs and kicked footballs travel further in Denver's thin air, so it would seem obvious that a thrown football would also travel further. That's "further," of course, which isn't the same as, "more accurately." Regardless, we can probably agree that the altitude affects a quarterback's performance, whether positively or negatively, and whether to a small to degree or a large degree.

Stick with me, here. First, I looked at average home vs. road passer ratings of every NFL quarterback (to record at least 10 pass attempts) in 2011.

Both those averages represent a sample size of around 260 games. The difference isn't a dramatic one, but we can say this: generally, quarterbacks perform at least as well at home as they do on the road, and perhaps they benefit just a bit.

This flies in the face of the trend we saw above, and doubly so -- opposing quarterbacks' passer ratings spike five points when they play in the Broncos' Invesco Field. These parameters offer a constant, too: they're playing against the same defense. All that changes is the venue.

Honestly, I'm pretty surprised to come to this conclusion. But with this in mind, the performances of the last few quarterbacks to spend portions of their career with the Broncos makes sense: 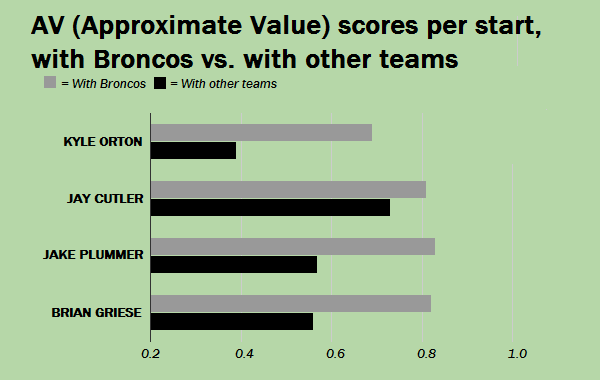 Manning himself has only four career starts in Denver: two good games and two bad games, which doesn't tell us a whole lot. But it certainly does seem as though playing a mile above sea level could help him to some degree.

I wonder whether Manning knew that. And of course, I'm just looking at the numbers, I'm not delving into the actual physics of a thrown football. But one thing quarterbacks can lose with age is velocity, and now that Manning is about to turn 36, perhaps the thin air could offset this trend a bit.

Does Manning depend upon an undisputed No. 1 receiver? 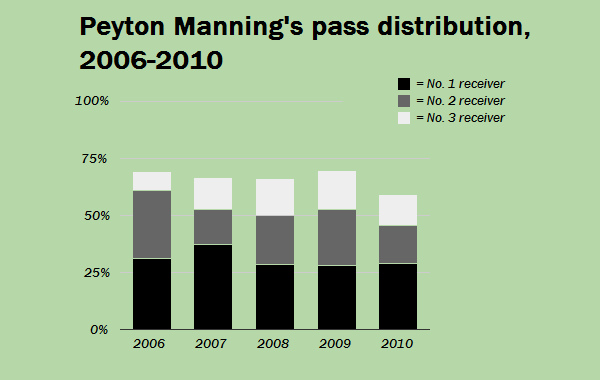 The point here is that while more talented receivers are, of course, always appreciated, Manning is capable of tailoring his distribution to his offense's resources. Broncos receivers Eric Decker and Demaryius Thomas are young and talented. And perhaps the Broncos will take another look at the 2012 draft board and go with Baylor wideout Kendall Wright.

Manning won't have any elite receiving targets, but he should have just about all the talent he needs.

Do the Broncos need to establish a robust running game for Manning to succeed?

It's relatively difficult to judge the quality of the 2012 Broncos' running game. Willis McGahee was very good last year, but he turns 31 this year. No other Denver running back had more than 100 carries last season.

The Broncos still have some cash, and if they felt the itch, they could look at a quality free agent like Michael Bush, Cedric Benson or Ryan Grant. I think their money would be better spent elsewhere, though. Peyton Manning became one of the very greatest quarterbacks in NFL history with the following running games:

The Colts usually had a below-average run game. HOWEVER: it's worth noting that the last time the Colts finished over the 50th percentile in this department -- 2004 -- Manning had the best year of his career to date.

So Manning's going to be good, right?

Well, I predicated this entire thing on the presumption that his nerve issues are leaving him be for long enough to allow him to play like Normal 36-Year-Old Peyton Manning. If that's the case, the thin air will probably help him, his receiving targets should be fully capable of pulling their weight, he doesn't need a great running game, and the Broncos' offensive line is pretty good.

Denver's defense wasn't great last year, but it's important to remember that the offense gave away the ball a lot, and turnovers make things very tough on a defense.

No one in the AFC West had a winning record last season, which figures to portend great things for the Broncos, but it's almost as dangerous to be surrounded by three recently-mediocre teams. Those dudes could trend up or down. The Chiefs, Raiders and Chargers all have talent, and they were all hit hard with injuries in key positions last year.

The division isn't a lock. Neither, of course, is the effectiveness of a 36 year old who just took a year off. But everyone's placing the Broncos as the favorites not only to win the division, but to compete in the playoffs. And everyone's probably right.