Following the rulings being handed down in the New Orleans Saints "Bountygate" scandal, Warren Sapp and Jeremy Shockey got into a bit of a virtual slapfight on Twitter. In short: Sapp accused Shockey of ratting out the Saints and their defensive bounty, at which point Shockey protested, "Nuh-uh!" Long after Sapp lost interest in the fight he picked, Shockey kept valiantly defending his own honor. On Thursday, he presented photographic evidence proving, one and for all, he's not the snitch.

Shockey sent out a Tweet reading "The truth shall set u free!" with the following picture attached: 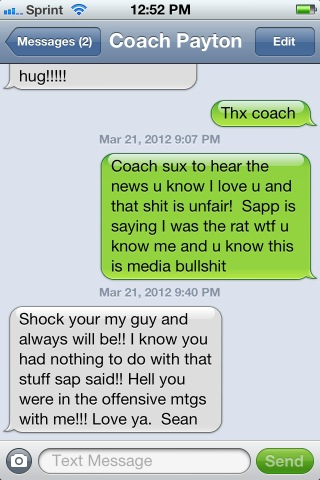 So there you have it, folks. incontrovertible evidence that Shockey is not the rat. Hopefully, his running inside and saying, "Coach! Coach! Some big old dumb-face said I was a tattletale!" will put this The Departed-level tale of intrigue and cover-ups to rest.

Actually, what I'm most interested in is the text message cut off at the top there, where discussion of hugs is taking place. What sort of foul huggery are the Saints getting up to behind closed doors? I hereby dub this new twist in the tale "Hugglesgate."