Report: Rex Ryan Says No Hard Knocks For The Jets In 2012

Share All sharing options for: Report: Rex Ryan Says No Hard Knocks For The Jets In 2012 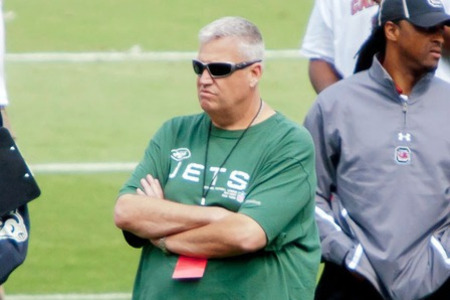 If there's one team in the history of the NFL that absolutely needs to be on HBO's Hard Knocks, it's... Well, it's training camp with Barry Switzer's out of control Dallas Cowboys in 1998.

But other than that, this year's Tebow-powered Jets team would have been perfect.

The 2010 Jets were the last team to open their doors for Hard Knocks, and nobody's ever done it better. You had Mark Sanchez, Shakeweights, discreet meetings with Darrelle Revis' agent at pancake houses, Antonio Cromartie remembering his kids' names, The Terminator (John Connor), Danny Woodhead before he became Welker Lite... But the undisputed star was always Rex Ryan.

And apparently Rex is the one keeping it from happening all over again.

From a report at Fox Sports:

League sources tell FOXSports.com that owner Woody Johnson wants his team back on the HBO hit show and has communicated that to the network. But his outspoken coach is against the project. Ryan, according to sources, does not want any more of a circus type atmosphere around the Jets after last season's bickering and collapse and this offseason's trade for Tim Tebow.

This just sucks. Rex is right, obviously; doing Hard Knocks is insane for any team, but especially a group like the Jets. HBO's alternatives may include a duel show with the Harbaugh brothers--covering Ravens and 49ers training camp--and that would be kinda cool, but it's nowhere near the outright chaos we'd be getting with the Jets.

Unrelated, and also from the Fox Sports story: "The Jacksonville Jaguars, ranked last in the latest Harris Interactive Poll for league popularity, have told HBO they would love to do the show." That's pretty much the saddest sentence ever.