Amid the all the buzz about the 2012 NFL schedule being released on Tuesday, a honey of a story somehow slipped past the Internet hivemind. With all the workers swarming to cover the latest news about "Monday Night Football" and how many prime-time games will feature Peyton Manning, they nearly flew right past a delightful sweet morsel of information: the Pittsburgh Steelers have released a picture of their new 80th anniversary throwback jerseys for 2012.

Throwback jerseys, of course, are all the rage. They're popular and usually look quite sharp. The official Steelers Twitter feed sent out a tweet on Tuesday that included a shot of Isaac Redman modeling the new (old) look. 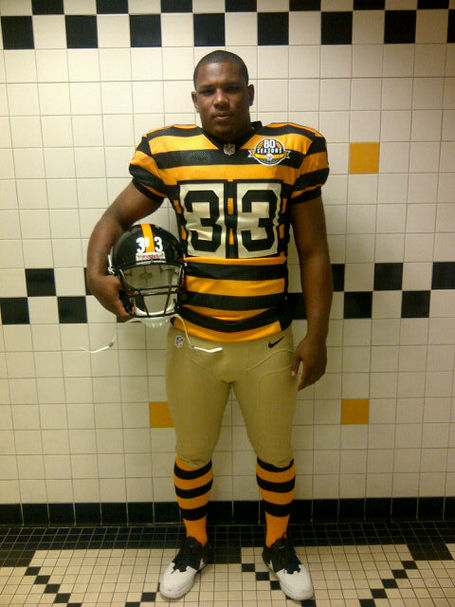 It was nice of Redman to take some time out of his busy schedule to model the new jersey in an elementary school bathroom while looking forlorn.

My, that is an attractive look. You could almost lure a queen while wearing that thing! That's a look so dangerous, you could almost get stung by it! I wonder if it comes with a matching yellow jacket? We should all bee sure to keep an eye out for these in our local corner replica-jersey shops.

For all news and information regarding the Pittsburgh Steelers, please visit Behind the Steel Curtain.