Terrible news for Detroit Lions fans: a fan vote between Cam Newton and Calvin Johnson to see which player would be featured on the cover of Madden NFL 13 ended up with Johnson taking the honors along with, of course, the hypothetical Madden Curse that goes along with it.

It's been a decent off-season for Johnson: first the wide receiver signed an 8-year, $132 million contract with the Lions, now he's on the cover of a video game:

Here's a picture of Johnson in Times Square, courtesy of Eric Fisher from the Sports Business Journal's Twitter: 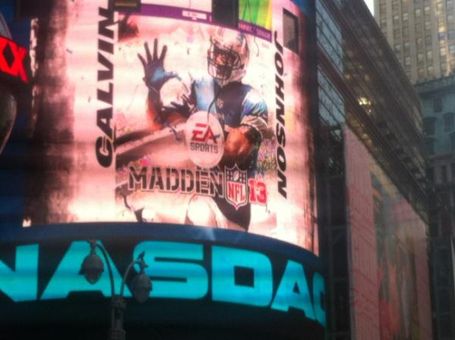 Last year's cover athlete Peyton Hillis stated before the season that he wasn't worried about the curse. Then he ran for only 587 yards, and now he's a believer. Hopefully, the same won't happen to Johnson, who led the league in receiving yards and touchdowns last season. This marks Megatron's first appearance on the cover of a video game since... do they have Transformers video games?

For more on Johnson and the Detroit Lions, check out SB Nation's Pride of Detroit.